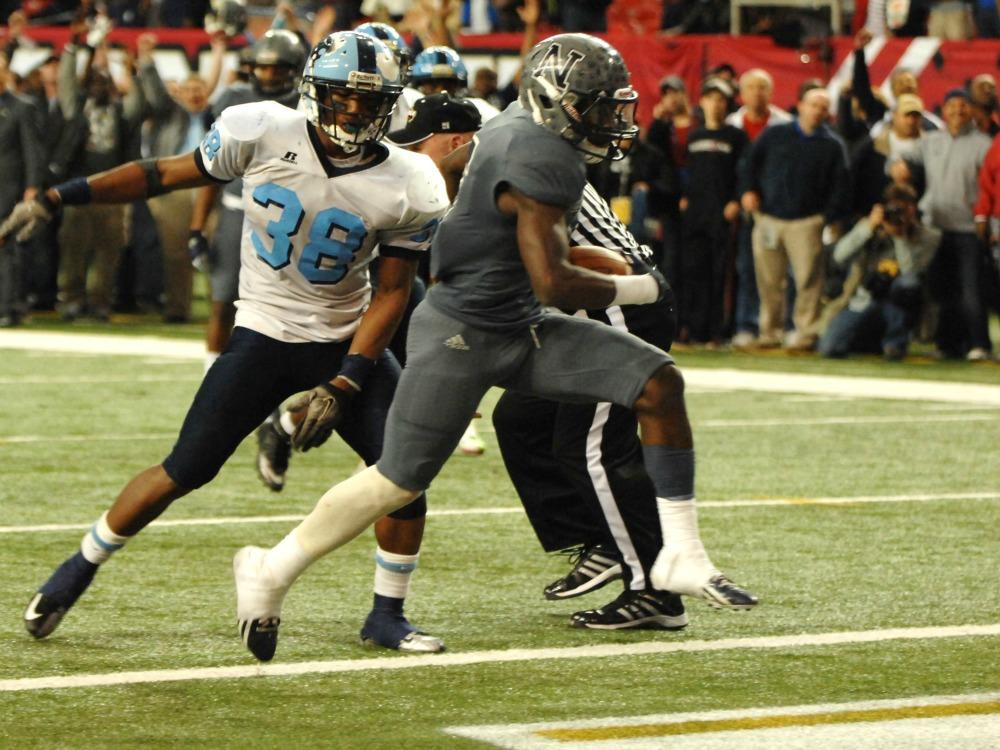 In a game that featured two of the state’s best senior running backs, one was able to make the crucial plays down the stretch while the other could not overcome a blistering defense determined to stop the run at all costs.

Norcross’ Alvin Kamara strapped his team to his back in the second half and rallied the Blue Devils back from a 14-3 hole to win the first Class AAAAAA state title in GHSA history 21-14 over Lovejoy. Kamara finished with 121 rushing yards and one touchdown on 33 carries, but it was a 61-yard touchdown reception that flipped the scoreboard, allowing the Norcross defense to take care of the rest.

Travis Custis will head to Georgia Tech next season, but he first wanted a state title. At halftime, it looked as though he may have one as he rushed for 57 yards on nine carries. Lovejoy quarterback Alejandro Bennifield found receiver Jumichael Ramos for a 60-yard score and Lovejoy, with a speedy defense, led at intermission.

After the break Norcross managed a 30-yard Joseph Mahfood field goal, but Bennifield went back to work, finding Brandon Davis for a six-yard score as Davis atoned for an earlier drop that might have also gone for a touchdown.

The fourth quarter started off with a bang, however, as Norcross coach Keith Maloof dipped into his bag of tricks for a halfback pass as Kamara found Clinton Lynch for a 35-yard gain.

“I just threw it up and Clinton made a great catch,” admitted Kamara. “That sparked the drive we had.”

Norcross quarterback Joseph Wilbur, who had been under heavy pressure throughout the first three quarters, sat in the pocket long enough to find Trey Smith on a crucial third-down play to get a fresh set of downs. Wilbur then found Myles Autry on third and three for an 11-yard touchdown reception.

“It took a little bit out of us offensively, not being able to use (Autry at the beginning of the game),” said Maloof. "He wanted it and we were able to mix him in and limit him. He came in and (had) an impact. He made a great play.”

After a failed two-point attempt Norcross still trailed 14-9, but the Blue Devils' defense would hold, giving Wilbur, Kamara and company the ball with 5:28 to play. Less than one minute later, with the Blue Devils facing third and 19, Wilbur dropped back and found Kamara streaking down the field.

“We knew we had a mismatch with the linebacker and (Wilbur) made a heck of a throw,” said Maloof. “He put it right where he could catch it. We knew we had to give him time to throw. He’s a heck of a quarterback. We knew if we gave him time, he’ll get it to our receivers to make plays.”

“I told Joseph ‘launch it and I’ll go get it,’” said Kamara. “He put it in the perfect spot and our (offensive line) had the perfect protection and we got it done.”

The defense would limit Custis to just two yards in the second half on 11 carries, but the two biggest carries came on third and one, when Norcross popped Custis for no gain and then pushed him backwards on the fourth-down attempt.

Norcross then once again handed the ball to Kamara.

“At halftime, Coach Maloof came to me and said we’re going to get you the ball and feed you,” Kamara revealed. “All the coaches told me to take over the game, and that’s what I tried to do with my team behind me.”

Kamara picked up a huge first down on third and eight after Lovejoy burned its final timeout. He would score several plays later from 10 yards out.

“We knew we could wear them down,” said Maloof. “We almost had them worn down a little bit in the first half. At halftime, we went back and said we’ve got them, we can’t let them get to us.”

The defense iced the game with an interception and Norcross would celebrate the program’s first state title.