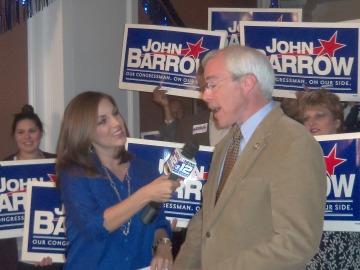 The Congressman did a round of interviews with local media.

"One reason I'm encouraged is I get an awful lot of people all over the district who are coming to me saying, 'Look, I usually vote Republican but I'm voting for you,'" Barrow says.

Earlier, the Augusta Democrat traveled to Dublin, Statesboro and Waynesboro before heading back to Richmond County to wave signs.

Barrow is running hard against Republican Lee Anderson in the biggest congressional race on Tuesday's ballot in Georgia.

Anderson, a Grovetown State Representative, is trying to keep John Barrow from getting a fifth term

Anderson is boosted by a district recently redrawn to favor Republicans.

He's been tying Barrow to President Obama in his ads.

The GOP candidate this evening is with supporters at a catering business in Evans.