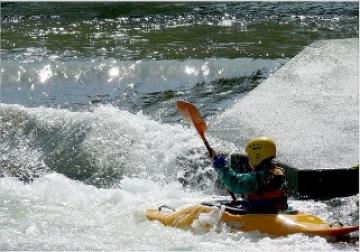 Columbus city leaders Wednesday unveiled a strategic master plan to capitalize on the tourists expected to come to the city’s new whitewater facility. Organizers are hoping the area’s strong public-private partnerships will take economic development to the next level.

The 14-million dollar Whitewater Columbus facility is expected to draw nearly 200-thousand visitors each year. A contracted consulting firm recommends the community develop areas on the up side of the Chattahoochee River where visitors can view the whitewater run.

The goal is to make the riverfront a destination, with more bike paths and walkways as well as interactive fountains. Some suggestions for private development include a zipline, rock wall and vendor kiosks.

Douglas Smith, president of the consulting firm EDSA, recommends public-private partnerships to develop plazas along the river where people can view the whitewater run.

Smith says “We are making recommendations about things like potentially a culinary arts facility, a children’s museum, a contemporary arts sort of interactive facility.”

The whitewater facility is currently under construction and is expected to be completed in about a year.

Smith says the next step is up to the community to figure out how they can take advantage of the huge draw of Whitewater Columbus.