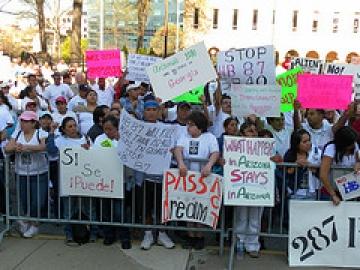 State Attorney General Sam Olens is asking the 11th Circuit Court of Appeals to consider lifting an injunction preventing a Georgia law from going into effect.

A three judge panel of the Appeals court ruled that the law may supplant federal law. The panel granted an injunction against it while a District court considers the state’s new immigration law.

This latest battle is over whether it can go forward while that case is pending.

The court did approve another section of the law. The so-called “show me your papers” section allows police to investigate a suspect’s immigration status and take illegal immigrants to jail.

Before either section of the law can move forward, the District court will have to rule.