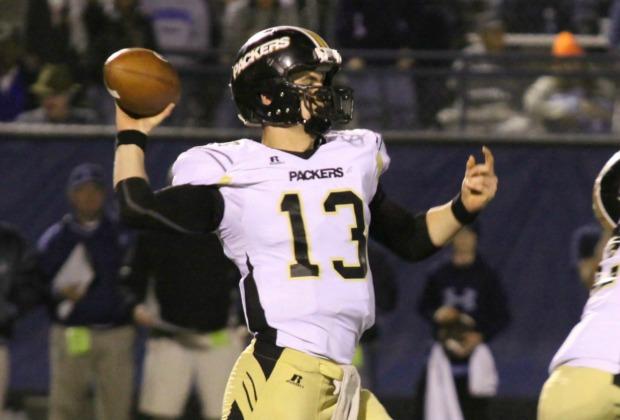 Class AAAAAA
Brookwood 31, Mill Creek 21: Brookwood scored two touchdowns in the fourth quarter to complete a come-back win. Jamaal Cole scored three rushing touchdowns for the Broncos, going for 88 yards on the ground while Josh Brown had 224 yards rushing. Brookwood’s Ky Priester had an 80-yard punt return for a touchdown. Mill Creek’s Jacorey Lewis, who rushed for 182 yards and a touchdown, left in the third with an injury.

Etowah 34 Centennial 0: The visiting Eagles opened the scoring on an 11-yard run in the first quarter by Stanlee Logue. They came back and put up seven more when Maveric Rechsteiner took an interception 72 yards for the score. Etowah’s third score was on a 21-yard pass from Reeves Johnson to Bryce Coroi to give the Eagles a comfortable 21-0 halftime lead. The Eagles went up 34-0 on an 11-yard run in the fourth by Raishod Devezin.

Langston Hughes 27, Luella 7: Defense was the story for the visiting Panthers as they forced six turnovers, including a blocked punt, to beat the host Lions 27-7. Eric Teek returned an interception for a touchdown for the Panthers, who improved their record to 2-0 with the victory while Luella fell to 0-2 on the season.

Lassiter 49, Sprayberry 10: The visiting Trojans exploded for 42-3 halftime lead, then cruised to victory over east Cobb-neighbor Sprayberry. Quarterback Eddie Printz was 14-of-22 for 277 yards and four touchdowns. Wide receiver Ryan Jenkins had two catches for 95 yards and two scores. Lassiter’s Juwan Dickey had seven receptions for 125 yards and a touchdown.

Lowndes 31, Newton 0: The host Vikings jumped on the visiting Rams early and often as they cruised to a 31-0 shutout victory to earn their second victory on the young season while keeping Newton winless. Ahman Brown and Nicholas Burgman each scored two rushing touchdowns to lead the Vikings in the rout.

Morrow 12, Forest Park 6: Xavier Essex scored the go-ahead touchdown with just over one minute to play as the host Mustangs snapped an 11-game losing streak by beating the visiting Panthers 12-6. Courtney Heard tallied more than 200 yards total offense, while Sterling Taylor caught a touchdown pass to add to another 100-yard receiving game.

North Forsyth 35, Dawson County 28: The visiting Raiders were able to come from behind on Dawson County to pull out a close victory. The Tigers took advantage of a pair of kick-off returns for touchdowns, but in the end the Raiders closed the game out scoring three touchdowns in the final four minutes to get the win.

Shiloh 16, Redan 7: The Generals turned over the ball four times and had an extra point blocked, but managed to hang on for a victory over visiting Redan. Shiloh’s offensive highlights were a 46-yard touchdown pass from Devante James to Cameron Stewart and a 1-yard plunge by tailback Deshon Taylor.

Wheeler 33 Pope 0: The visiting Greyhounds were dominated start to finish from both sides of the football. Two Wildcat field goals and 62 and 51 yard Elijah Staley touchdown throws put the halftime lead at 19-0. A defensive scoop and score on a Greyhound missnap and then a 64 yard touchdown run by Kahlem Looney pushed it out of reach and the Wildcats ran away with the shutout victory.

Class AAAAA
Allatoona 36, Paulding County 0: The visiting Buccaneers scored all of their points in the first half and cruised past host Paulding County. Quarterback Jeremy Uzee threw two short touchdown passes (one each to Tony Perkins and Tommy Davis) before running backs. T.J. Herron, Joshua Bautista all found pay dirt for Allatoona.

Creekside 18, Westlake 7: Preceded by a season-opening loss to Langston Hughes last week, Creekside picked up its first win as a member of Class AAAAA as it held off visiting Westlake. The Seminoles took a 12-0 lead into the fourth quarter and then answered Westlake’s only score of the game when Evan Berry returned the ensuing kickoff for a touchdown.

Heritage-Conyers 34, Rockdale County 7: The visiting Patriots handled cross-town rival Rockdale County using special teams and their ground attack to bully the Bulldogs. The Patriots had rushing touchdowns from Mercer Bradley, Marshal Taplin and quarterback Ryan Sutton. The Patriots got a touchdown on a blocked punt by Terrell Williams to give the Pats a 14-point cushion in the third quarter.

Kell 27, Woodstock 10: The host Longhorns took care of business at home beating Woodstock handily. The game got off to a rocky start for the Longhorns, who gave up a safety but then took control of the game by scoring the next 17 points. Woodstock’s defense played admirably recording a pair of safeties, but the Longhorns proved to be too much to handle in the end winning comfortably.

Lakeside-DeKalb 28, Dunwoody 14: Quarterback Nick Alexander and running back Bradley Earnest were the offensive stars for the visiting Vikings. Alexander completed 17 of 24 passes for 229 yards and a pair of scores. Earnest added the other pair of touchdowns for Lakeside on the ground. On defense, linebacker Kyle Smith intercepted two passes.

Loganville 32, Walnut Grove 13: Bernard Merriweather rushed for 130 yards and two touchdowns as the host Red Devils ran past the visiting Warriors in the second half 32-13. Brandon Moncrief caught two Josh Laughlin touchdown passes, while Tony White ran for a late 55-yard score to help lead Loganville to its first victory of the season.

Whitewater 30, Mundy’s Mill 18: The visiting Wildcats rushed for 250 yards as Kendall Connely paced the ground attack with 161 yards and three touchdowns. Linebacker Josh Alexander added an interception for Whitewater and gained 102 yards returning punts and kickoffs. The Wildcats also recorded a safety on a botched punt.

Creekview 34, River Ridge 14: Wide receiver Connor Dulmage had a reception for a touchdown and a rushing score off a reverse. Hayden Hall scored on a quarterback sneak, and Hunter Udall returned an interception for a touchdown. Kickers Connor Frazier and Ben McClellan each added a field goal.

Griffin 34, Northgate 6: The visiting Bears dominated Northgate, handing the Vikings their second loss. Griffin was led by quarterback Jaquez Parks who threw for 240 yards on 15-of-25 passing, including a 12-yard touchdown pass to Trey Willis. Back-up quarterback Anferney Stroud also was impressive going 5-for-5 for 80 yards and a 52-yard touchdown pass to Montico Godson.

Lamar County 41, Eagle’s Landing 30: The host Trojans got off to a hot start and held on for a win over Eagle’s Landing. Sidarius Gotell scored from five yards out on the opening possession. Then, Jason Caslin blocked a punt on the Golden Eagles’ first possession for a safety. Lance Austin added two touchdown passes and Jeremy Fletcher scored twice on running plays for Lamar County.

Lanier 17, Oconee County 14: The visiting Longhorns squeezed edged the Warriors thanks to a pair of touchdown passes from quarterback Taylor Grant. Grant connected with Marty Sanders in the second quarter and found Jahbri Jones in the third quarter. Kicker Mason Harwood kicked a game winning 42-yard field goal to cap the scoring.

Union Grove 22, Woodland-Stockbridge 14: The visiting Wolverines were able to pull out the victory. Union Grove got the victory behind their ground attack and leading rusher Derrick Craine. Craine led the team offensively and rushed for all three of the Wolverines’ touchdowns.

Washington 34, Lithonia 16: Antavis Rowe rushed for 90 yards and added a receiving touchdown as the visiting Washington Bulldogs took down the hosting Lithonia Bulldogs 34-16. Frank Barthelemy rushed for two first half scores before leaving with an injury to help drop Lithonia to an 0-3 start to the season and keep Washington undefeated.

Class AAA
Adairsville 55 Armuchee 0: After a scoreless first quarter, the host Tigers piled it up on the Indians with 28 second quarter points. Quarterback Marcus Childers had a big night passing for the Tigers with 285 yards and three touchdowns and surpassed the century mark on the ground. Hiram Velez caught a Childers touchdown pass and returned a punt for a score in the commanding shut out victory.

Cedar Grove 30 Douglass 7: The visiting Saints forced a safety and generated two first-half touchdowns off 30-yard rushes by Bryson Allen-Williams and quarterback Jonathan McCrary. Jamir Hannah scored on a 35-yard pass from McCrary in the third, and Shane Ward ran 12 yards for a touchdown in the fourth quarter.

Decatur 46, Therrell 7: The Bulldogs dominated the visiting Panthers with a balanced offensive attack and a stifling defense. Decatur had 391 total yards of offense, with 215 coming on the ground. Three of the six Bulldogs’ touchdowns were on the ground. Quarterback Devontae Carter had an impressive showing completing 15 of 19 passes for 176 yards and three touchdowns.

Class AA
Greater Atlanta Christian 31 Apalachee 21: The host Wildcats struck first with an Eric Tanner 24-yard touchdown run that came in the first quarter. The Spartans’ Kyle Scales answered with a monster 63-yarder and then proceeded to bulldoze the Wildcat defense the rest of the game. Scales finished with an incredible 234 yards off of 26 carries with all four touchdowns in the Spartans’ victory.

Wesleyan 38, Salem 19: The host Wolves put on quite the offensive exhibition torching the Seminoles defense on their way to victory. Wesleyan racked up 409 total yards of offense behind quarterback Will Anderson. Anderson threw for 284 yards on 21-of-29 passing and four touchdowns. The Wolves defense struggled in the first half, only leading 21-19 at the half, but shut them out in the second half.

Westminster 15, Laney 12: Georgia Tech commit Harrison Butker booted three field goals and McClain Bradley added a 1-yard touchdown run as visiting Westminster picked up its first win of the season. Butker connected from 49 and 52 yards out in the opening half before nailing the game-winner to break a 12-12 tie with seven minutes remaining.

Class A
Athens Academy 42 Pace Academy 7: Quarterback Austin Schulte had a huge night for the host Spartans and got them on the board with a 30-yard touchdown run. Taylor Allen extended the lead with a 66-yard rushing score and Schulte hit Eric Williams and Bobby Marshburn for touchdowns of 32 yards and 10 yards. Another Schulte rushing touchdown pushed the halftime lead to 42-0.