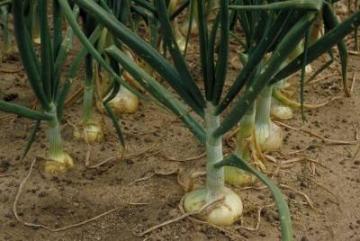 Prison inmates are working on a Vidalia onion farm in southeast Georgia as part of a state program to fill empty farm jobs.

The ‘transitional’ inmates packing onions at the Wayne Durrence Farm in Glennville are getting ready to return to the outside world. A part of their paychecks goes to the state to defray incarceration costs.

Agriculture Commissioner Gary Black says the effort differs from a program last year involving people who are on probation.

The state sent probationers to farms after a new law cracking down on illegal workers left thousands of farm jobs unfilled. Few lasted more than a couple of hours.

Black says transitional inmates have worked on prison farms and in poultry plants for years.

“You get a good, motivated worker and then when they get out of prison, many times they have a full time job waiting on them. It cures several problems at once," he said in a phone interview. "But it’s never been used in production agriculture.”

Owner Wayne Durrence says he has no complaints about the inmates harvesting his Vidalia onions.

“They’ve worked out real good," he said. "Some of them even said when they get out, they may come back and work for me, you know maybe next year. They have really worked out good.”

Durrence says there are fewer migrant workers in Georgia now that the immigration law is in effect. He says he also uses some foreign guest workers through a federal H2A visa program but it's a hassle.

There are about 400 inmates in the transitional work program, Black said, although only about 10 have been working at the onion farm. Short of reforming the federal H2A program, he said there's no silver bullet to solving Georgia's labor shortage.

A federal judge has blocked parts of Georgia's immigration law, pending a ruling expected this month by the U.S. Supreme Court on a similar Arizona law.