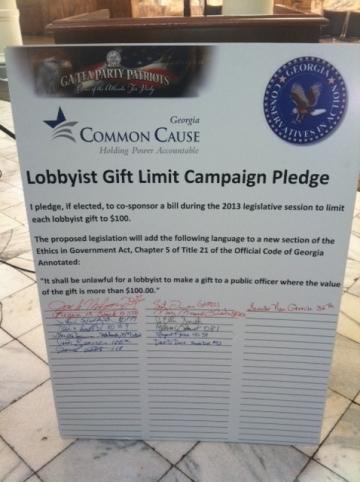 Two of Georgia’s most powerful politicians are pledging to co-sponsor an ethics bill to limit lobbyist gifts to lawmakers to $100.

It’s a change of heart for the Republicans who have been part of the Senate majority against the gift cap.

William Perry, executive director of the ethics watchdog group common cause, says he was not expecting to get a signature from Senate President Pro Tempore Tommie Williams or Senator Don Balfour, who is Chairman of the powerful Rules Committee:

“We are extremely excited and quite surprised actually, but I think it is truly reflective of the changing tide that was kicked off at the Republican convention last weekend.”

But Senator Balfour of Snellville says it was just a matter of time before he got behind ethics reform:

“I think you’re going to see this summer in the Republican primary, an overwhelming number of people voting for it, number one, number two you saw the pro tem voted for
it as well, I think it’s a timing matter and for certain it’ll come up next session and I’m going to help them get it passed.”

The Republican primary ballot will pose a question to voters, asking if they support a 100 dollar cap on lobbyist gifts.