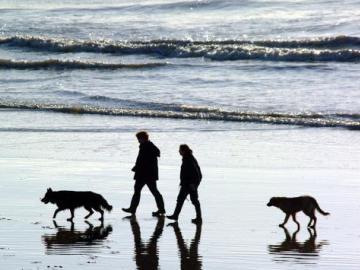 Saturday marks the unofficial beginning of summer and the start of some new rules for dog lovers on Georgia's coast.

The changes will impact dog owners on St. Simons Island.

Glynn County officials are banning dogs on the beach this summer when the surf is most popular -- in the day.

Dog owners still can go beach-walking with their dogs before 9am and after 6pm.

"That's the only time that I can go, so I'm okay with that," Gamble says. "If other people go during the day when they have time, then I suppose it imposes on them."

They're giving dog owners the discretion to unleash their dogs and let them roam free in the mornings and evenings.

Only unruly dogs have to be leashed.

Dog owners can be ticketed if their dogs are not under their voice command.

Area resident Susan Corn Wainright says, her dogs Boo, Mattie and Gracie love to chase tennis balls -- something they can't do on a leash.

"When we go out on the beach, they don't even notice anybody, any other dog or whatever," Wainright says. "They're focused on this game that they're playing. It really is the owner's responsibility. If they have a dog that's iffy, then you put your dog on a leash."

The changes go into effect Saturday and apply through Labor Day.

County officials say, they made the change to simplify the rules and protect public health and safety.

Cumberland Island National Seashore allows dogs but you can't take them on the ferry.

Car-accessible Sea Island isn't included in the Glynn County ban, but it's a private, gated community.