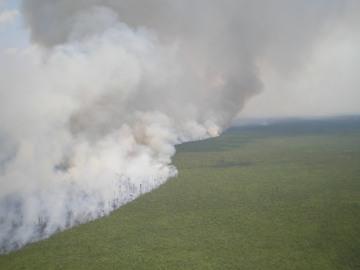 The US Forest Service is relying more on the military's might to help prepare for this year's wildfire season.

The agency is contracting with the Air National Guard and other military units in a move that could help Georgians.

The forest service moves fire-fighting planes into place for every fire season.

They just moved one recently to the Oceola National Forest to use against North Florida and South Georgia wildfires.

This year's fire season started early and forecasters are predicting an active one with global weather patterns shifting.

"Air tankers are a valuable resource for wild land fires," Sorrells says. "Not only for use on federal property. But we as a state can request use of those as needed."

State officials Tuesday for the seventh year in a row banned outdoor burning in 54-Georgia counties through September.

"Those are valuable," Sorrells says. "By increasing their capacity in air tanker resources, it's certainly going to be a benefit as we move further into our fire season."

Just two weeks ago officials said a huge wildfire that burned more than four-hundred square miles of the Okefenokee Swamp was out.