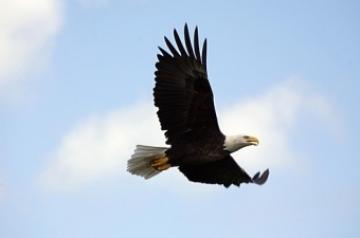 Jim Ozier of the Georgia Department of Natural Resources said eagles are commonly reported on Lanier, but there have been no documented nests.

Ozier found a female bald eagle on the nest with either eggs or eaglets in an area being developed for Don Carter State Park on the lake's north side.

About 33 percent of the bald eagle nests in Georgia are in coastal counties, and a large portion of documented nests are south of Atlanta.

There have been some nests documented north of Atlanta, including Lake Allatoona and on the Berry College campus in Rome.