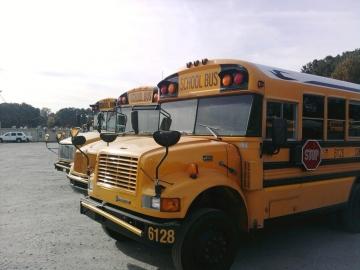 Local school districts across Georgia are dealing with less money from the state for transportation while being hit with higher gas prices and dwindling local budgets.

School districts are finding cost-efficient solutions, like increasing the number of students per bus ride.
Thousands of bus stops have been eliminated across the state and remaining stops are farther apart. That means more kids are walking earlier in the morning in limited light, and making their way across busier roads to get to bus stops.

Garry Puetz, transportation director for Forsyth County Schools, says their local transportation budget has shrunk by more than half since 2002. Instead of cutting service, they’re putting more students on each bus:

“We’re carrying on average, 45 students per bus, per bus route, our routes are longer, we have some routes at an hour long, which is rather unusual, those are getting longer every year.”

In Forsyth County, for example, one of the state’s wealthiest districts, school transportation costs were about 12 million dollars this fiscal year. The state contributed 1.4 million to cover the expense—about 11 ½ percent.