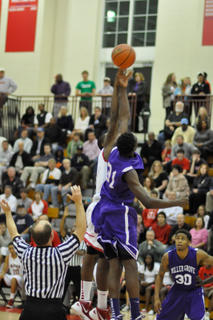 The first round of the Georgia high school basketball playoffs is halfway done after a rousing night of action on Friday.

The highlight of the night may have been Class A No. 1 Calvary Day losing to Greenville 66-64 in a thriller in Savannah. Check our recaps below for more exciting Friday night playoff action.

Miller Grove 83, New Manchester 35: The host Wolverines defeated New Manchester behind their senior leaders on the inside. Power forward/center Tony Parker had 21 points and 12 rebounds, while forward Tony Evans added 17 points and eight rebounds and forward/center Brandon Morris put up 15 points and nine rebounds in the victory. Miller Grove advances to the second round as the Wolverines attempt to win their fourth consecutive Class AAAA state championship.

North Forsyth 54, Wheeler 44: The Lady Raiders trailed 23-15 at the half but outscored visiting Wheeler 16-4 in the third quarter to take control. Avery Scarbrough led North Forsyth with 15 points, 10 of which came in the third.

Mill Creek 65, Brookwood 55: The visiting Lady Hawks grabbed control of the game early and led 33-22 at the half. Jasmin Carter led Mill Creek’s effort with 22 points. Tamarra Williams added 14 points for Mill Creek including four from behind the three-point arc.

Harrison 43, Beach 25: The visiting Lady Hoyas advanced to the second round of the state playoffs for the first time in school history thanks to a strong night from Alabama signee Nikki Hegstetter. The post player scored 22 points and tallied 14 rebounds.

Parkview 53, Duluth 41: In a battle of Gwinnett rivals, the Lady Panthers needed a six-point run in the game’s final four minutes to put visiting Duluth away after trailing 34-32 entering the final period. West Carolina-signee Erika Joseph led Parkview with 16 points.

Westlake 67, Colquitt County 63: In a double overtime contest, the host Lady Lions needed all of guard Aisha Turner’s 19 points for the win. With under a minute in the first overtime period, Turner drained a three-pointer and a free throw to rally Westlake.

Alcovy 78, Forest Park 65: The visiting Panthers took a four-point halftime lead, but Alcovy stormed back in the second half with a 26-8 run to key the win. Michael Tucker led the Tigers with 28 points. Deondre Butler added 16 points for Alcovy.

Jonesboro 52, Griffin 40: The host Cardinals jumped out to a 24-20 halftime lead and never trailed in the second half. Center Chukedubem Okeke led the way for Jonesboro with 13 points, 10 rebounds and eight blocks.

Creekview 74, Clarke Central 42: The host Lady Grizzlies used a 26-2 run to run away from Clarke Central in the second quarter. Creekview had four players score in double figures, led by Dee Blankenship’s 15 points.

Jonesboro 58, Woodland-Henry 39: The host Cardinals dominated on both ends of the floor with Ashley Hand leading the team with 17 points and Kim Dawkins piling up seven blocks. Dawkins also scored six points with 16 rebounds to lead Jonesboro.

Osborne 64, Redan 54: After playing a close game for three quarters, Osborne pulled away in the fourth. Point guard Ebonee Allen had 25 points for hosting Osborne and also went 100 percent from the free-throw line. Small forward Damia Andrews had 18 points for Osborne.

Lovett 56, Carver-Columbus 34: The Lady Lions dominated the fourth quarter, outscoring visiting Carver-Columbus 22-10 in the period. Tatianna Jackson scored a game-high 31 points, including 13 in the fourth. Lovett was 13-for-14 from the charity stripe.