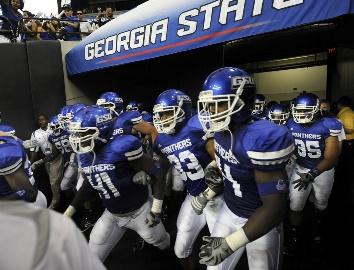 Georgia State is studying a possible move to the NCAA Division I Football Bowl Subdivision, just two seasons after launching its program.

The Panthers currently compete in the Football Championship Subdivision as a member of the Colonial Athletic Association.

Athletic director Cheryl Levick says the school is "performing our due diligence to fully understand potential opportunities in the rapidly changing landscape of college athletics and particularly college football." She says the school hasn't received an invitation from any conference and no decision has been made on moving up.

The Atlanta Journal-Constitution reported that the $20,000 study by Atlanta-based Collegiate Consulting found Georgia State "well-positioned to make a transition to FBS." The report says the Sun Belt Conference would be the best fit.