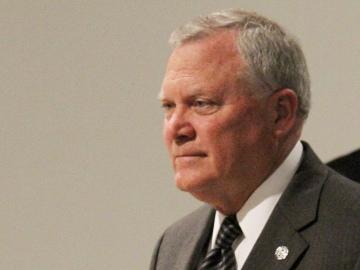 An outgoing member of Georgia's Department of Natural Resources Board says, Governor Nathan Deal is forcing him out for not rubber-stamping a pro-development agenda.

Budd was in line to become DNR chairman when Deal informed him, he instead wouldn't be re-appointed for another term.

Budd describes himself as some environmentalists do -- a hunting and fishing "conservation conservative" who questioned some policies.

"I think the Governor is not interested in having people on that board with a strong conservation ethic," Budd says. "I was told by people on the inside that the reason I was not re-appointed was my opposition to building reservoirs north of Macon. If you're not going to have a board members speak out and try to be activist in managing our natural resources in Georgia, you might as well not have a board."

Deal has proposed a $300 million reservoir program to quench North Georgia's water needs, an idea that's opposed by many environmentalists because it could pinch the state's rivers and downstream marshes for Metro Atlanta development.

"It's very frustrating," Wedincamp says. "Every time we get someone on the board who cares about their job of protecting the environment, they're not reappointed."

A Deal spokesman couldn't be reached, but one told the Atlanta Journal-Constitution that the Governor's appointments allow for new blood, new ideas and "team players" ready to carry out Deal's agenda.

"If anyone on any board considers himself indispensable, this is what educators call a 'teachable moment,'" spokesman Brian Robinson told the AJC in an article published online Wednesday. "It takes an eyebrow-raising amount of self-regard for someone to suggest publicly that, out of 10 million Georgians, only he or she brings a diverse viewpoint to a board."

Former Governor Sonny Perdue, a Republican, appointed Budd to the DNR board in 2005.