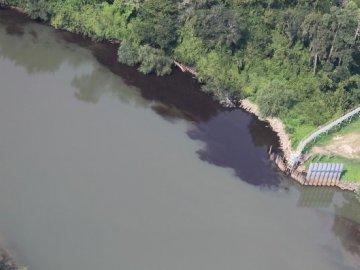 The Georgia Water Coalition is highlighting a dozen threatened rivers.

A coalition spokeswoman says, a massive fish kill on the Ogeechee in May cinched the river's place at the top.

The nearby Altamaha River is number two.

The Altamaha Riverkeeper's Deborah Sheppard says, that's because of noxious waste from a Rayonier paper mill in Jesup.

"The smell will gag you," Sheppard says. "Any person with a lick of sense would have to say, 'Is this really okay?'"

Sheppard says, the river's color is almost clear just above the mill, but turns unnaturally dark just below it.

"People are concerned about water quality," Thomas says. "We are as well."

Thomas says, the river's color has improved 30% since the company entered into a consent agreement with the state Environmental Protection Division three years ago.

That order gives the company seven years to improve emissions.

"We have planned another $40 million in investments to deal with this issue," Thomas says. "It's a process that's underway and we've made good progress on it."

The Savannah River is on the list because of Savannah's harbor deepening.

The Chattahoochee is on it because of low flow near Atlanta.

The state list is a first of its kind, although a similar national list, from the group American Rivers, has cited Georgia waterways before.