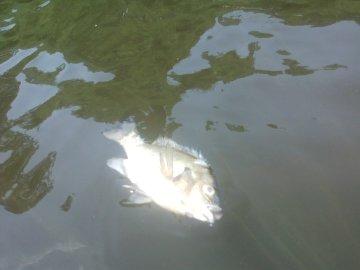 The Ogeechee Riverkeeper says, more fish are dying in the East Georgia waterway, months after a massive fish die-off in May.

State officials are not answering questions about the river's safety.

Officials with the state Environmental Protection Division and those of textile maker King America Finishing in Screven County say, they have no comment about new reports of fish dying in the Ogeechee River.

Tens of thousands of fish turned up dead this spring.

The new die-off this past weekend was less intense.

"The state really has to step up and do something," Wedincamp says. "It is really an emergency situation and the public has to be protected."

"We're hearing reports of more dead fish showing up," Wedincamp says. "We want people to be careful, to stay out of the water and not to eat the fish."

The source of the fish kill has been traced to the textile mill discharge pipe.

Reached by phone at his office, Mike Beasley, CEO of King America Finishing, said he had "no comment at this time."

State environmental regulators also have refused to answer reporters' questions about the river for months.

Wedincamp has filed an intent to sue the mill and EPD.

A group of area land owners also have sued.