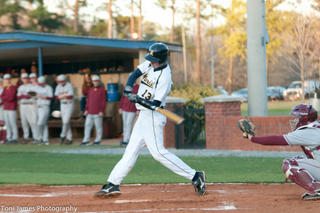 In a Class AAA championship series, Columbus and Spalding split a doubleheader with each team taking mercy-rule wins. The Jaguars won Game 1 18-1 in six innings, while Columbus avoided elimination by winning the second 12-2 in five innings.
Each team seemed to feed off early success.
“Momentum is the most important thing in a series like this,” said Spalding coach Mickey Moody. “It snowballs and is contagious with hitters. It’s huge.’
The deciding game of the series will be played here tomorrow at 4:30 p.m. with the Blue Devils being the designated home team.
In the series opener, Spalding scored seven runs in the fifth and nine in the sixth to extend a 2-0 lead to 18-0. Columbus scored one run in the bottom of the sixth to avert a shutout, but could not come within the required 10 to extend the game.
Pitcher Casey Moody pitched a complete game two-hitter and also homered for the Jaguars.
“It’s crazy,” said Moody about playing for a championship. “I’ve been dreaming about this since my freshman year in high school. It’s unbelievable.”
Little League World Series hero Kyle Carter started for Columbus, but was lifted after giving up eight runs in 4 1/3 innings.
Game 2 was a different story as the Blue Devils, who were technically the visitors for this game, scored six runs in the third inning, three in the fourth and three in the fifth. With the mercy rule looming, Spalding, trailing 12-1 at the time, pushed across one run in the bottom of the fifth, but could not extend the game.
“We’re just glad to be in Game 3,” said Columbus coach Bobby Howard. “They were playing with house money after Game 1. Now, it comes down to one game.”
Columbus pitcher Will Solomon threw a complete game, while Carter hit a three-run homer. Solomon looked cool as a cucumber in the stifling heat, despite his team facing elimination.
“I got some experience in my sophomore and junior years pitching (in championship series),” said Solomon. “We know what it’s like to play in a series like this.”