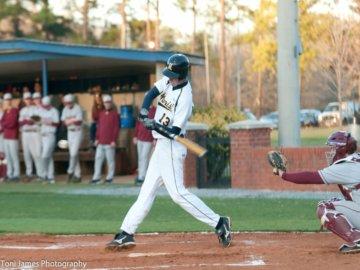 Tuesday, across four sites in the state of Georgia, semifinal rubber games were played to determine participants in four of the five state championship series. Three teams that lost the first game of their respective series advanced by winning last two games of their three-game series.

“In the second round against North Gwinnett, we had to get in that Game 3 ‘win or go home’ mindset,” said Parkview head coach Chan Brown. “That’s kind of been our rallying cry.”

And rally is what the Panthers did starting in the fifth inning of Game 2 Monday night. From that point, Parkview outscored the Packers 15-2 over the final 10 innings of the series.

“The momentum turned in the fifth inning (of Game 2),” said Brown. “We put up a seven-spot and that turned it around.”

Parkview wasted no time in taking control of the deciding game. After falling behind in the first two games of the series, Brown’s Panthers raced to a 6-0 lead in the top of the first and, in the process, knocked Colquitt County starter Austin Dykes out of the game. In that inning, Matt Olson hit a three-run homer and Rob Youngblood connected on a two-run shot.

Jessie Foster relieved Mac Marshall in the first inning of Tuesday’s game and threw six innings of scoreless relief to earn the decision. Foster came in with no outs and the bases loaded and got out of the jam with his team still leading 6-2. The senior gave up just one hit and struck out seven.

The finals appearance will be the first for Parkview since 2002 after making the semifinals for the first time since 2005.

Parkview will host Hillgrove Saturday in the state finals series. If necessary, a Game 3 will be scheduled on Monday to break a tie.

Pike County baseball had never made the state semifinals before this season. Now, the Pirates can say they’ve been to the championship series after defeating Lovett 6-1 in the rubber game of a Class AA semifinal series.

Pike County will travel to Buford for the state championship series on Saturday. Game 3 would be played Monday, if necessarily.

The host Pirates used a complete game three-hitter from pitcher Lance Shelton to stymie the Lions’ bats. Shelton struck out six, while giving up no walks.

“Lance was lights out,” said Don Hanson. “I’m glad we decided to put the ball in his hands. He was masterful.”

The Lions were undone by poor defense and weak offense in Games 1 and 3, both losses.

In the fifth and sixth innings the Lions gave up a total of five runs, but only one of them was earned. And, of the six runs scored by Pike County, only two were earned.

The fifth inning was crucial for the Pirates, as they broke a 1-1 tie with two runs. Chad Kirksey and Brett Butler each scored during an inning in which Lovett pitcher Dylan Malinowski was struck twice by Pirate hits.

Lovett tied the game at one in the third when Robbie Blair used a fielder’s choice to drive in Clayton Lau, who had doubled and advanced to third.

In a Class AAAA semifinal series, Marist won the rubber game 13-6 to advance to the state championship series. The host War Eagles dropped the first game of the series before rebounding to win the final two.

Marist will host Whitewater in the state championship series this Saturday. If the teams split the first two games, a rubber game will be played Monday.

The War Eagles took the lead for good in the fourth inning when they broke open a 6-6 game by scoring three runs. In the fifth, Daniel Spingola and Mitchell Anderson each had RBIs to extend the lead to a commanding score of 11-6.

Despite the lopsided score, Loganville challenged Marist throughout much of the affair. After the hosts took a 2-0 in the first inning, the Red Devils battled back to take a 3-2 lead in the bottom of the second thanks in part to a two-run homer by Cody McCance.

Then, after Marist scored four in the top of the third, McCance drove in three runs with a single after two Marist throwing errors allowed him and two others to score. The error-aided inside-the-park homer tied the game at six.

But Marist’s offense was too much, as the War Eagles totaled 17 hits. Cole Truxillo earned the win after relieving Spingola, who started the game, in the second inning.

The War Eagles return to the finals for the second year in a row and for the sixth time since 2000. Marist has won 11 state titles in 18 previous appearances in the championship series.