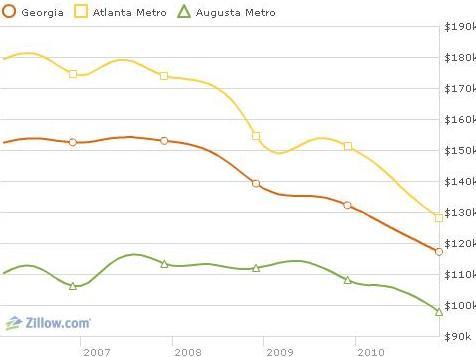 More than half of Atlanta homeowners owe more on their mortgages than their home is worth, according to new data from real estate Web site Zillow.com.

The rest of Georgia seems to be faring better, however, in Zillow’s fourth-quarter Real Estate Market Report. The site also tracks home values in metro Augusta, where 22 percent of homeowners are underwater.

“Augusta is a relatively major city for Georgia compared to many of the rural areas, so I suspect in some rural areas it’s even less than [22 percent]. But it’s still gonna be negative,” said James Kau, a real estate professor at the University of Georgia Terry College of Business.

“We’ve experienced a big price decline in residential property and in commercial property, so you’re going to experience [negative equity] everywhere in the state,” he said.

Kau said trends in Atlanta likely have some influence on other parts of the state, but he noted prices elsewhere did not climb as high during the boom, so they do not have as far to fall.

Prices still will fall, though.

“We’ve been experiencing growing negative equity since the latter part of 2006 and the prices have been going down since that point,” Kau said. “Then they leveled off for a while and people were hoping that we’d reached the bottom. But it doesn’t seem to be the case.”