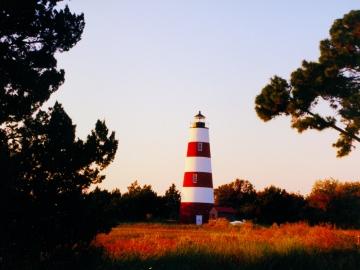 A team of volunteer and professional archaeologists have discovered the site of the original lightkeeper's house on Georgia's Sapelo Island.

The structure housed generations of lightkeepers and their families starting in 1820 until its collapse in a hurricane in 1898.

Since the collapse of the ruins, probably in the early 1900s, its location had been lost.

Twelve volunteers shoveled, screened, and trowelled through sand under the guidance of archaeologists from the University of Tennessee at Chattanooga, West Florida University and the Georgia Department of Natural Resources.

Several inches into the sand, they discovered the foundations of the house, as well as a scatter of artifacts including glass from the lighthouse windows, which were blown out by the storm.

Built in 1820, the lighthouse was in service until 1905 when it was deactivated.

Following its 1998 restoration, it once again became a working aid to navigation.

State archaeologist and Historic Preservation Division Director Dr. Dave Crass said, "This is a great example of how volunteer archaeologists working hand-in-hand with professionals can contribute to the preservation of Georgia's unique heritage."

The volunteers were on the island participating in the "Sapelo Island Archaeology" field trip from Weekend for Wildlife.

Now in its 23rd year, the Weekend for Wildlife is a science excursion led by DNR field scientists.

Sapelo Island, situated about sixty miles south of Savannah, lies in the center of coastal Georgia's chain of barrier islands.

The 16,500-acre island is Georgia's fourth largest and, excluding the historic 434-acre African American community of Hog Hammock, is entirely state owned and managed by the Georgia Department of Natural Resources.