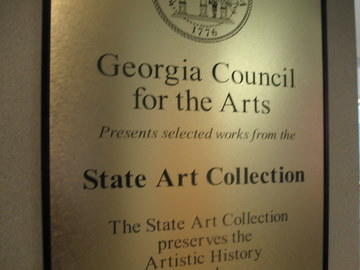 Backers of the arts in Georgia pushed their case for $1 million in funding at the state Capitol this week. Arts advocates want to make sure a restructuring of Georgia’s Council for the Arts doesn’t leave federal money on the table.

Last year House lawmakers proposed to eliminate money for the Council for the Arts, and replace it with a new agency. But funding was restored—the Council survived—and matching federal arts funding preserved.

Brenda Durant is president of the state’s arts advocacy group, Georgia Assembly of Community Arts Agencies. She says job one this week was to ensure enough money stays in place to keep a full matching federal arts grant.

“The National Endowment for the Arts—the NEA—has a matching grant program of up to $900,000. And in order to do that there are some qualifications or structure that has to be in place.”

Governor Nathan Deal has proposed rolling the Council for the Arts into the Department of Economic Development, with a smaller budget of about $567,000. That would be more than a 35 percent cut the arts gets in the current fiscal budget. Only two years ago, Georgia arts got $2.5 million.

To qualify for the NEA grant, Durant says the Arts Council needs to be a division of the Department of Economic Development—with a director—to keep the federal money flowing.

Durant says arts advocates had another mission this week at the Capitol -- a general education of lawmakers that arts funding equates to big economic return.

“I think that a lot of lawmakers think of arts organizations or investing in the arts as charitable giving. And I think that’s the mindset that’s the hardest to change.”

Durant cites a study conducted last year on the economic impact of the arts in Georgia. Of 70 counties that participated in the survey, it shows a total impact to the state of $385 million.

The analysis was done by the Metro Atlanta Arts and Culture Coalition in conjunction with a Georgia State economist.