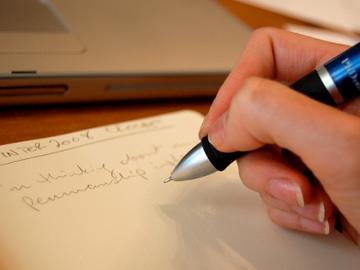 Georgia schools could drop cursive handwriting from the curriculum.

Students are currently required to learn cursive beginning in the third grade.

But the flowing style of handwriting isn't mentioned in a new state curriculum the state adopted last summer.

"We're really looking at understandings for students in the 21st Century," Koballa says. "So, I think the question really is, 'Is cursive writing one of those critical skills?'"

Koballa is one of those who has his doubts.

"I think even with the SAT and GRE, many of those are now being done online where students are using a keyboard," Koballa says. "So, I think we're moving in that direction where that might not be such a critical skill."

Its proponents however, say, cursive is necessary to communicate, especially on hand-written lessons and exams.

Understanding what others have committed to paper also is important to comprehending hand-written notes and instructions.

A panel of teachers and administrators will meet in February to decide whether to amend the standards to include cursive.

But their decision might not mean that students will go lacking in learning all those swirly letters.

So, if cursive is dropped from the curriculum, it still could be taught, just as part of other lessons.