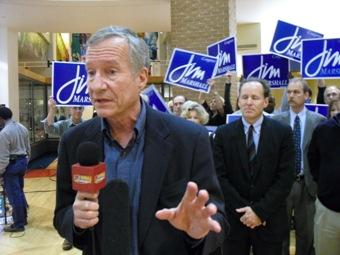 8th District Congressman Jim Marshall has lost his bid for reelection. He will not serve a fifth term in office. Republican Austin Scott won with 53-percent of the vote.

A crowd of supporters cheered Marshall in Macon after he conceded the race to Republican Austin Scott. In the last month Marshall slipped in the polls unable to swim against what he called a "Republican tsunami".

Scott criticized Marshall for his votes on the stimulus package and TARP. Marshall says despite his loss he would not have voted differently.

“TARP was absolutely something that we had to do for the sake of the country, for the sake of all those folks whose jobs, whose dreams, whose savings were on the line. I, you know obviously am not going to change a vote just to stay in Congress. I’m just not going to do that.”

Marshall says he received a call from President Obama expressing his condolences. Marshall says he then called Scott to congratulate him and offer his help with the transition.