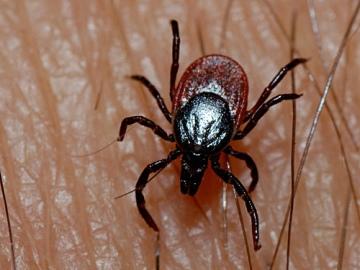 Ticks are as much a part of summer as the great outdoors and a walk in the woods.

They suck blood and spread disease.

But a Georgia researcher says, there's more to ticks than their bite.

She's working with other scientists on a $2 million project to figure out a tick mystery.

"I think they are fantastic animals and I like to study them just for themselves," Beati says.

A parasitologist who's studied ticks for 25 years, the Swiss-born researcher works at the world's largest curated tick collection.

It's at Georgia Southern University, where about 800 of the world's 900 known tick species lie preserved in clear, pencil thin vials.

"I recently received ticks analyzed in 1844," Beati says. "Some of them are absolutely beautiful."

But aren't we talking about a tick? Isn't it transmitting disease? Isn't it almost like a roach, beautiful to step on?

"Well, it's funny," Beati says. "A few years ago, I would not have known exactly how to answer that....I don't subdivide nature into useful and non-useful animals. For me, everything has to be there."

Beati probably won't get much sympathy from those suffering from Lyme Disease, a pesky fever that can lead to serious joint and heart issues.

Most ticks spread disease by lying in bushes, waiting for you to brush up against them.

But not one exotic type of tick that she pulls out. It's a menace of the Sahara.

"They hide in crevices in little holes under the palm trees, you know, you can imagine, under rocks, waiting until they feel the camels step in there, they run out from their hiding place and start feeding," Beati says.

There are so many types of ticks and each spreads disease a little differently, so when researchers discovered that ticks in the southern U.S. rarely transmit Lyme Disease, but ticks up north do all the time, they had a genuine mystery on their hands.

"There are lots of hypothoses," Beati says. "Maybe a genetic group is more likely to feed on lizards and the other one on rodents. Or is the tick's genetic background determining which strains of pathogens they can accept?"

Beati and her students are working with teams from six other colleges in the U.S. and Canada to solve the mystery.

"If we manage to figure out why in the south ticks do not carry the pathogens that often, we may be able also to develop prevention strategies that then can be applied to the north," Beati says.

And that could lead to Lyme Disease vaccines.

Already vaccines have been developed based on the parasite's amazing survival skills.

You see, ticks have a molecule in their saliva that prevents you from feeling their bite.

It's just one more ticks-are-cool fact from Beati, who nonetheless has this advice for when you find one on your body.

"Grasp well with your fingers," Beati says. "If you have fine tweezers, you grab them with the tweezer and then you pull it out in one move."

Beati stresses that even though tick-borne Lyme Disease is rare here, ticks can and do give Southerners other very serious diseases, like a potentially deadly fever.