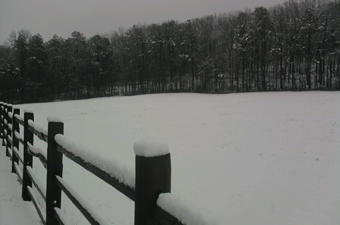 Another wintry mix of precipitation is moving through parts of Georgia today.

Forecasters have revised a winter storm warning to cover an area north of a line from Carrollton to Atlanta to Athens. The warning extends until midnight. Projections are for accumulations of between 2-5 inches for the Georgia mountains.

Hundreds of flights in and out of Atlanta's Hartsfield-Jackson International Airport have been cancelled in response to the weather.

Concerning Georgia roadways, state Department of Transportation crews are monitoring any trouble areas. A spokesman says in northwest Georgia, scattered icy patches have been reported along a stretch of I-75 north and southbound in Catoosa, Whitfield and Gordon counties.

More than 75 GDOT workers with 35 trucks equipped with snow plows and hopper spreaders continue their work to keep the interstates and state routes open and safe for the traveling public.

GDOT urges motorists to slow down and be aware of black ice, especially on bridges and overpasses.
.