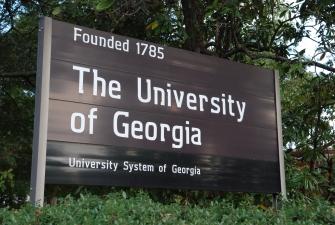 Georgia's public universities and colleges say they'll have to cut more than 4000 jobs, eliminate degree programs and dramatically cap student enrollment if they have to make $300 million in cuts next fiscal year. The cuts would mean unprecedented layoffs of tenured professors, says Regents Chancellor Errol Davis, and require the University System of Georgia's Board of Regents to, in effect, declare bankruptcy.

The proposed budget reductions come after the joint House and Senate appropriations committee asked Chancellor Erroll Davis to try and cut $300 million, on top of $265 million in cuts already proposed by Governor Sonny Perdue. Lawmakers are trying to plug a $1 billion shortfall in the state budget without raising taxes. The cuts outlined today represent only the additional $300 million requested by legislators.

"We strongly believe that cuts of this nature, if implemented, would severely compromise our ability to provide the educated populace that is necessary for the continued success of this state," Davis wrote in a letter to Senator Seth Harp and Representative Earl Ehrhart, chairmen of the joint legislative committee.

Here are some highlights:

*Medical College of Georgia: Cuts would mean 155 fewer students at a time that Georgia is trying to train more people and keep them in the state in the midst of a shortage of doctors. Other proposed actions -- Reduce graduate medical education and cancer initiative by $5 million each, eliminate nursing program at Athens campus, eliminate five undergraduate degree programs in allied health fields. Layoffs and positions eliminated would total 63.