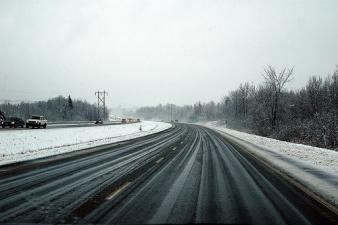 Most of the state saw snow yesterday, reaching as far east as Savannah.

It left in its path ice and snow on the roads which has transportation officials imploring people to avoid road travel.

"Now more than ever, it is critical that people stay off the roadways, if it is not an emergency,” said DOT Commissioner Vance C. Smith, Jr. “We are treating roads and they are refreezing due to the low temperatures in many areas. Especially in the metro area, we are seeing many icy spots on the roadways.”

DOT officials say that every county in the state was affected by the winter storm. Most areas have road closures.

Crews have been treating roads since yesterday. Officials advise motorists to stay 10 car lengths away from spreaders and dumptrucks treating roads with ice and gravel.

They anticipate the sun will melt the ice and snow, as temperatures today should get above freezing by noon; but since no wind is forecasted to blow the water off the roads, they're concerned about refreezing once temperatures drop again this evening.

And forecasters say there could be more snow to come tomorrow night and flurries are likely Monday.

Below is a listing of road closures and areas that have icy conditions where motorists are encouraged to use extreme caution if they must travel in these areas.

Roadways in the following counties are icy and may close at anytime:

Roadways in the following counties are icy and may close at anytime:

The following roadways are closed:

The following roadways are passable but are icy and may close for treatment at anytime:

The following roads have been reported closed:

Georgia DOT crews are currently working to clear the roadways, bridges and overpasses on the following routes where snow and or icing have occurred:

Coweta County – icy patches on interstate, bridges and ramps of I-85

There are no road closures in Southwest area. Georgia DOT crews are salting bridges and overpasses as a precautionary measure at this time.

All roads in Southeast Georgia are open and passable; however icy conditions exist and roadways may be closed when necessary.

The public is encouraged to refrain from driving if possible. Please contact the Georgia DOT for the latest information on road conditions via http://www:georgia-navigator.com or by dialing 511; and utilize extreme caution if driving is necessary.