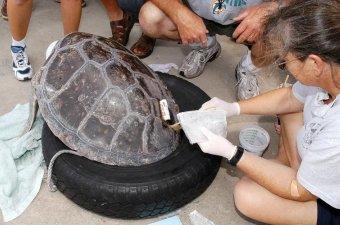 Cold weather has prompted a spike in the turtle population at the Georgia Sea Turtle Center.

The Jekyll Island-based center acts as a kind of hospital for sea turtles up and down the Atlantic coast.

Fourteen endangered Florida and North Carolina sea turtles were rushed to the center after suffering a kind of hypothermic shock in rapidly cooling coastal waters, says the center's Jim Squires.

"They become extremely lethargic," Squires says. "Their immune system is compromised. Basically, a sea turtle cannot tolerate a body temperature much below 50-degrees."

The cold-shocked turtles have pushed the center beyond its capacity.

"We have turtles in kiddie pools on the floor throughout the center," Squires says. "We're doing the best we can."

Their recovery could take months.

No Georgia sea turtles have been injured by the cold so far.

Other cold blooded animals are suffering in the extreme cold, including Florida iguanas.

According to reports, many iguanas have become so lethargic they're falling out of trees in that state.