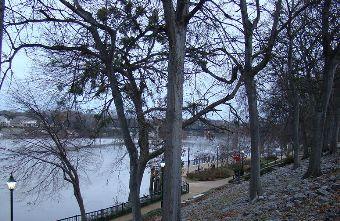 Governor Sonny Perdue says regions outside of metro Atlanta, such as Augusta, shouldn't be territorial with water -- and that includes the Savannah River.

Interbasin transfers -- millions of gallons of water drawn from one river basin and transported to another -- may have to be an option, Perdue told community leaders at a luncheon in Augusta on Friday.

Perdue's comments come as state officials seek sources for drinking water other than Lake Lanier in north Georgia, which is metro Atlanta's main water supply. A federal court ruling this year could drastically reduce the amount of water Atlanta can take from the lake. It's the latest development in a decade-old lawsuit, in which Alabama and Florida argue Atlanta's withdrawals from Lanier harm downstream communities.

"Obviously I make people nervous there because we've got this culture of this inviolate theory of no interbasin transfers," he said. "I just want us to look at it from a Georgia perspective -- all Georgians. Some out there want to talk about Atlanta's problems. As I said, do they affect us all over Georgia? Absolutely they do."

But interbasin transfers are not just an inviolate theory; they are prohibited by state law. Lawmakers, though, can change that law.

"We can't look at them (natural resources) in a selfish possessive way just like we don't try to make one area sacrifice at the expense of others" when it comes to government agencies and operations like social services, said Perdue. "Some have more than they need and others have less than they need. If we have more than we need somewhere, we may have to look at doing (the transfers). I don't think any of us -- no Georgian -- can sit back and think of an issue as fundamental as drinking water for Georgia families as someone else's problem."

But environmental groups take issue with the governor's suggestion that fears over interbasin transfers are selfish. They worry that interbasin transfers could harm water quality along the Savannah River, which runs through Augusta. The area is industrial, meaning higher concentrations of chemical pollutants are discharged into the water. Higher water levels dilute pollutants. In addition, South Carolina already makes transfers from the Savannah to help supply drinking water to its residents.

Opponents also argue that growth in Atlanta should be controlled, with efforts to spread industry and population throughout the state.

The governor's comments come just days after a water contingency task force -- appointed by Perdue -- did not include the interbasin transfers in their recommendations for how to deal with the potential water shortage, calling them expensive and impractical. Instead, the group recommended conservation and the building of more reservoirs.

Perdue said he had no specific proposals regarding the Savannah River, just that the state eventually may have to strongly consider the possibility.