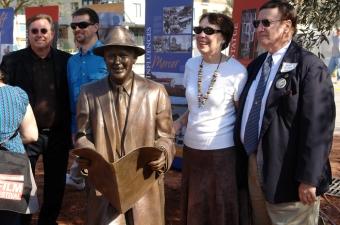 The year-long celebration of Johnny Mercer's centennial culminated today with the unveiling of a statue honoring the Savannah-born songwriter.

Mercer wrote some of the most popular standards in the American songbook, including "Blues in the Night", "Skylark," "Moon River" and "One for My Baby."

Johnny Mercer is to Savannah what James Brown is to Augusta and what Little Richard and the Allman Brothers are to Macon.

He is one of the biggest names to come out of the city. Everybody knows a Mercer song. Revered is one way to describe him here.

People are recognizing Mercer around the world: Radio stations, theater groups, musicians. There are lots of events today.

Here in Savannah, the city unveiled a statue.

It's a smiling, hat-wearing, newspaper-reading, likeness of the songwriter, right down to the gap in his teeth.

Susie Chisholm, the sculptor, talked about the statue's location as being perfectly suited for Mercer.

It's on Ellis Square, which is the heart of nightlife and music in downtown Savannah.

"There are a lot of nightclubs and plus a lot of the restaurants have outside music going on," Chisholm says. "I think they're planning on having an area in Ellis Square where they will be able to have music in the square."

Planning is the important word there.

The construction that has been going on on the square to make it ready for the public isn't entirely done, so we don't have exactly a photo-perfect site for Mercer's statue yet.

It'll be a little messy until the end of the year when officials say construction on the square will be completely finished.

For Mercer's relatives, this is just the culmination of what has been an exceptionally busy year.

Savannah's actually had events all year and just about every local cultural institution that could tie in to Mercer did.

There were scores of events to attend and usually, the face of the family at those events was Mercer's niece, Nancy Gerard, who's been all over, with interviews.

Her main message during this time has been to personalize Mercer.

Here is one of her typical stories:

Listen, he sent me to private schools. I had the gap between my two front teeth but he put braces on my teeth when I was a child.

He sent me to college and I wanted to pay him back when I graduated.

And he said, 'Will you do something for me?'

He said, 'When I'm down and out, will you pass the hat for me?

There are lots of stories like that about Johnny Mercer's generosity, and his personality, and frankly, his moods, which are legendary.

Today, there was a little talk about the potential for Mercer tourism, especially since most biographers emphasize how much his being from Savannah and the South influenced what many have called an "outdoor" or "bucolic" style of writing.

But, of course, it's impossible to tell, even after today's attention, how many folks will be coming to Ellis Square for Mercer's statue or to eat at television food celebrity Paula Deen's restaurant, which is right here.

So, the lasting impact is a big question, but not the focus of celebration today.

There actually was a surprise at today's statue unveiling.

Mercer, as some people might know, never actually wrote a song about Savannah.

But organizers recently found a poem Mercer wrote about Savannah.

It was called "You're in Savannah."

Broadway star Michael Feinstein recorded it. And today, that song debuted for the first time anywhere.

It very well might become a signature song for Savannah, and one that was written by two Academy Award winning songwriters.