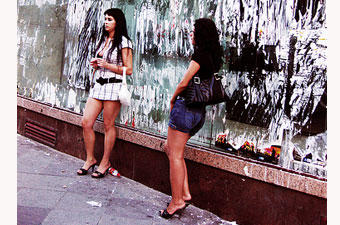 Federal and local law enforcement agents have arrested 35 people in Atlanta as part of a nationwide sting operation combating child prostitution. Among other places, the arrests were conducted at truck stops, casinos and motels.

All of the children rescued were American citizens.

According to Johnson, most of the children are runaways and come from broken homes. Pimps tend to prey on vulnerable children, Johnson says.

“When they see them and have access to them they make their lifestyle look very lucrative and better than what their home life is like. And unfortunately that doesn’t tend to be the case,” Johnson says.

Johnson says his agency has been surprised by the prevalence of child prostitution.

Atlanta, according to the United Nations, has been a center for both international and domestic child sex slavery and prostitution.

Atlanta is also a popular site for business conventions and sporting events. Davis says some of the male attendees “who are alone take advantage of what they see as a victimless crime – prostitution – and because they are away from home they can act with feelings of impunity.”

Davis says that she cannot say definitively whether child prostitution has increased in the last decade in Atlanta, but that “with the Internet creating a marketplace for the buying and selling of kids,” she believes the problem has gotten worse.