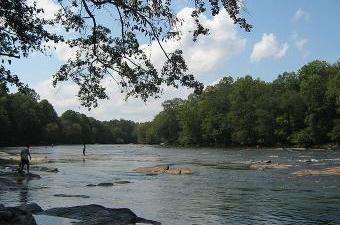 This week Alabama landed a punch against Georgia in the ongoing tri-state water dispute.

It's about a bill passed by Congress that includes a provision requiring the U.S. Army Corps of Engineer to produce a report on how water is used in Lake Lanier.

Congress passed a spending bill that requires the U.S. Army Corps of Engineers to study how water is distributed from Lake Lanier.

The potential problem for Georgia is that the study will not consider drinking water withdrawals. That's because drinking water was not one of the original reasons for creating the reservoir, some sixty years ago.

It's a victory for Alabama because the state's wants more water from Lake Lanier. And it was an Alabama senator who slipped the water in the spending bill.

That's Neil Herring, a lobbyist for the Georgia Sierra Club. Georgia's congressional delegation believes this rule will make it harder for Georgia to amend those old, 1957 rules----and to allow Lake Lanier be used as a drinking water source for metro Atlanta.