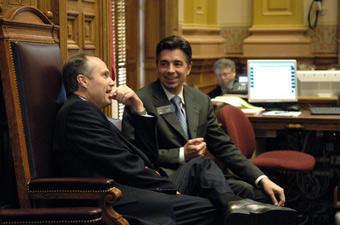 Health insurance reform will take the center stage at the state capitol today, just as the summer recess winds down for members of the U.S. Congress.

Both sides will be making their cases today in Atlanta.

This morning Georgia Republicans will hold a press conference inside the capitol. They oppose the bill that's currently before Congress.

And at noon, more than a thousand supporters of President Barack Obama's health care agenda are set to rally outside the Gold Dome. That's according to the event's sponsor, a group working with the Democratic National Committee.

They're called Organizing for America and they're holding events all over the country.

As U.S. lawmakers head back to Washington, both sides are trying to drum up as much support as they can.