Making Black America: Through the Grapevine 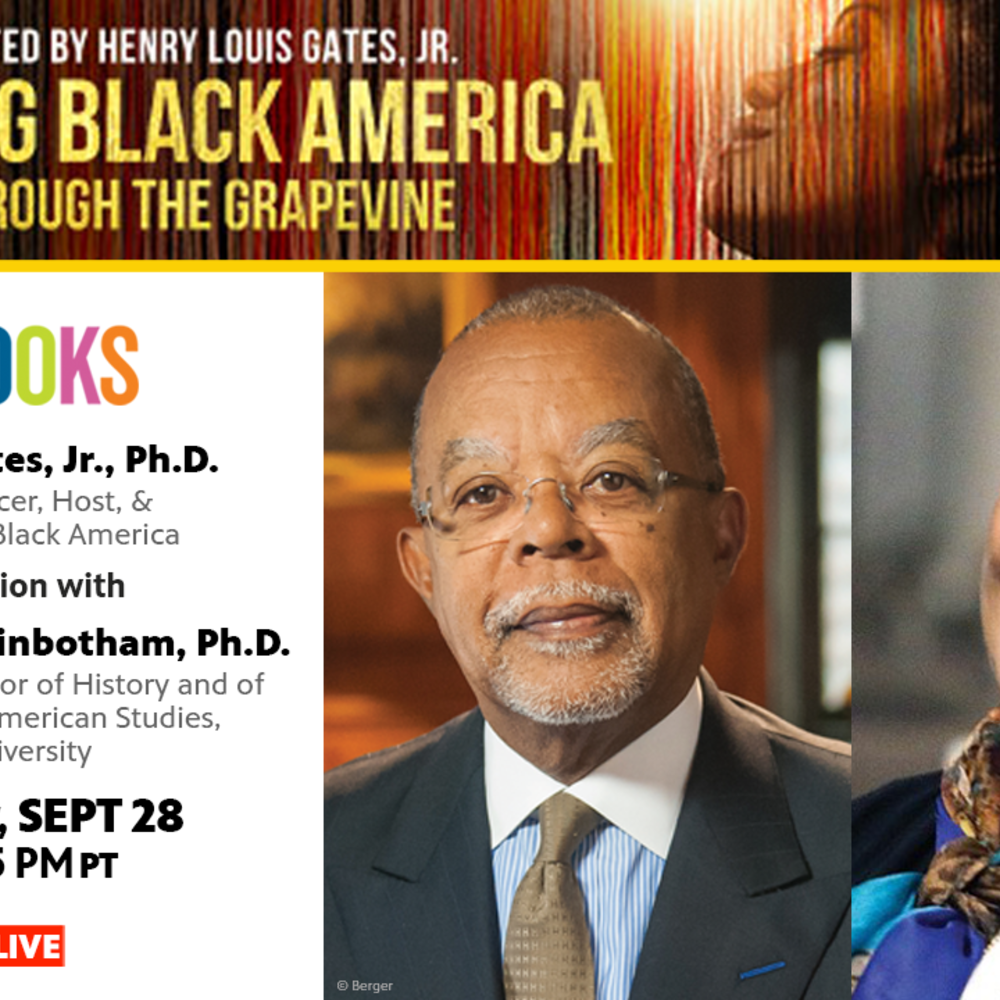 PBS Books, in collaboration with the Association for the Study of African American Life and History (ASALH), is pleased to host a conversation with internationally renowned scholar Henry Louis Gates, Jr., Ph.D.

PBS Books, in collaboration with the Association for the Study of African American Life and History (ASALH), is pleased to host a conversation with internationally renowned scholar Henry Louis Gates, Jr., Ph.D., who is the executive producer, host and writer of MAKING BLACK AMERICA: THROUGH THE GRAPEVINE, with esteemed scholar Evelyn Brooks Higginbotham, Ph.D., who is the former past president of ASALH, on Wednesday, September 28 at 8pm ET | 5pm PT. Explore the themes and content in MAKING BLACK AMERICA as Professor Gates discusses his work and his process for his new documentary in dialogue with his long-time friend and colleague Professor Higginbotham—both are foremost scholars in the field of African American history.

ABOUT MAKING BLACK AMERICA: THROUGH THE GRAPEVINE

MAKING BLACK AMERICA: THROUGH THE GRAPEVINE is a four-part series that explores Black Americans’ Centuries-Long History of Establishing Communities and Attaining Social, Political and Economic Success in the face of racial segregation;  the documentary premieres on PBS stations across the country starting on Tuesday, October 4 at 9pm ET (check your local listing). In this latest series from the acclaimed Harvard scholar and documentarian, Gates and director Stacey L. Holman chronicle the vast social networks and organizations created by and for Black people beyond the reach of the “White gaze.” During the series, Gates sits with noted scholars, politicians, cultural leaders, and old friends to discuss this world behind the color line and what it looks like today. MAKING BLACK AMERICA takes viewers into an extraordinary world that showcased Black people’s ability to collectively prosper, defy white supremacy and define Blackness in ways that transformed America itself.

Henry Louis Gates, Jr. is the Alphonse Fletcher University Professor and Director of the Hutchins Center for African & African American Research at Harvard University. Emmy and Peabody Award-winning filmmaker, literary scholar, journalist, cultural critic, and institution builder, Professor Gates’s most recent books are Stony the Road: Reconstruction, White Supremacy, and the Rise of Jim Crow and The Black Church: This Is Our Story, This Is Our Song. He has also produced and hosted more than 20 documentary films, most recently The Black Church on PBS and Black Art: In the Absence of Light for HBO. Finding Your Roots, his groundbreaking genealogy and genetics series, is now in its eighth season on PBS.  It has been called “one of the deepest and wisest series ever on television,” leveraging “the inherent entertainment capacity of the medium to educate millions of Americans about the histories and cultures of our nation and the world.”

The recipient of 56 honorary degrees and numerous prizes, Professor Gates was a member of the first class awarded “genius grants” by the MacArthur Foundation in 1981, and in 1998, he became the first African American scholar to be awarded the National Humanities Medal. He was named to Time’s25 Most Influential Americans list in 1997, to Ebony’s Power 150 list in 2009, and to Ebony’s Power 100 list in 2010 and 2012.

Higginbotham is also the immediate past National President of the Association for the Study of African American Life and History, which was founded in 1915 by Carter G. Woodson, the Father of Black History.

She is the co-author with the late John Hope Franklin of the ninth edition and now tenth edition of From Slavery to Freedom (2021). A pioneering and prizewinning scholar in African American women’s history, she co-edited with Henry Louis Gates, Jr., the twelve-volume African American National Biography (2013).

Her numerous awards include most notably the National Humanities Medal, awarded by President Barak Obama in September 2015, and most recently the honorary doctorate from Carnegie Mellon University in May 2022.