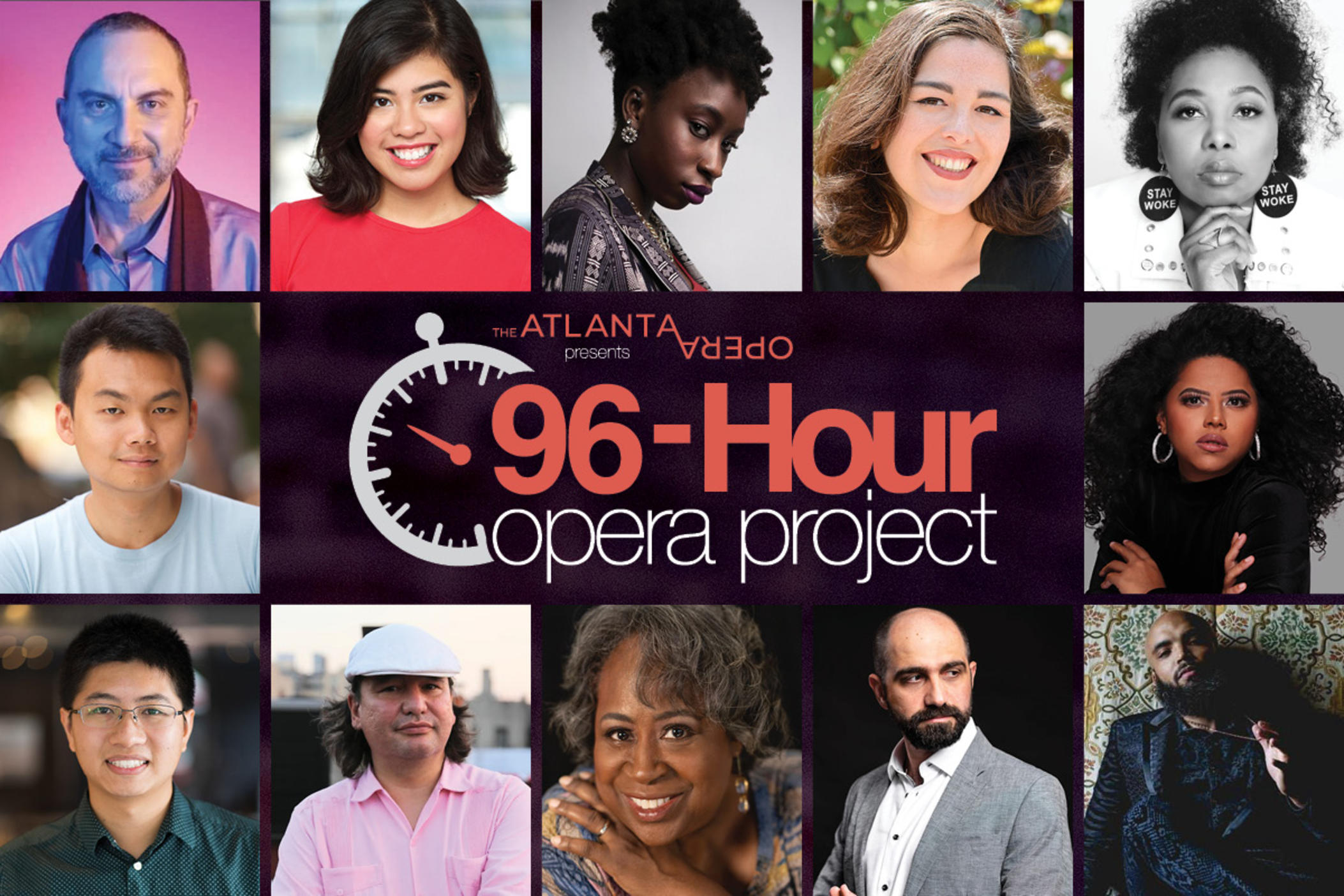 Its July 11-13  broadcast on GPB will mark the first time the 43-year-old Atlanta Opera has presented a 96-Hour Opera Project. And if those figures immediately impress, take a breath before you factor in these...

$10,000. That's the top prize - along with a commission for the wining team to produce future work with The Atlanta Opera. "I'm hoping that, regardless, every team walks away with notoriety," adds Ashley Mirakian, Chief of Marketing & Audience Development.

"One, it is being filmed. Giving it a broader opportunity to be seen by wider audiences. These pieces have a lot of meaning for the community. And we're putting [the teams] in front of judges that are really influential. So the hope is that there are multiple things that come out of this, creatively."

Late summer 2021. When The Atlanta Opera put out the months-long call for submissions. "Because this was all about reaching out and identifying talent outside what may be considered the traditional opera community, we sought out schools of music that were not just the Julliards of the world," Mirakian explained. "We made sure we were connecting with HBCUs [Historically Black Colleges and Universities]."

"And I have to say we did rely on word of mouth as well. After all, there's a very small community of composers and librettists.

May 25, 2020. The day a 46-year-old Black man named George Floyd died under the unforgiving knee of a White Minneapolis police officer, the world contemplated how to respond to the murder captured for 9 minutes and 29 seconds on a body camera - including The Atlanta Opera.

"All of us were doing some serious soul-searching," Mirakian offered. "And we thought the best way to do the work we felt charged to do is to create opportunity."

200 years or more. Usually, that's how old the shows are that Tomer Zvulun programs, But in case the title of this one wasn't clear, The Atlanta Opera's Carl W. Knobloch, Jr. General & Artistic Director told the hundreds gathered at Morehouse College's Ray Charles Performing Arts Center Monday night that staging a production put together in four days may have been a first for him!

The 24-Hour Opera Project. Yes, this isn't the first time The Atlanta Opera has made an "improvisational theater" effort, as Mirakian called it. She wasn't at the opera at the time - "maybe 10 years ago" -  but it's her understanding it was "like a marathon. But it was something we wanted to try again; and give everyone a little bit more time and structure this time around."

10 minutes. Speaking of structure, that's how long each of the six teams has to tell the stories (they chose) of Guillermo, a real Mexican immigrant who gradually lost his sight in adulthood but gained such a love of martial arts he became a Taekwondo master; the 1906 Atlanta Massacre through the eyes of a loving couple; a dark, comedic take on the 1939 debut of "Gone With The Wind" in Atlanta; a tale drawn from the life of  Jimmy Doi - a World War II veteran who was also a Japanese internment camp detainee - that still manages to be relentlessly hopeful; another unflinching, inspired take on two visitors in Atlanta during the Atlanta Olympic and Paralympic Games in 1996; and finally, a tracing of the lineage between the 200,000 Black men who fought in the Civil War to the Black Lives Matter movements of today.

6 people. A composer and librettist (featured in the image above), two singers, a pianist and director make up each of the six competing teams. Some 70 applicants raised their hand to take part, Zvulun said. With Mirakian adding: "Again, the goal, this was meant to identify communities that have been totally underrepresented. Haven't had a seat at the table...or even more specifically, on the stage."

5 area nonprofits were paired with the aforementioned teams, "who we thought, you know, storytelling is their jam," qualified Mirakian: The Atlanta History Center; The Center for Civil and Human Rights; The Fulton County Library System; The Japan American Society of Georgia; and We Love Buford Highway.

Yet another first?! Not to give anything away, but since when did operas end with a profane word? (You'll just have to watch, and hear - and more than likely appreciate.)