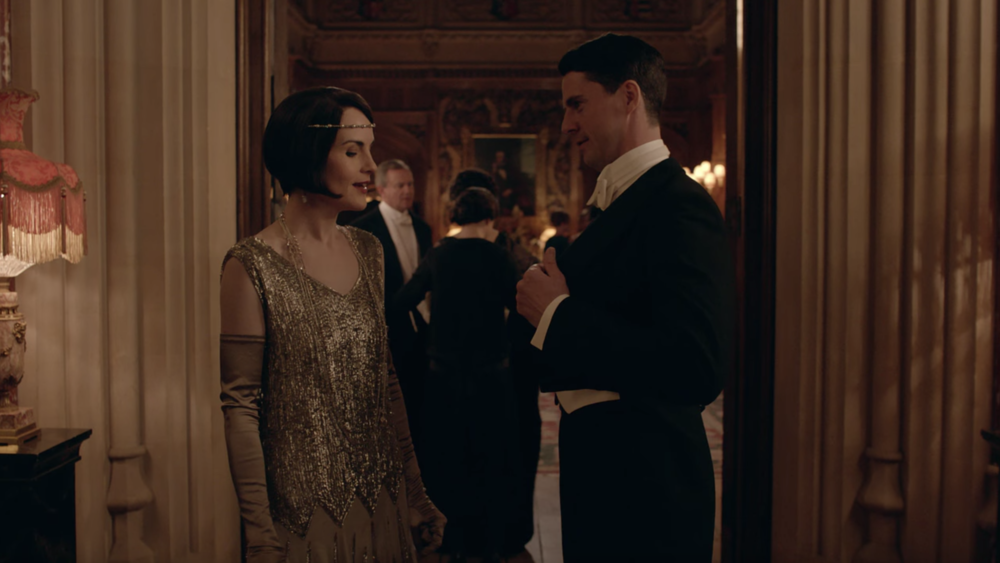 Familiar faces and new relationships descend upon the Downton Abbey cast in this week’s batch of episodes! And despite Mr. and Mrs. Carson being absent for a portion of it while away on their honeymoon, things still seem to run smoothly upstairs and down. Let’s recap all of the jaw-dropping, sweet, and painful moments!

With Season 6 being the final Downton Abbey hurrah (at the time it was released, at least!), I remember going in hoping for some references to past seasons and historical touchstones of the time. These episodes certainly delivered on that, beginning with the re-introduction of maid Gwen, now Mrs. Harding and very involved with her husband’s work in creating a school for women, and Lady Shackleton, once a prospective employer for Mr. Molesley and prospective partner for Lord Merton, now the mentioned aunt of Henry Talbot. Mary’s faces in both reveals are some of the highlights of Episode 4 as Henry came through with his word at the end of Season 5: he’d find a way to see her next time he was in Yorkshire. But as a Sybil fan, Gwen’s story of working with Sybil to plan her exit from service never fails to bring tears to my eyes. Tom’s expression and words in this scene are equally wistful, and not even Thomas’ nefarious plans to expose Gwen for what she used to be could ruin the day. 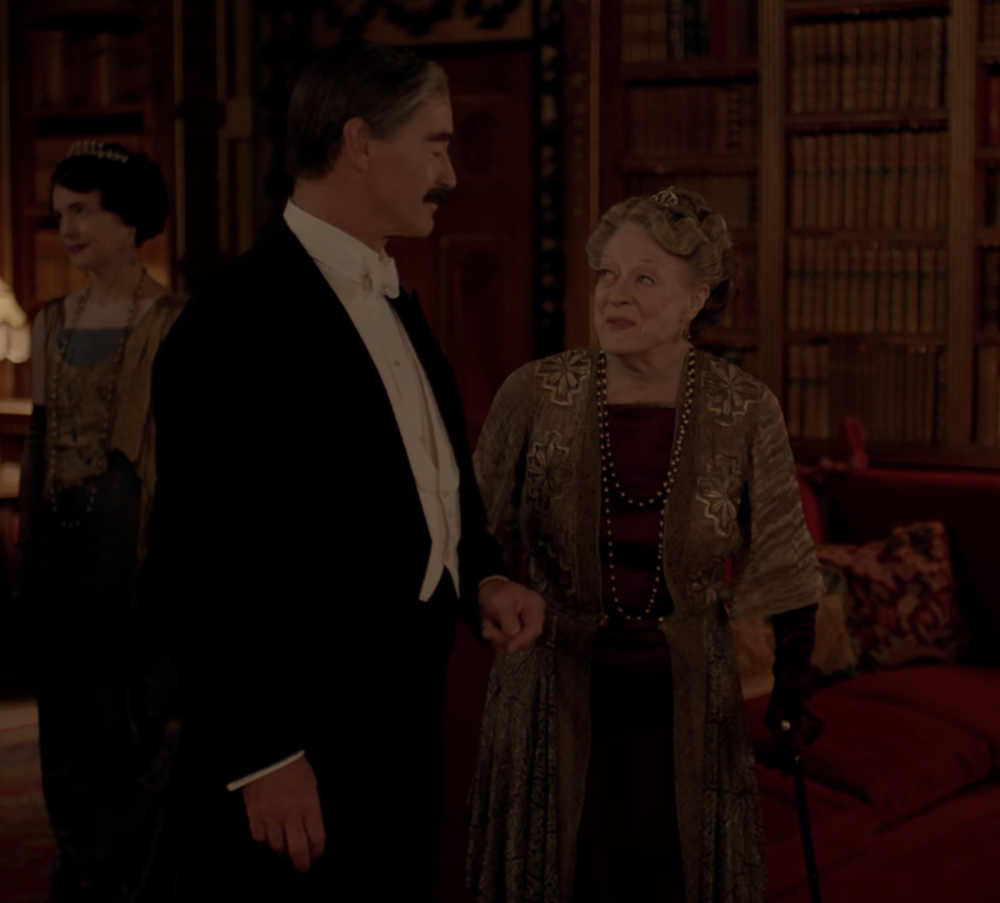 But these episodes also introduced a ‘familiar face’ of sorts, even though I only knew him by name the first time I watched these episodes: NevilleChamberlain, future Prime Minister. At this time, he’s serving as the Minister of Health and Violet puts some old blackmail to use in order to get him to Downton and on her side to keep the hospital running as it always has. With the Royal Family’s and Dame Nellie Melba’s appearances in Season 4 and the Downton Abbey movie, it’s a treat when the show brings in their version of real people from the period and how they interact with the Granthams and their staff and friends. Additionally, his appearance at dinner becomes one of the most memorable meals in Downton Abbey history. While Robert certainly has a way of making dinners dramatic (See: Sarah Bunting), it’s in the midst of a Cora and Violet dispute that his ulcer decides to burst, launching blood across the dining table. It gives the hospital debate a temporary cease-fire, but alongside all of the excitement and uncertainty, Tom uncovers exactly what Violet has on Neville Chamberlain. Incidentally, it’s always been one of the most amusing parts of the episode for me.

New relationships also emerge in these two episodes, from romantic to platonic. Mr. Carson and Mrs. Hughes (I agree, it’s hard to think of them as Mr. and Mrs. Carson even after all these years since Season 6 debuted!) leave their living arrangements at Downton behind to move into a cottage together and enter growing pains as a newly married couple. Mr. Carson’s standards for cooking and keeping a house aren’t met by Mrs. Hughes, and she goes to Mrs. Patmore for help in an attempt to smooth over the transition. Other relationships below stairs evolve too: Mr. Mason finally moves into Yew Tree Farm, Andy’s secret is found out by Thomas and in turn, he helps him begin to learn how to read, and Anna’s pregnancy turns into a frightening experience that leads Mary to whisk her off to London for Dr. Ryder’s help. Finally, however, something is resolved quickly and easily for Anna and Bates: with the stitch put in, she’s pregnant at last. 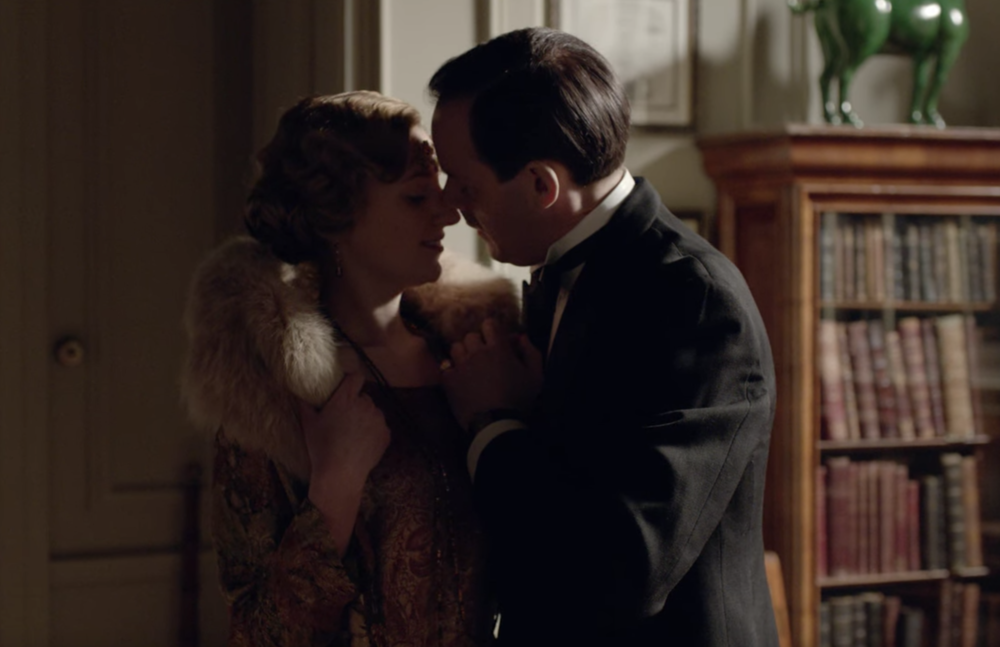 And for the grand upstairs romances, they’re heating up too, whether at Edith’s London flat or at a racing track in Yorkshire. Bertie Pelham, perhaps the sweetest and kindest character on the show, boldly kisses Edith and takes her to a restaurant she adores after determining they both have the same taste. Meanwhile, Henry Talbot flirts with Mary during dinner at Downton, invites her and Tom to watch him test a car he wishes to race at Brooklands, and meets her in London for a dinner date. She’s insistent that she won’t return his advances, considering his prospects and interest in cars, but we know it’s only a matter of time and more explosive drama (literally and figuratively) that will eventually bring them together.

I should have seen this coming, and I can’t even blame the good people at Downton Abbey Inc. for the trauma I’ve endured. Frankly, none of us can. Things were going too well for everyone this season for episode 5 not to end with Robert’s stomach exploding at the dining table. In front of Neville Chamberlain, no less. For anyone who has not seen episode 5 yet and thinks I’m exaggerating, I’m not. If blood isn’t your thing, maybe skip the last 10 minutes or so. 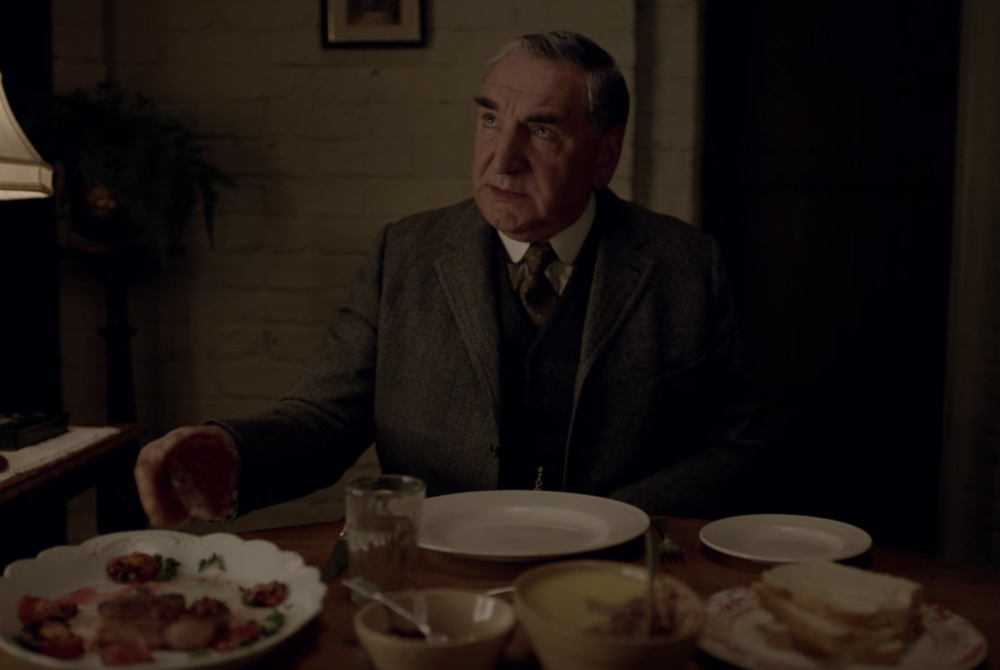 Off to a great start!

Beginning where we left off last week, the newlyweds returned from their honeymoon and promptly began getting on each other’s nerves, with Mrs. Carson not knowing how to cook and Mr. Carson somehow managing to criticize her preparation of a meal they both know she didn’t prepare. This wasn’t a major plot point, I just thought it was hilarious.

Daisy’s worked herself into a frenzy over a situation she invented herself, with very little encouragement. After the Drewes were exiled from Yew Tree Farm following the unpleasant kidnapping situation, Daisy assumed the Granthams would give it to her soon-to-be homeless father-in-law. She almost got herself fired confronting Cora over a decision she wasn’t making fast enough, despite the rest of the staff literally begging her to chill. I’m not expecting Daisy’s chill to reappear any time soon. She might have a little boyfriend soon, though! 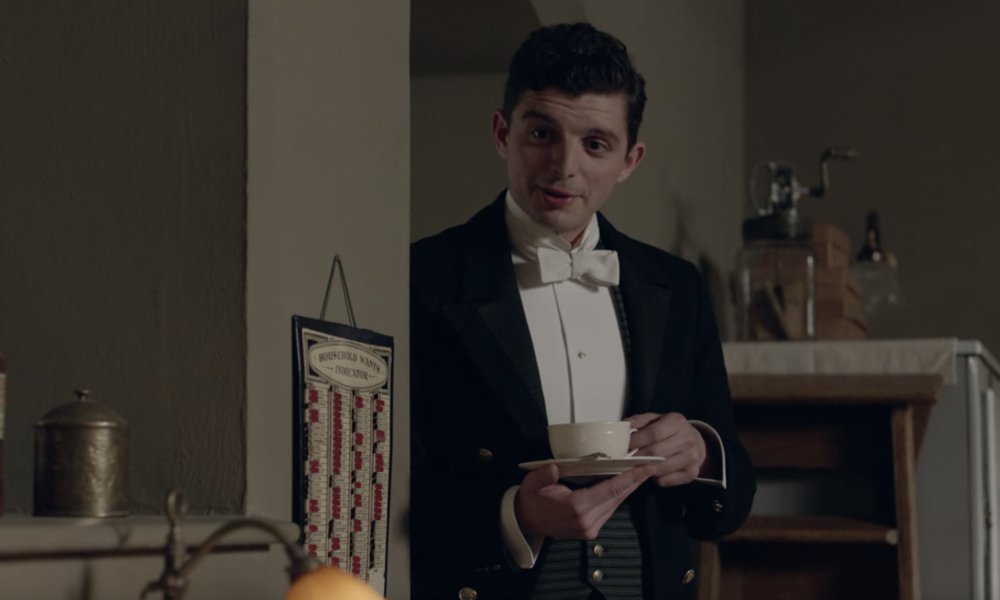 Andy, the new Tall Boy, is very keen to learn all about farming (it’s his dream, somehow) and is going to be working with Mr. Mason when he isn’t needed at Downton. Every time the camera lingers on him you can see Daisy and their 12 children in his eyes, but he has to learn how to read first. His inability to understand the books Mr. Mason lent him about raising pigs caused him to finally thaw on Barrow after he offered to teach him. I don’t understand Barrow’s motivations any more than Barrow does, but I hope he makes as many friends as possible.

Upstairs, Cora and Isobel are still fighting with Violet over the hospital. The Dowager Countess is absolutely formidable, willing to do whatever it takes to get her way. The entire family knew she blackmailed Neville Chamberlain and went, “that’s grandma!” If I were Cora or Isobel I certainly wouldn’t be accepting any invitations from Violet any time soon. Who knows how many lives might have been lost if Robert hadn’t distracted everyone by projectile spewing blood at them.

Meanwhile, when Mary wasn’t saving babies, she was falling in love with her dashing doppelganger, Henry Talbot. Also known as Man Mary. Leave it to Downton to have this poor woman fall in love with a racecar driver. Edith was in London being progressive and falling in love with Bertie. Judging by the way episode 5 ended, I fully expect Michael Gregson to pop out from behind the curtains the next time they’re alone in her apartment.