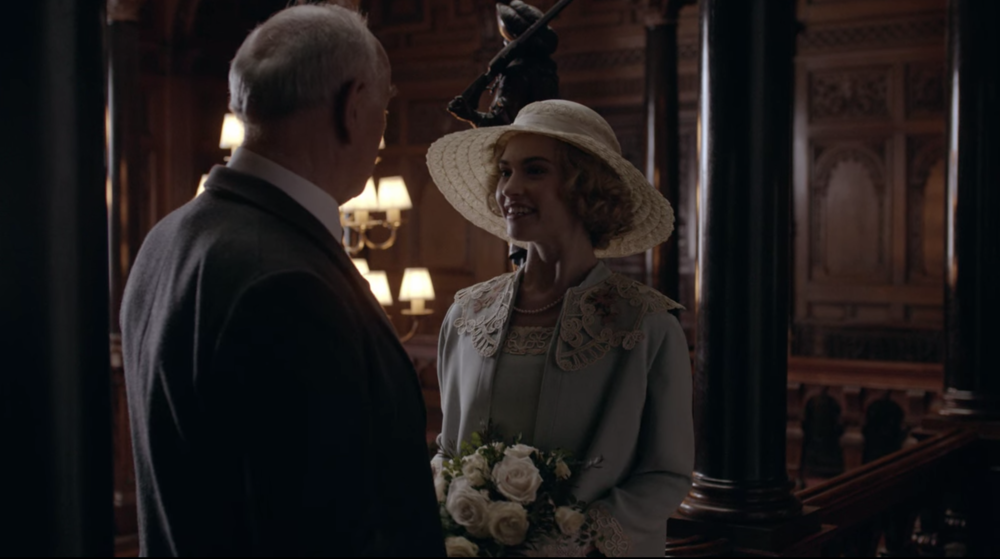 Rose and Atticus are married! Even though it wasn’t a terribly long courtship, no wedding on Downton Abbey goes off without a hitch and this one is no different. With the first hurdle of having Lord and Lady Sinderby finally meet Lord and Lady Flincher. Rose’s mother hasn’t been spotted since the end of Season 3 and frankly, I never miss her when she’s gone. As the Dowager Countess comments, she’s been in a rage since she was young and her disdain continues as she and Lord Flincher arrive in London with a barely-kept secret: they’re divorcing, something Lord Sinderby doesn’t approve of. 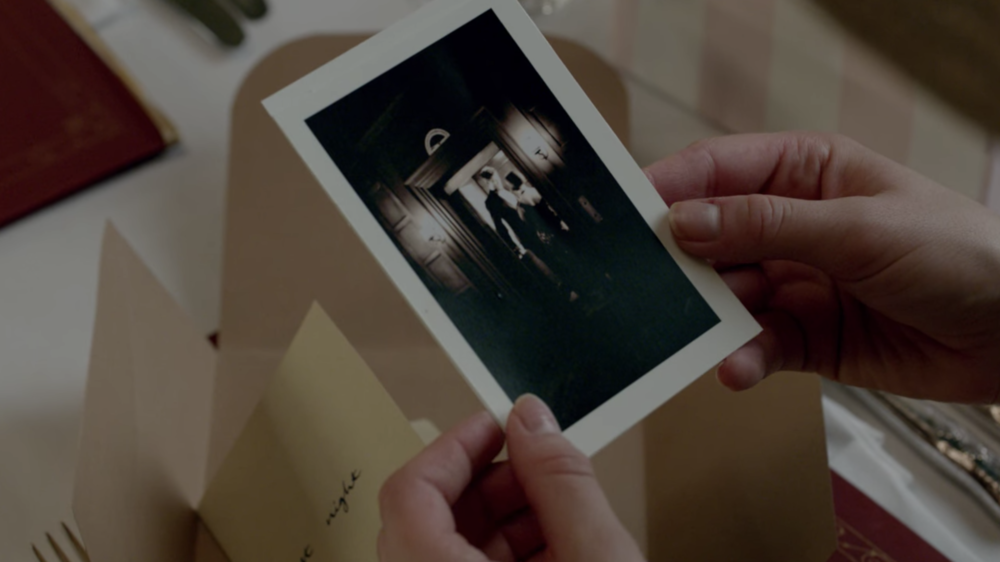 Who could be behind this?

Tensions are already running high when Atticus is set up with a woman at his stag party, but no matter how many times I watch this episode, it shocks me that Rose doesn’t immediately believe her mother could be behind this. Even though they’ve spent a considerable amount of time apart, they still barely got along before she left for India. Luckily Lord Flincher is not as dismissive of the idea and uncovers his wife’s plot, but it’s still strange that after having it out with Atticus and ruling out that Lord Sinderby had anything to do with it that she wouldn’t suspect her mother. Perhaps it’s due to nuptial nerves or Rose’s generous and kind heart, but it’s still a peculiar plot twist to me. When I saw this episode the first time, I immediately thought Lady Flincher was more than capable of causing such problems, especially with her narrow-minded views shared throughout her visit. Nevertheless, the debacle did give us Atticus standing up to his father in Rose’s defense and Lady Sinderby threatening to leave him if he tried to stop the wedding, both of which are always entertaining.

Speaking of entertaining, both of these episodes are opportunities to finally put Miss Denker in her place, even for a little while. Thanks to Thomas and Spratt respectively, she’s caught in a gambling scheme and a culinary scheme, neither of which she’s able to deliver on. Neither Thomas nor Spratt are likable most of the time, but at least in Thomas’s case, he means well when looking after Andy. Unfortunately, none of the rest of the household seems to understand that for once, Thomas’s heart is in the right place. 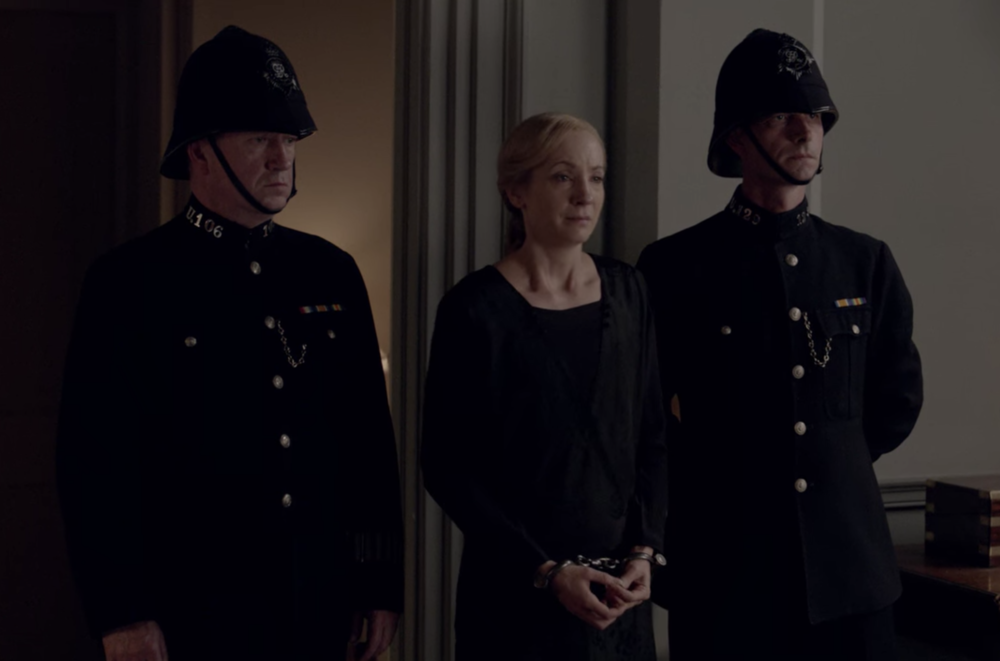 Caught by the fuzz.

And in the grand scheme of happy events leading to unhappy ones, Anna is finally arrested for the murder of Mr. Green, something neither she nor Mr. Bates committed. At least her prison sentence is far shorter than his was in Season 3, but the scene where she’s removed from Crawley House and taken to jail is a tough one for Mr. Bates, Lord Grantham, and Lady Mary to endure, with Mary giving one of the best lines of the season: “I am not ‘Miss,’ I’m Lady Mary Crawley!” As spiteful as she can be (especially in Edith’s case), she will defend most of the people she loves through thick and thin, especially Anna. A trait that extends into the final episode of Season 5 that takes the family into Brancaster and truly begins several of the final arcs of the show, particularly where Mary and Edith are concerned.

After the glitz and glam of Season 4’s finale, Season 5, while fun, feels like a bit of a let-down to me if I’m binge-watching Downton Abbey. Brancaster is lovely (and, as a rewatch, you know it’ll become Lady Edith’s new home!) but the intrigue with the Prince of Wales’ letter, Rose’s presentation at court, at Martha Levinson’s quips just stand out a bit more to me. Nevertheless, the Season 5 finale shows that even Lord Sinderby has a colorful past and bids farewell to Tom, Rose, and Atticus. But most importantly, it introduces us to Henry Talbot and Bertie Pelham, who will both play larger roles in Season 6 and the movie. It’s hard not to be interested in Henry when he doesn’t immediately show interest in Mary, and with a star like Matthew Goode in the role, both on my first and tenth rewatch I’m hoping Henry will resurface in York or London (he will and does!). But this time around, I never noticed until now how Bertie Pelham, the agent, is spoken of: someone that Atticus (and presumably others) always feels bad for. And while he’s friendly and without big dreams of his own, he’s already a good fit for Edith, even if no one sees it yet. Admittedly, I didn’t find him as interesting as Henry on the first watch but this time around, I think I’m going to pay a bit more attention to their scenes earlier in Season 6, and not just the mealtime confrontation between Mary and Edith about Marigold’s parentage. 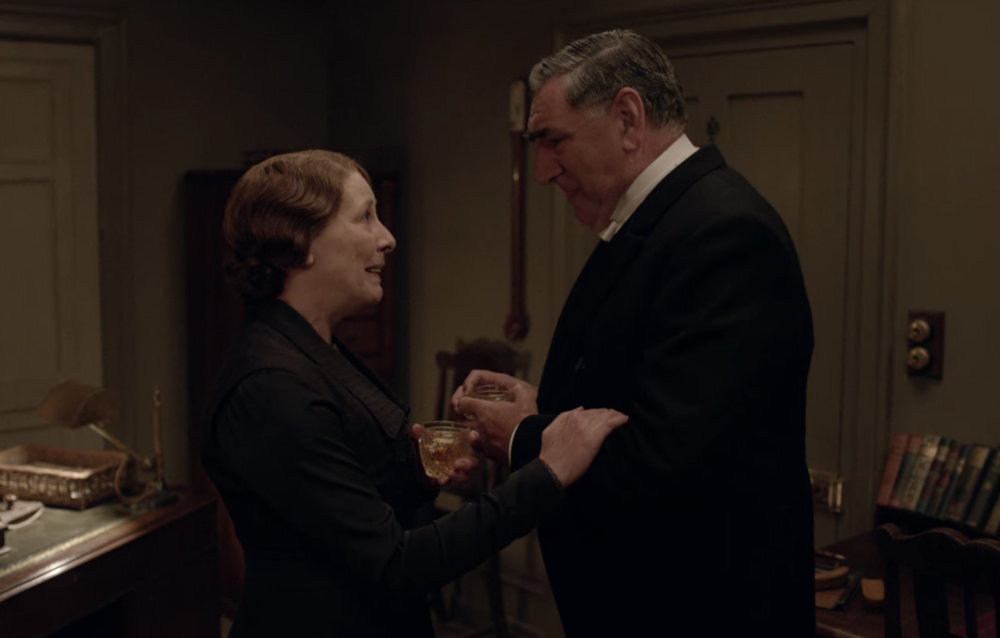 Of course, other important events unfolded in this finale too: Violet finally bids farewell to Prince Kuragin, Downton bids farewell to Tom, Mr. Bates finally sneaks back to see Anna, and at long last, Mr. Carson proposes to Mrs. Hughes. As far as presents go in this finale and holiday special, that was definitely the best one kept for last. I still tear up each and every time they go downstairs during the party and he’s finally able to ask her! It won’t be smooth sailing, but like every wedding before them, when is a Downton Abbey wedding ever easy?

Season 6 of Downton Abbey kicks off Friday, August 13 at 7 p.m. with Episodes 1, 2 and 3 airing back-to-back. But if you want to binge the entire final season now and see Mr. and Mrs. Carson wed early, you can stream it all on GPB Passport.

I cannot even begin to describe how happy I am that Anna is not about to hang for a crime she didn’t commit. I didn’t know if I would be able to deal with another unjust Downton Abbey conviction. As always, a lot happened in last week’s Downton Double Feature, but I needed to get that off my chest first. I have been dreading this storyline ever since I accidentally spoiled myself by reading one of Rachel’s contributions. 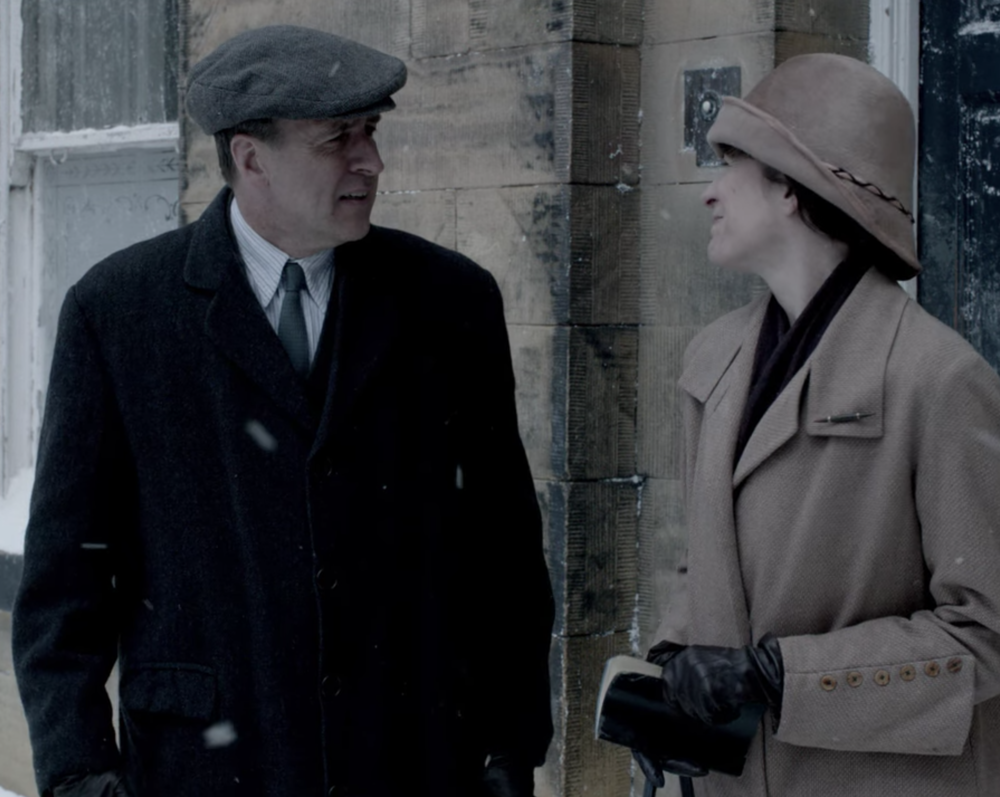 Molesley and Baxter are on the case.

After Scotland Yard finds out that Green was a sexual predator, they come back to Downton to question Anna again. Given what we know about Green, surely there had to have been dozens of victims in London at the time, no? Anyhow, Anna ends up in a line-up while they’re in London for Rose’s wedding. Then she ends up in jail. Bates writes a letter confessing to the murder then flees to Ireland, thinking they’ll have no choice to release his wife, and this is where things get wild. I would never have guessed, in a million years with the aid of an AI fed nothing but every episode of Downton Abbey on a loop for a million years, that Molesley and Baxter would be the ones to exonerate him. Even though the police already knew from witnesses’ physical descriptions of the culprit that it couldn’t have been Bates, at the end of the day they’re both free and that’s all that matters. To me, at least. The entire investigation was sloppy and nonsensical anyway. Merry Christmas to those two, who have a very strange experience in common.

Of course, the main event was the wedding of Rose and Atticus. Rose’s divorcing parents attend, and Susan is her usual pleasant self. She and Lord Sinderby are united in their hope that their children don’t go through with it. Susan, however, really goes the extra mile, setting Atticus up to be photographed in a compromising position with a floozy after his bachelor party. When that doesn’t work, she announces her divorce, hilariously, in the middle of the wedding, hoping to force Sinderby to call things off. That doesn’t work either! As much as he dislikes the idea of his son marrying a woman that doesn’t share his family’s faith, he eventually warms to Rose and the Granthams after they save him from having his side family exposed, also hilariously.

Speaking of salvation from side families, Miss Violet was a lot more scandalous in her day than she let on! After the princess arrives and burns her to a crisp with her eyeballs, Violet tells Isobel the story of how the princess dragged her out of a carriage by her hair before she could run away with the prince. This is Jerry Springer-level messy. Salute, Violet! Clearly, her generation was not at all as prim as she’d have her family believe. Or maybe Russia was just wild. Either way, 10 out of 10 on the Hot Mess-o-Meter. 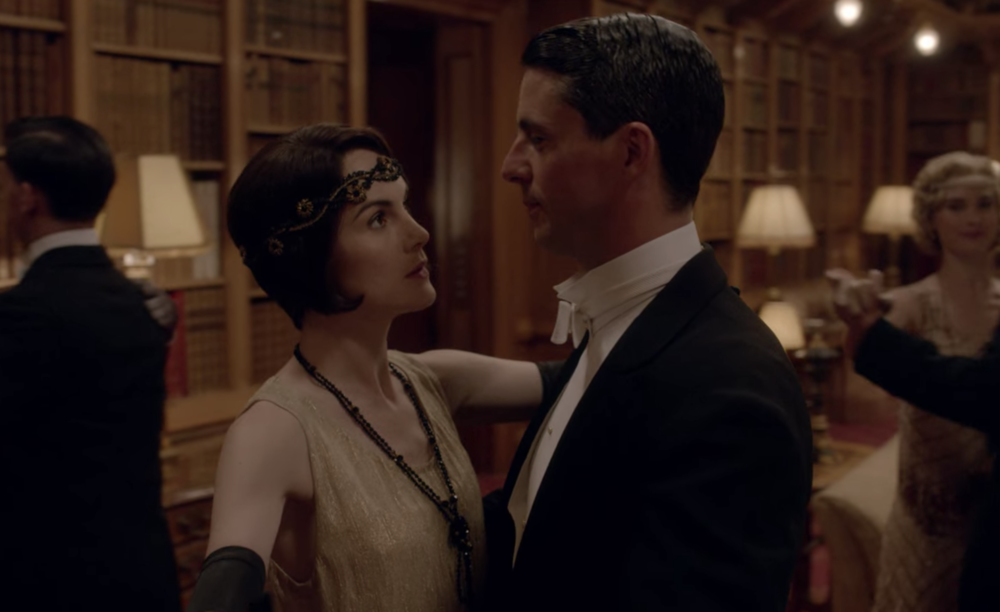 Elsewhere, Robert finally put two and two together and figured out that he had another grandchild. Good for him! Now Mary is the only one who doesn’t know. Mary will probably be too distracted falling in love with her male clone to pay any attention to her sister for a while. I can’t help but think she and the equally pointy Henry Talbot are perfect for each other because, well, they are the same person.

This week’s highlights are Barrow’s grand revenge snowball and Robert’s very sweet gesture to Mrs. Patmore. Tune in Friday at 7 p.m. as we begin season 6 and keep the ball rolling with every episode streaming right now on GPB Passport.