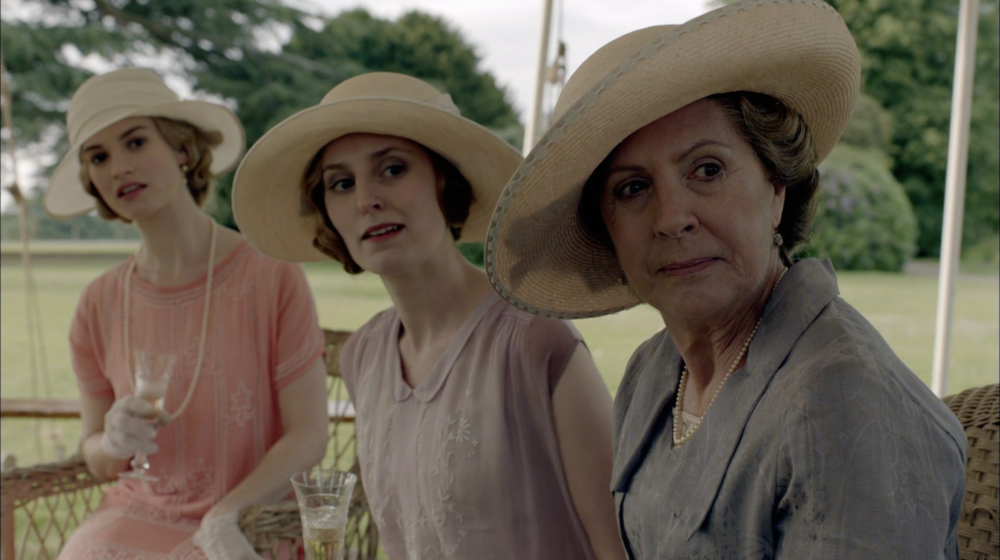 With the arrival of the pigs (permanently), the departure of Robert and Thomas (temporarily), an illness, a proposal, a pregnancy, a death, and a festival on Downton’s grounds, there’s no shortage of drama on Downton Abbey as Season 4 ramps up to its dazzling finale in London. I find that Downton tends to do this often across its various seasons: adding more and more subplots until the final episodes of the season, where everything finally explodes in various heartbreaks, secrets, and reunions. And that’s why we keep watching, right?

Despite all of that, I’ve come to appreciate how much ‘real history’ comes into the plots of these episodes. And in this case, it’s the Teapot Dome scandal. Admittedly, it was a part of American history that was left out in my history classes but I enjoy learning about it now. I’m not sure if I would have looked it up on my own without a cultural touchstone to liken it to, but it helps make the show feel even more real. And more importantly, it reminds me of how much Downton really does belong on PBS: yes, it’s a wonderful story with fully fleshed-out characters, beautiful settings, and exquisite costumes, but it offers a glimpse into a world many viewers have never known. Whether it’s the time period, social class, or a country across the Atlantic Ocean, Downton Abbey is a show that both entertains and teaches viewers. 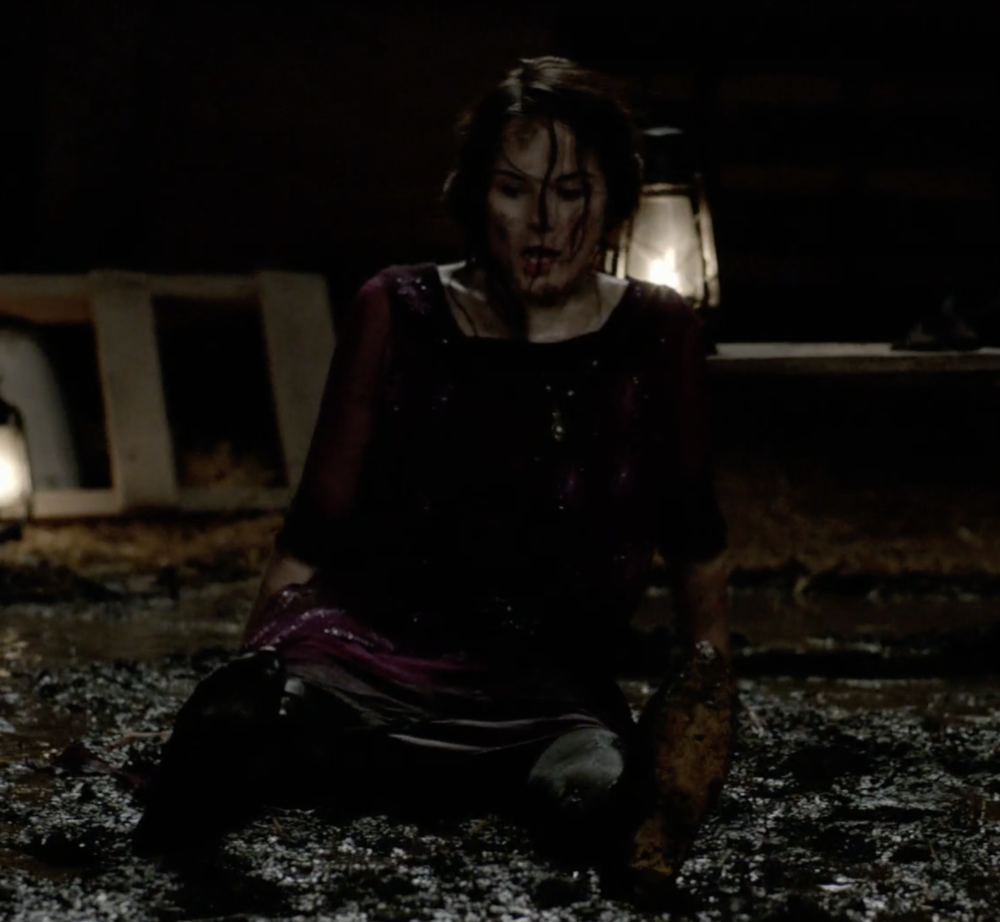 Love is in the air.

Historic scandals aside, local scandals also plague the Crawley family. Just as the estate begins their investment in pig farming, the pigs nearly die after their delivery. They’re saved by Charles Blake and Lady Mary, who gives one of her best scenes in the entirety of Season 4. When I first watched this season, I stood with Charles and doubted that Mary would, quite literally, get her hands dirty to protect her investment.

But she proves both of us wrong each time I revisit this season, and it’s refreshing to see after several episodes of her being particularly snobbish to her various suitors, Edith, and pretty much anything that moves. After all: she’s been married, she knows everything. I can’t attest to how true that is (yet), but it seemingly provides some culinary knowledge as, for the one and only time on Downton Abbey, Mary cooks. She insists she can only scramble eggs, but that’s a step ahead of Robert. She’s proving herself over each episode that she’s more than fit to run Downton in George’s stead, something Charles Blake definitely enjoys. 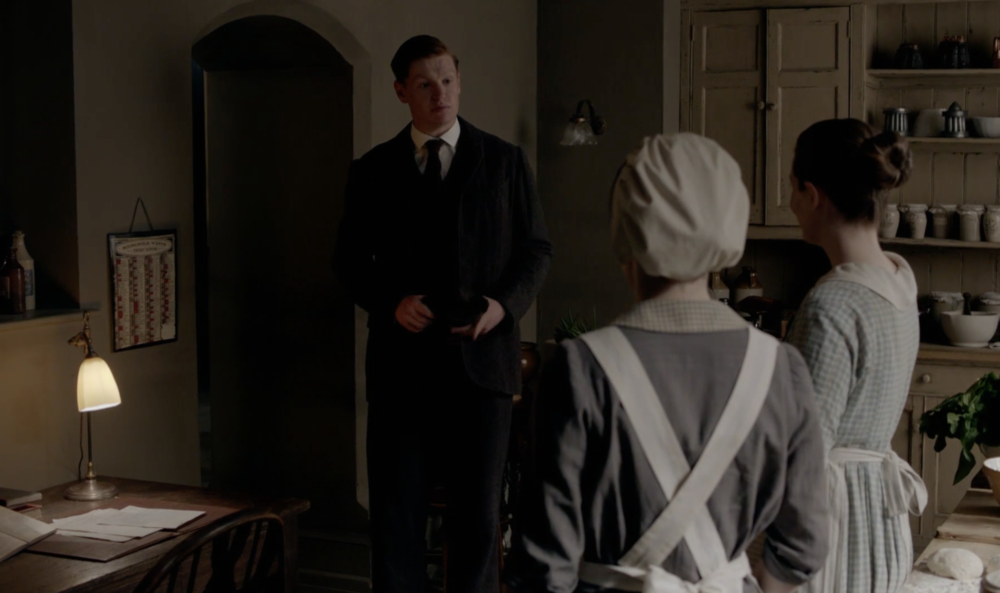 Next, while Mary must deal with all of her men, Rose and Edith have singular suitors to deal with upstairs while the Ivy/Daisy/Alfred/Jimmy love square (finally!) concludes. Unsurprisingly for me, Rose’s secret proposal and subsequent heartbreak is probably the least upset I’ve been over a Downton romance gone wrong. And it’s entirely due to Rose’s own juvenile reasoning: I don’t doubt that she cared for Jack, but Mary’s astute observation tends to win out for me: she wanted to marry him as an act of defiance, to anger her mother. Rose needs to grow up, and at least we know that’s coming in spades over the Season 4 finale and the beginning of Season 5 when she tends to remind me a bit more of Sybil (at least when it comes to finding and supporting a cause).

Edith’s heartbreak is far more painful: she’s pregnant, with no word from Michael Gregson regarding his safety, and must decide to keep or get rid of the baby. Aunt Rosamund comes to the rescue with a spontaneous trip to Switzerland so her niece can secretly bring her baby to term and let it be adopted by a Swiss family, but that doesn’t make the illegal abortion clinic any more harrowing. Call the Midwife fans know just how frightening these situations can be on a PBS drama, and each time this particular Downton episode airs I’m thankful Edith did not go through with it. It could have very well been the end of her if she did. 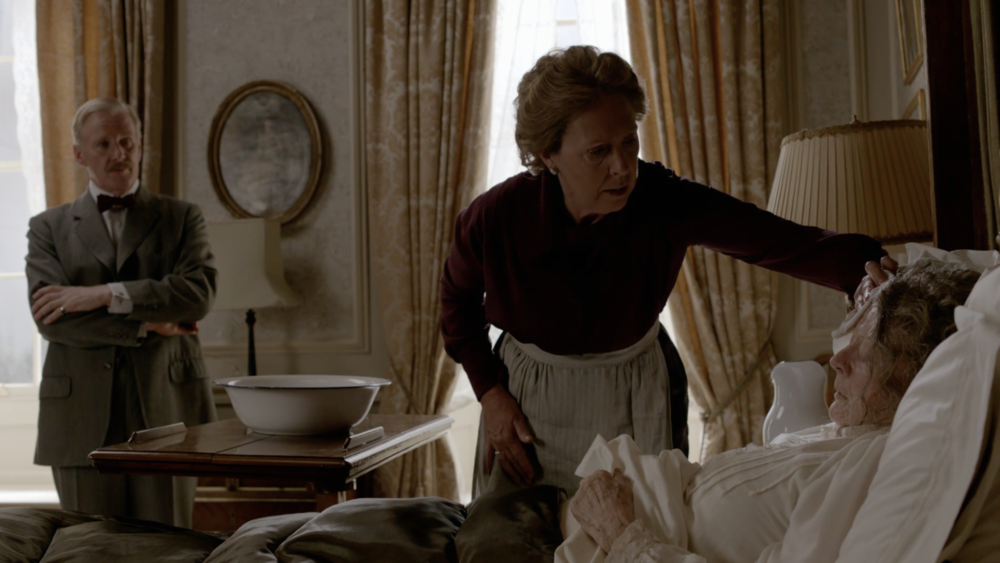 And in the midst of all the relationship drama, Violet suffers a health scare and I still wonder how it took until Season 4 for an illness to weaken her. I never thought the Dowager Countess was in great health before, but at least it served as another reason to strengthen Violet and Isobel’s friendship (and introduced Lord Merton properly). Even if Violet isn’t keen to admit it all the time, I love how these two play off one another. They have one of the most interesting relationships in the entire show and it’s never dull.

But while Violet lives through her illness, another character succumbs to his injuries. No one is sad to see Mr. Green go, but it adds a new problem for Anna and Mr. Bates: is the testimonial Lord Gillingham gave Mary a factual account? And what of Mr. Bates’ day off in York? Of course, rewatching the show we know the truth, but not even an outdoor festival or party can happen without some catastrophe (see: the end of Season 1, the end of Season 3).

Of course, this is just the beginning of new troubles for our favorite gloomy downstairs couple. At least they get a trip to the beach this week while the Crawley family accompanies Rose to London for her formal presentation at court. The Season 4 finale of Downton Abbey airs Friday, June 9 at 7 p.m. on GPB, but you can catch up with Rose’s scandal involving the Prince of Wales now on GPB Passport.

Episodes 6 and 7 were mostly delightful! Even the menace was delightful! There were many examples of the loving relationships that are my favorite thing about the series, though. Especially the “I can’t stand you, but I love you a lot” thing going on between Isobel and Violet.

Robert’s departure to and arrival from America bookend these two episodes. He goes to bail Cora’s sketchy brother out of a sketchy situation (the Teapot Dome scandal) but takes Barrow with him instead of Bates. Mary helped arrange the staff switch-up, knowing that Anna was assaulted and needs her husband with her, but not yet who the perpetrator was. 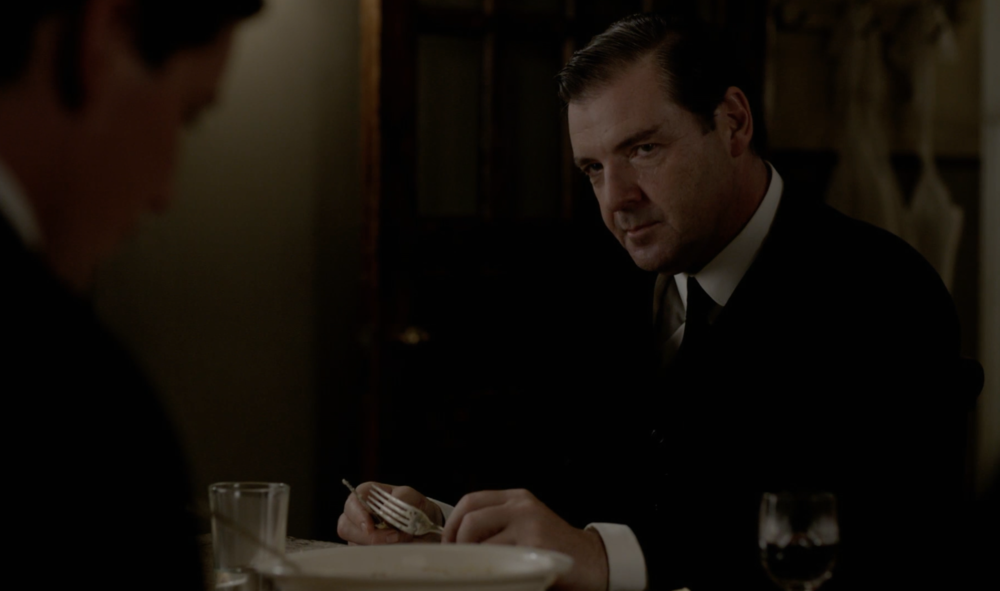 Where did you say you lived?

Unfortunately, Tony is still hung up on Mary and returns to Downton a few times, bringing Green with him. Bates already suspected that Green was the culprit but seeing the way his wife behaves around the man confirms things for him. Towards the end of episode 7, we learn that Green has taken a tumble in front of a bus. Bates just so happens to have taken that day off. I don’t know if Bates pushed him in front of that bus, but I will be very surprised if he didn’t.

In addition to Tony, Charles Blake is also now very much into Mary. They spend a romantic evening covered in mud trying to save the Grantham’s newly arrived pigs. They share a meal afterward, and the scene immediately reminded me of her drink with Matthew, after they stopped hating each other but before they became an item. Between the two suitors, I think Mary is leaning towards him. You never know with Mary, though. I don’t, at least. 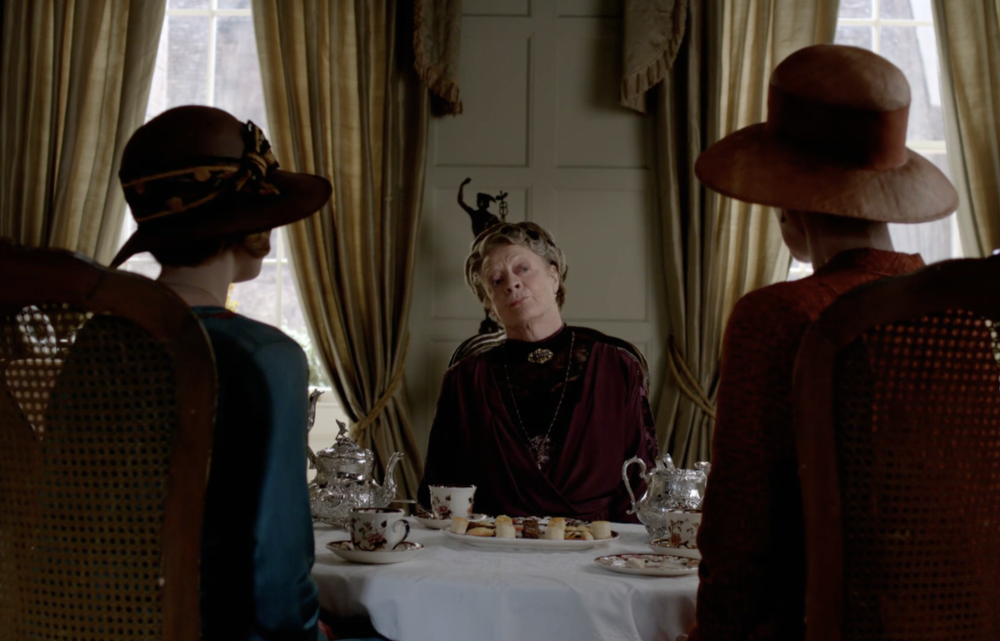 In less happy romantic news, Gregson is still missing and Edith decides to go to London to end her pregnancy. She eventually breaks down to her aunt Rosamund and, after changing her mind about the abortion, they decide to travel to Switzerland to let Edith hide her pregnancy and arrange to have the baby adopted. Somehow, Violet is the only one that side-eyes this scheme. I hope they find Michael soon.

Rose is still in the middle of her scandalous affair with Jack Ross. Their canal date is now on my bucket list but they’re spotted later by Tom in a café. Tom tells Mary, who confronts Rose. Rose tells Mary that she is in love with Jack and that she is going to marry him to punish her mother in the same breath, which was hilarious. In other Doomed Romance news, Ivy rejects Alfred’s proposal and Daisy finally lets him go. Thank goodness. 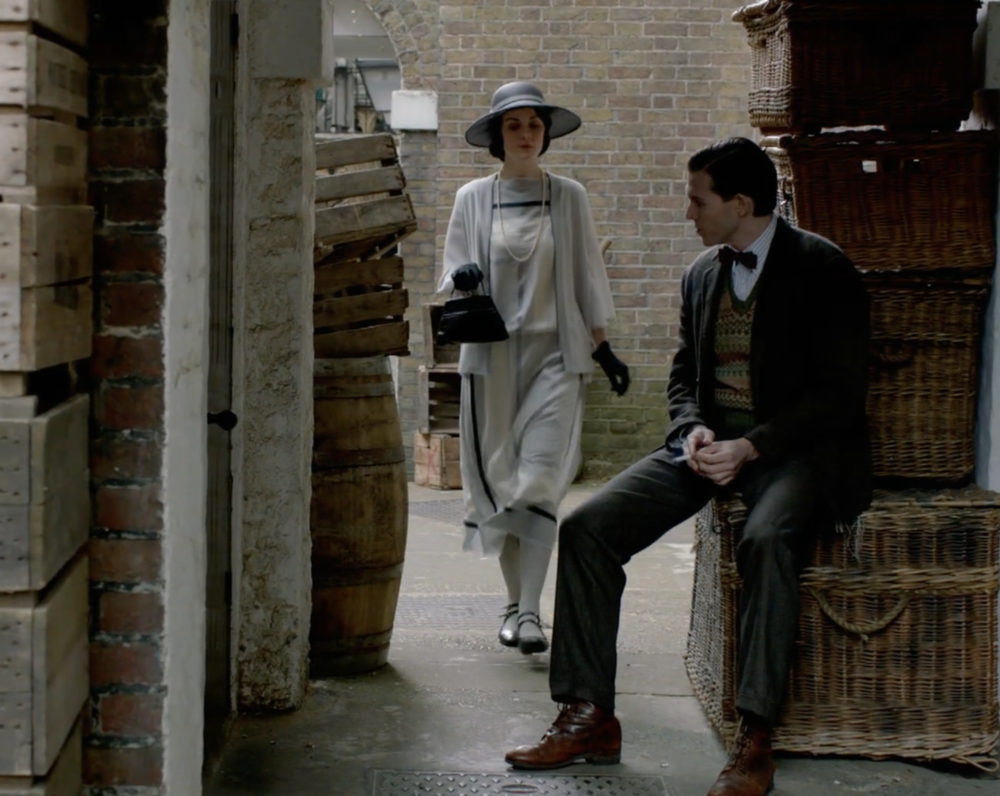 Back to loving relationships, Cora and Robert are so in love it makes my teeth hurt. Their affectionate interactions make me think something terrible is about to happen to one or both of them, but we’ll see. Isobel and Violet really touched my heart. If she was still feeling like she wasn’t really a part of the family, her nursing Violet through bronchitis should put that to rest. They have developed a sisterly relationship that’s beautiful to watch and has developed genuinely and naturally. The two clearly annoy each other to no end but would also fight a bear for one another and their scenes together are always enjoyable.

This week’s highlight is the outfit Mary wore to see Jack Ross. I was stunned. Tune in Friday at 7 p.m. to meet Paul Giamatti as Cora’s brother Harold, or binge all the Downton Abbey your heart desires right now on GPB Passport.