Downton Abbey Revisited – Season 4 Episodes 4 & 5 (Nothing is over.) 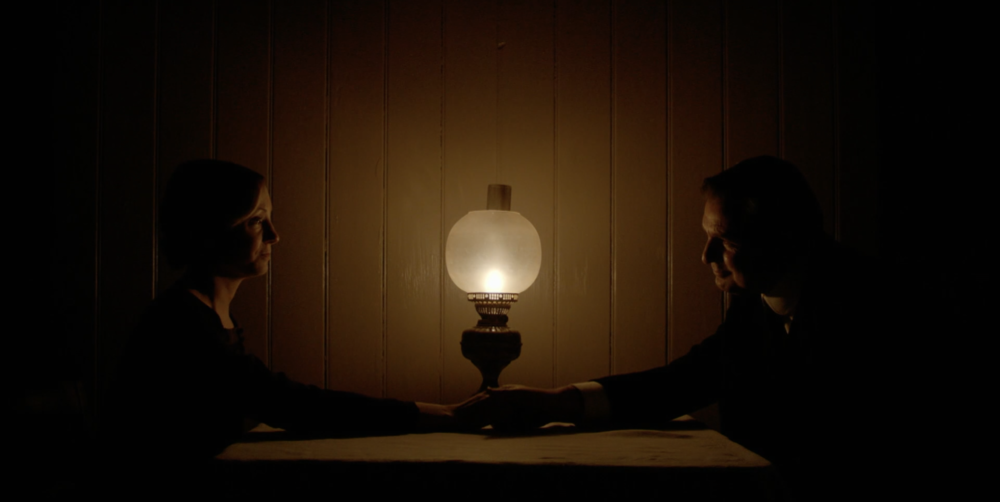 First, if Kirk doesn’t choose the line “A part of history Mr. Carson doesn’t agree with” as the tagline of this week’s blog, I’ll be shocked.

And second, I think the most prominent feeling I get while watching these Season 4 episodes of Downton Abbey is relief. From the first time I saw these episodes to the many, many times I’ve rewatched them, I just feel relief for so many reasons. It’s not quite the warm bowl of macaroni and cheese for me that interviews during our pledge breaks reference, but I don’t feel constantly on edge as my heart, for the past few episodes at least, has been with Anna. 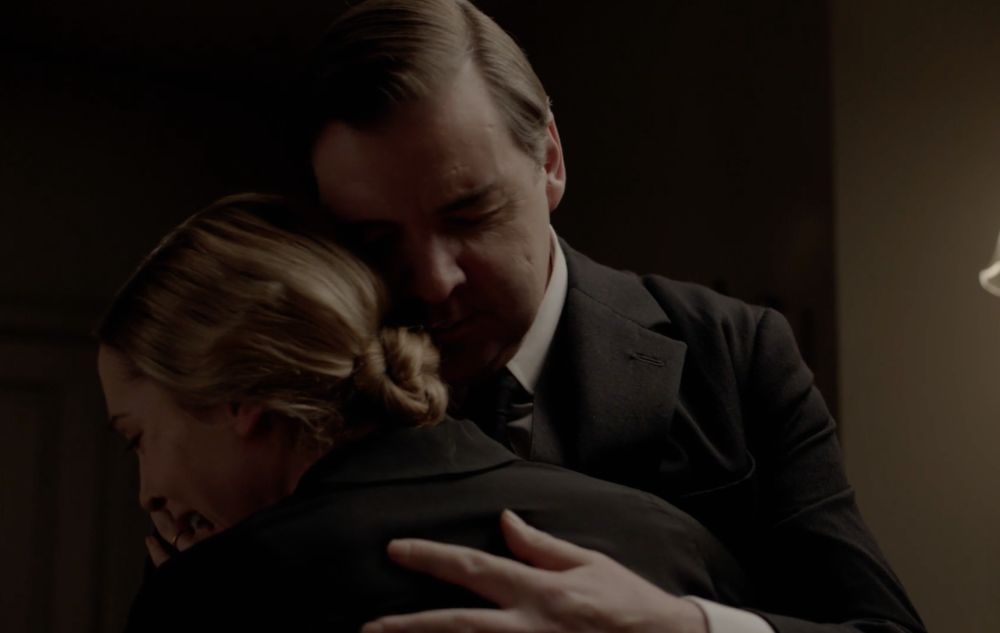 So let’s begin there. Thankfully, her withholding the secret of what happened to her from Mr. Bates is nipped in Episode 4 when Mr. Bates, possibly using one of the many skills he’s picked up over the years, backed Mrs. Hughes into a metaphorical corner and forced her to explain to him what is troubling his wife. Unfortunately, he manages to guess Anna’s rapist easily, a fact that Anna prefers to keep hidden with his temper and criminal record. But at least they’re properly talking again and, as expected from Mr. Bates, he doesn’t hold Anna responsible in the least. It’s still a long road ahead for these two but whenever drama between Anna and Mr. Bates is drawn out unnecessarily, I tend to get bored with the show. Even if it’s progress that’ll have plenty of setbacks in later episodes, it’s still progress.

Though speaking of setbacks, both Tom and Thomas fall back into old patterns. Tom, with his inability to feel like he has a proper home at Downton, and Thomas as he blackmails new ladies maid Miss Baxter to spy on the family and servants for him. Unlike Miss O’Brien though, Miss Baxter is a kind and gentle person with a checkered past and mistakes she wishes to atone for: mistakes that, unfortunately, Thomas knows about and will be sure to use against her. And as far as Tom’s concerned, he’s acknowledged how much he’s changed by living and working at Downton but, yet again, feels displaced. I remember yelling at the television the first time he suggested going to America and each time after, I tend to sigh exasperatedly. Listen up, Tom Branson: the entire family both loves and needs you. If not for you, how will they, especially the likes of Violet and Robert, be dragged into the 20th Century? 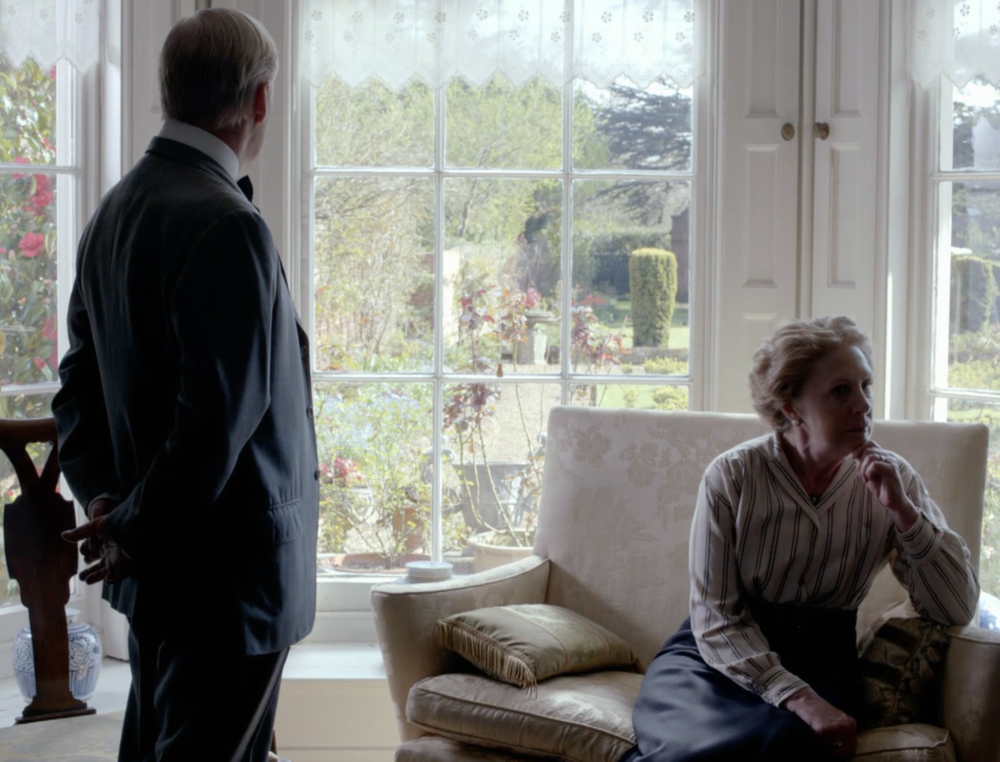 And speaking of old patterns, Violet and Isobel have both picked up their friendly spats and disagreements that remind me heavily of Season 1. Violet hates to be wrong and Isobel has found new causes to take up in order to support the less fortunate, and both must come to reckon with the fact that, in some things, they’re both wrong: Violet regarding the theft of her precious heirlooms, and Isobel regarding her place in young George’s life. These scenes do get excellent quotes from both women though, and it’s just another example of how much I appreciate the way Julian Fellowes has written these roles for, in the polite way of putting it, women of a certain age.

But some characters are moving forward with their lives, which is both exciting and heartbreaking at the same time: I’m talking about Edith, Alfred, and Rose. Edith’s is the hardest one to watch, and another instance of “Just let Edith be happy!” She’s gone to the doctor and gotten news even more unsettling than Michael’s disappearance. Any rewatch of the show has viewers understanding that she’s pregnant and is keeping it to herself, which has her family distraught as to what else has dismayed her besides Michael’s disappearance (and, as we now know, death) in Germany. The worst is yet to come for her, and even knowing that, in the very end, everything will be all right, it’s hard not to reach through the television and give her the biggest hug. 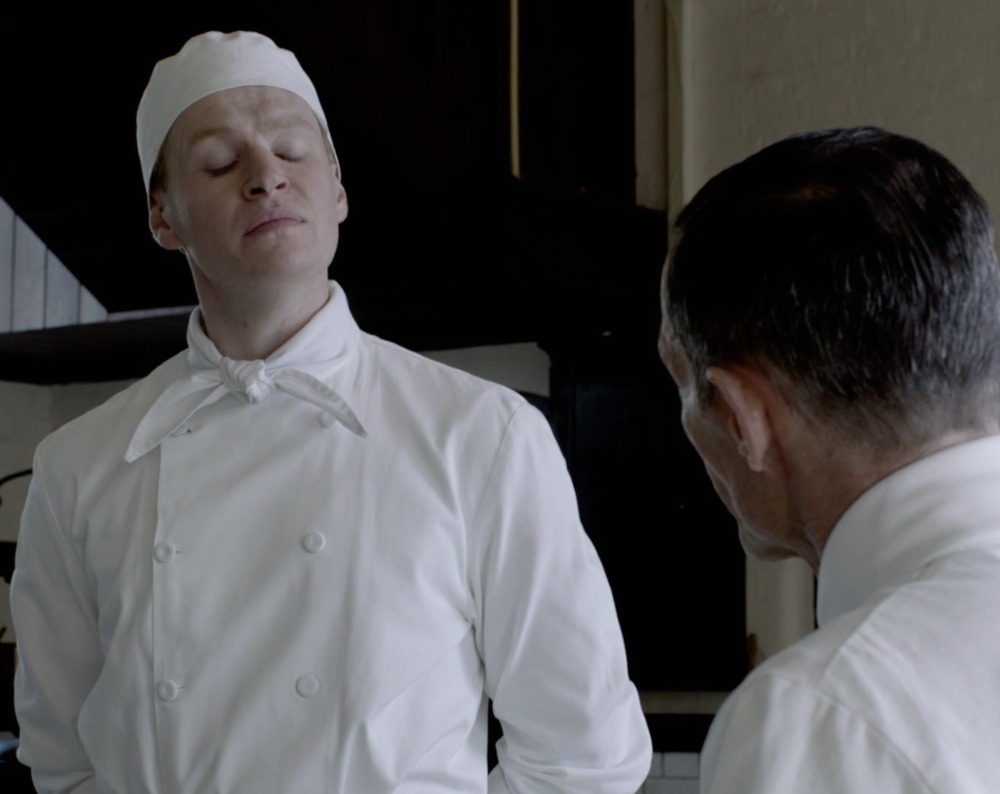 In happier news, Alfred is gone. It sounds dire and it’s not out of malice, but I think the character began to feel a bit stale after he firmly turned Daisy down. I wonder if he was always meant to be a character introduced to give Daisy further growth and development instead of really crafting a storyline of his own, but it’s still wonderful to see him succeed in cooking, enough to earn him a place in London doing just that. The staff pitching in to help him perfect his dishes and get him ready to leave is always one of the most heartwarming parts of Season 4.

But it’s Rose (and to a degree, Mary) who begin new plots for the latter half of the season this week. Rose, in a bid to bring Downton up to the present day, hires the band from the Lotus Club from earlier this season, headed by Jack Ross who causes a stir both upstairs and downstairs by being the first person of color on the show. Both Mr. Carson and Robert’s shocked expressions, paired with Mrs. Hughes’ snark, are some of the best bits of Episode 5. But Rose has done more than just surprise everyone with a London band: she shocked Mary when the latter came downstairs to the Servants’ Hall and found Rose and Jack kissing. For as much as the world is changing, even at Downton, an interracial relationship is too shocking for anyone besides Jack and Rose (and I’m reminded of Titanic whenever I write about this couple) to accept. 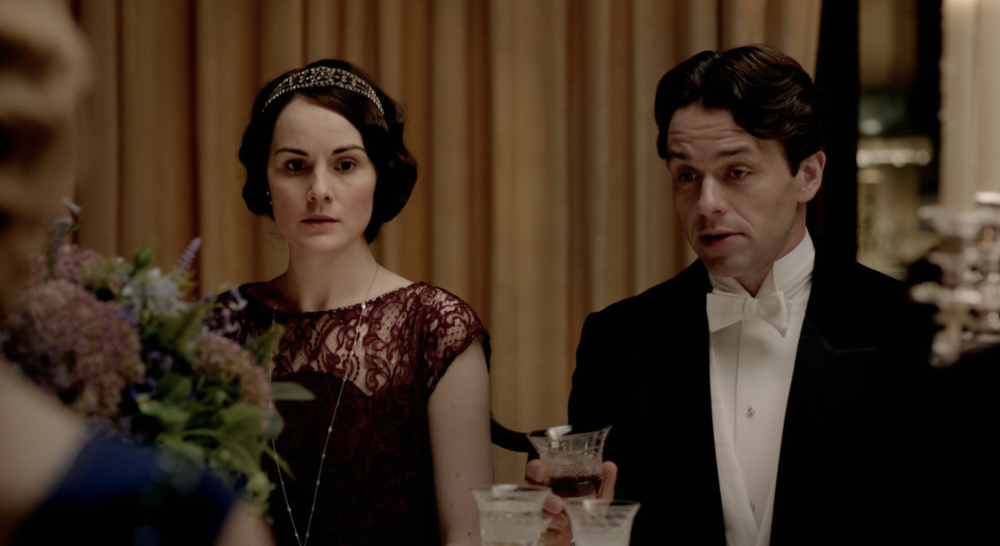 Love is in the air.

Yet Mary has her own drama to contend with in the form of Charles Blake and his distrust of her to bring Downton up to snuff as a proper estate made for food production and not just a symbol of grandeur and days gone by. While it’s not as direct as Lord Gillingham’s entrance, it’s easy to see that he’s yet another contending suitor for Mary, if just for their quips. This is why Evelyn Napier, in my opinion, never had a chance: he’s far too agreeable and bland. Charles gets a rise out of her, one that’ll continue into next week when the pigs arrive at the estate and, to put it lightly, Mary Crawley has no choice but to get her hands dirty.

Episodes 6 and 7 of Downton Abbey Season 4 air Friday, July 2 beginning at 7 p.m. But you can watch Mary try to cook, Robert try to protect Harold Levinson from the Teapot Dome Scandal, and Rose try to carry on her romantic liaison with Jack Ross whenever you like on GPB Passport.

What an entertaining couple of episodes. Spies! Theft! Unexpected pregnancies! Awkward conversations about the slave trade! Let’s get into it. 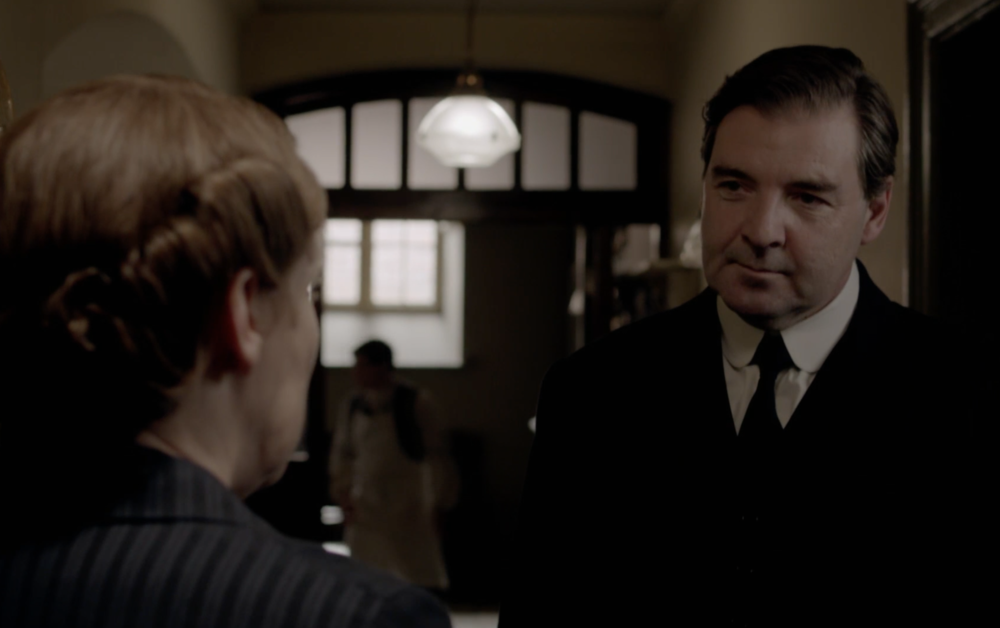 ...and nothing is done with.

At the beginning of episode 4, Anna is still freezing Bates out, ashamed of her assault and terrified of how her worried husband would react if he found out. Eventually, Bates overhears her talking to Mrs. Hughes about her secret and forces the poor woman to tell him what’s going on with his wife. Anna and Mrs. Hughes both lie about who assaulted her, but Bates seems sure about who it was and is determined to find the man and make him pay for it.

A lot was going on downstairs. Cora’s new lady’s maid, Baxter, is making friends and winning hearts and is also very good at her job. She’s also been brought in by Thomas specifically to inform him of what’s going on upstairs. I don’t know what their relationship is, but he’s definitely got some hold on her aside from gratitude over getting her a decent job in a good house. She appears to be just as skilled in manipulation as he is and I’m looking forward to finding out more about her and her relationship with Thomas. 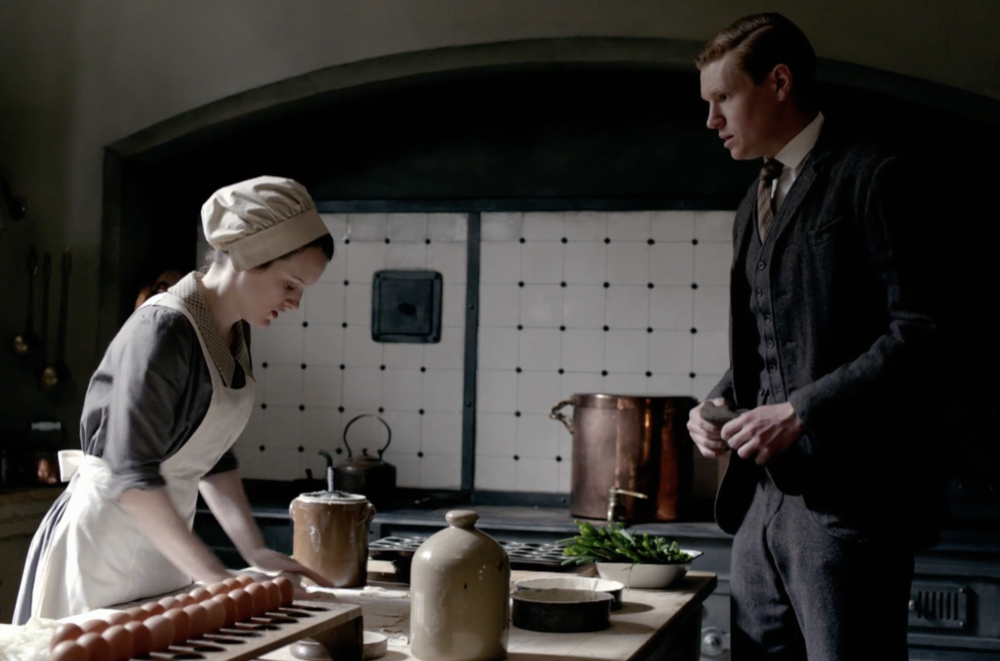 Alfred decided to take a chance and test for the cooking course at the Ritz. Watching him excel in Downton’s kitchen while learning from the staff was delightful. Daisy is distraught when he is accepted and goes off on Ivy, blaming her for breaking his heart and driving him away. Before he leaves, though, Alfred finally comes out and tells Daisy that there was never any chance of anything happening between them. She takes it well and seems grateful. I certainly was. He really could have done that earlier and saved everyone a lot of stress, particularly Mrs. Patmore, who had to mediate the drama between her young employees. This episode also revealed Jimmy to be a bigger hater and bigger jerk than I thought.

Upstairs, Tom and Isobel are again feeling like outsiders and worried about their place in the family. Isobel is pouring herself into her causes and seems to have turned a corner in her grief over her son’s death. I loved the back and forth between her and Violet in these episodes. Their relationship is still one of the most heartwarming in the series. Tom is thinking about emigrating to America to start a new life with his daughter away from the confusing class issues they will both eventually face at Downton. The family is against this, of course, but it’s Isobel who gets him to stop and think before doing anything impulsive. We all know how much Tom loves doing things without thinking about the consequences of his actions, so this was no small feat. 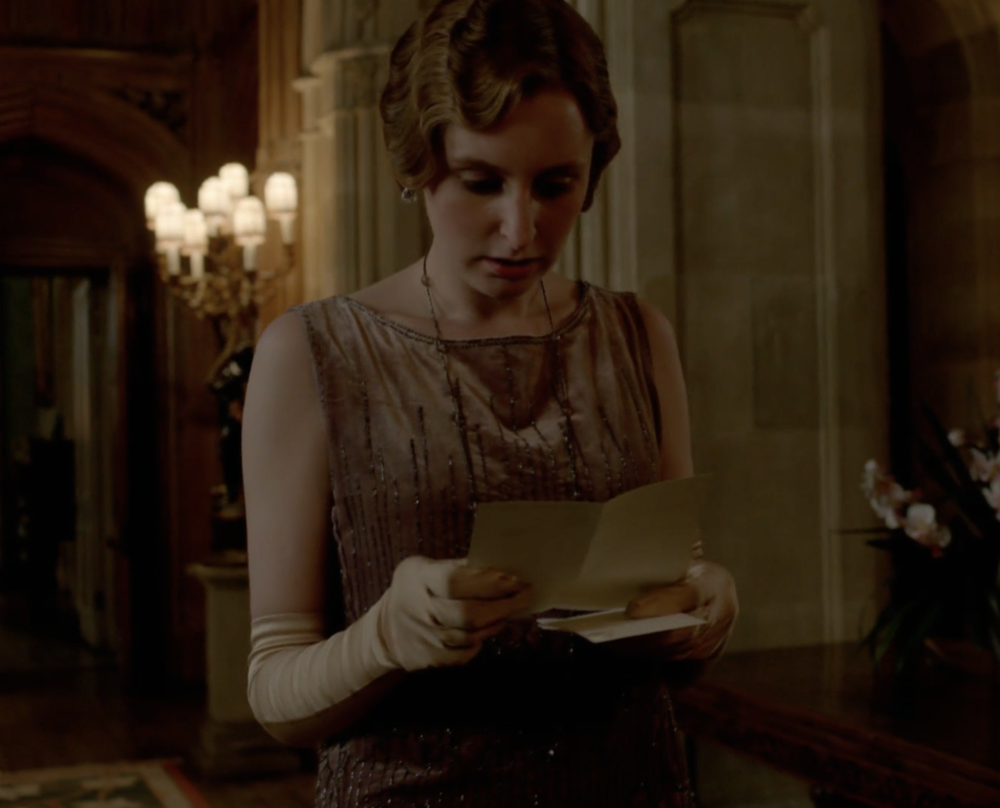 Edith is being punished for spending the night with her boyfriend by becoming pregnant. Also, her soon-to-be fiancé is missing in Munich! Mary is about to fall in love with another man she can’t stand and probably about to reject another man who isn’t negging her. Good for Mary?

This week’s highlight was my inability to tell whether or not Robert James-Collier was wearing a wig. Am I going crazy? Find out what’s going on with Thomas’s hair Friday at 7 p.m., or binge on that inky luxuriousness right now with GPB Passport.