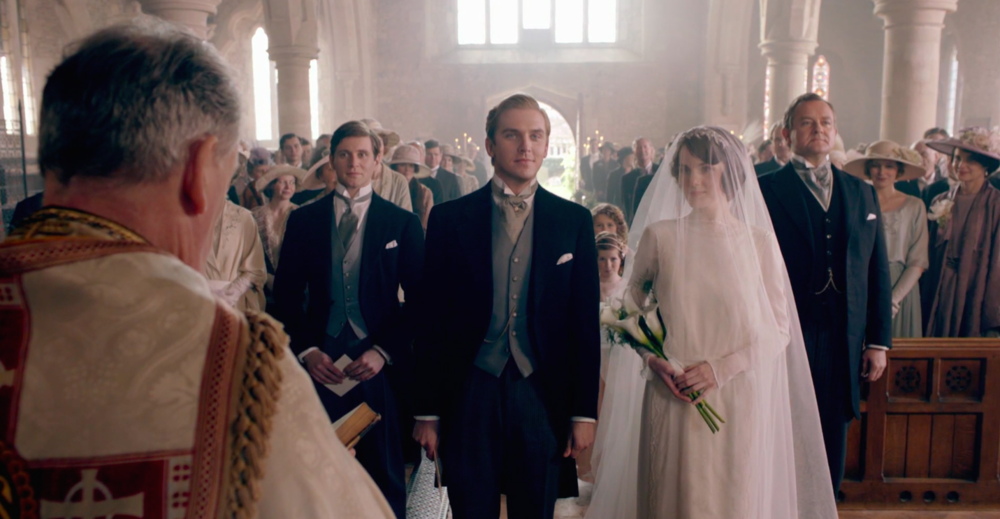 In this episode, Violet insists “Family must never be a topic of conversation,” but that’s why, week after week (or hour after hour if you’re bingeing the show on GPB Passport) we’re here, drink of choice in hand, reliving our favorite moments of the Crawley family and staff. And as far as memorable, joyful moments on Downton Abbey go, the Season 3 premiere ranks highly as one of the best, or at least feel-good, episodes the show ever had (Bates and Anna aside. Always, Bates and Anna aside). 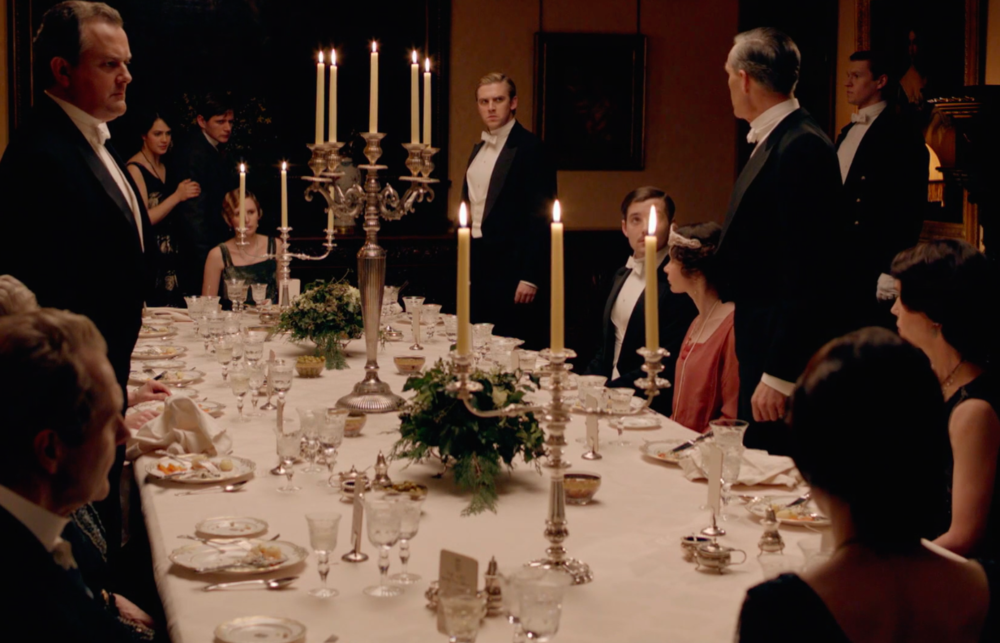 It’s not a Downton wedding if some drama hasn’t transpired to threaten it from taking place entirely. While Sybil and Tom’s unfolded at the end of Season 2, their choices come back to haunt the family (well, mostly Robert) at the beginning of this episode. I appreciate the various introductions this part of the storyline makes: from the beginning of Tom’s transformation into becoming part of the upstairs family (even Violet assures him he’s family now) to the introduction of Lord Merton and his sons, characters who become part of the Downton family as the show progresses. But it’s Matthew’s actions that truly shine, from insisting he’ll not only stick by Tom while the rest of the family and their friends at best can’t understand him and at worst, wish he’d never married Sybil, to making him his Best Man at the wedding. An assignment that Tom is thankful for, enough to stand being fitted for a morning coat (Violet’s dressing-down of him in this scene is priceless) and help with patching up things with Mary and Matthew the night before the wedding, leading to one of the sweetest scenes between the couple.

Though, like every other time I rewatch this episode, I find myself wondering the following: when Mary and Matthew share their blind kiss the night before the wedding, as they’re adhering to tradition to not seeing each other 24 hours before the ceremony, did Mary opening her eyes at the end signal that a happy ending would never come to pass? I think it’s deliberate on Michelle Dockery’s part to look at him (though I’d need to look at the Season 3 script book), but it could also be a hidden message from Julian Fellowes and the rest of the Downton team: there are storms ahead, dark times which ultimately will affect each of the Crawley girls deeply starting next week. 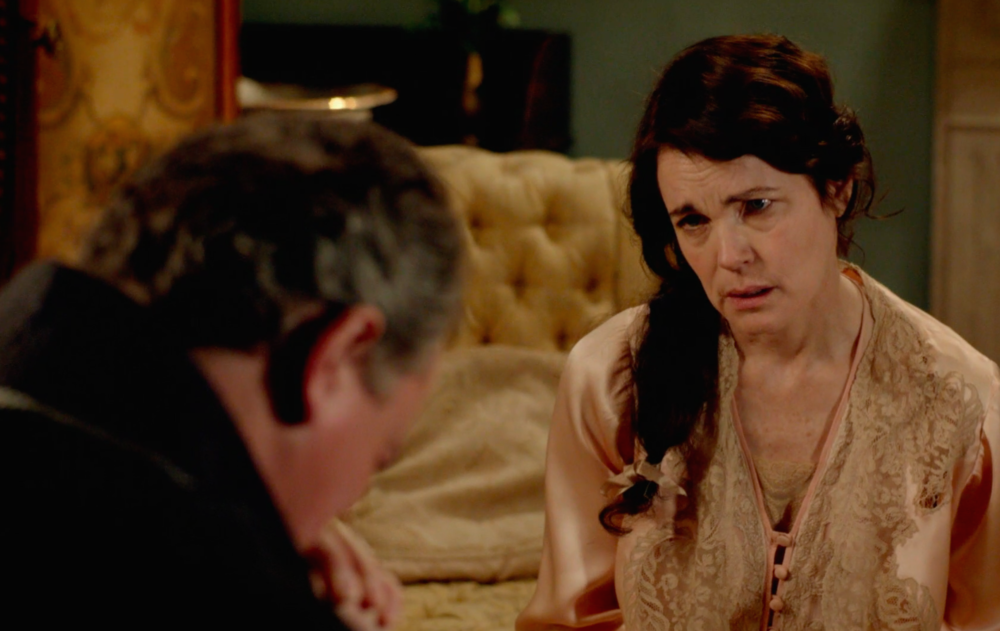 But dark times are already here for Robert, who made the crucial mistake of not listening to his financial advisers and invested heavily into a volatile business: Canadian railways. It turns out you can lose out on an investment if you put your wife’s entire fortune into it. Robert Crawley is a character that continues to surprise me on this show: when I first watched it, I expected him to be consistently snobby and unable to feel or fail (though Lord Sinderby fulfills this trope much later!). And yet he ends up supporting his family and staff through their unconventional choices and mishaps before finally suffering from his own, and the admittance of his failure in front of Cora remains a powerful scene with every rewatch. And yet despite it all, they resolve to stick together and make the best out of a terrible situation, no matter what Mary and Violet have to say about it. 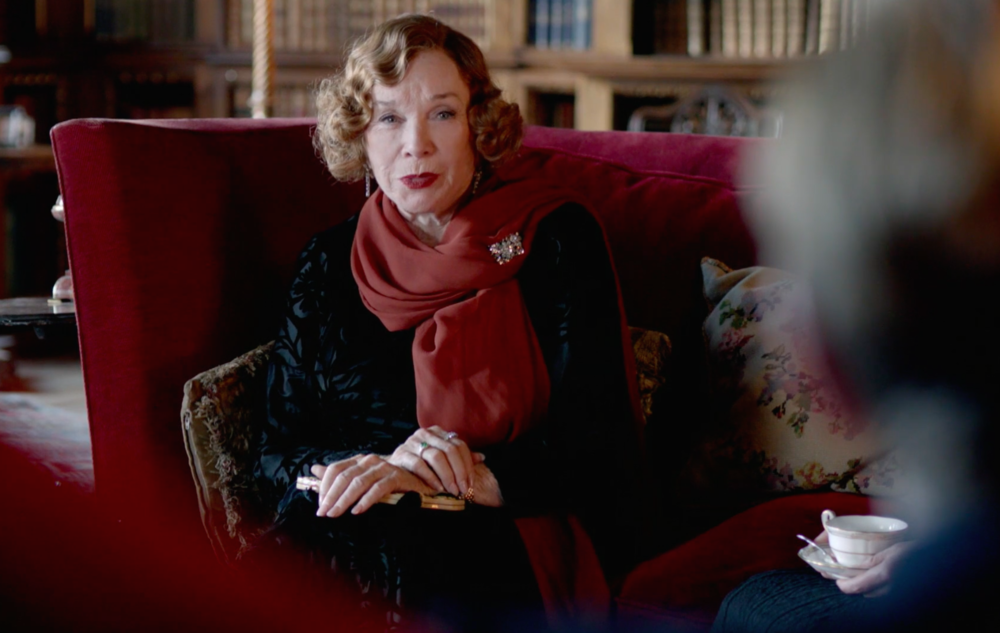 And do they have a lot to say about it, mostly towards Martha Levinson, Cora’s mother from across the Atlantic staying at Downton for a long visit. The second half of the episode mostly revolves around their scheme to convince Martha to invest in Downton after Matthew has refused to, resulting in plenty of shared quips between the two matriarchs. By this point of the show for me, Shirley MacLaine’s Martha is a breath of fresh air for Downton: she’s outspoken and forward-thinking without any mind to hold her tongue in the presence of the Crawley family. Stylish, smart, and able to make lemonade out of lemons, it’s all too clear where Cora gets her fighting spirit from. And it’s Martha who might have made a second prediction this week: in her grand plan to save the elaborate dinner, she suggests guests take plates and eat wherever they like all over the house, considering it to be their only chance to explore Downton Abbey. While Robert protests, it is very telling for the future as the Crawley family does exactly that in an attempt to fundraise in the later seasons: they open up the house for tours not for members of the aristocracy, but members of the village. Martha won’t let tradition hold her back from moving forward in her life, but it’ll take time for her British in-laws to embrace that opinion.

Tune in Friday, May 14 at 7 p.m. for Edith’s first attempt down the aisle, Tom and Sybil’s hasty departure from Ireland, and visit to Downton Place. Can’t wait? Catch up on Season 3 right now on GPB Passport.

Alright, everyone! It finally happened, the moment I’ve been waiting for. After all the painful anticipation of season two, Downton Abbey finally gave me what I wanted: an episode without Sir Richard. There was also a wedding and Grandma 2.0 came for that.

Mary and Matthew’s wedding was beautiful, of course, but there was a lot of unpleasantness beforehand. The unpleasantness includes Mary’s dress, which elicited an uncanny valley fight-or-flight response in me. That’s the last I’m going to say about that. 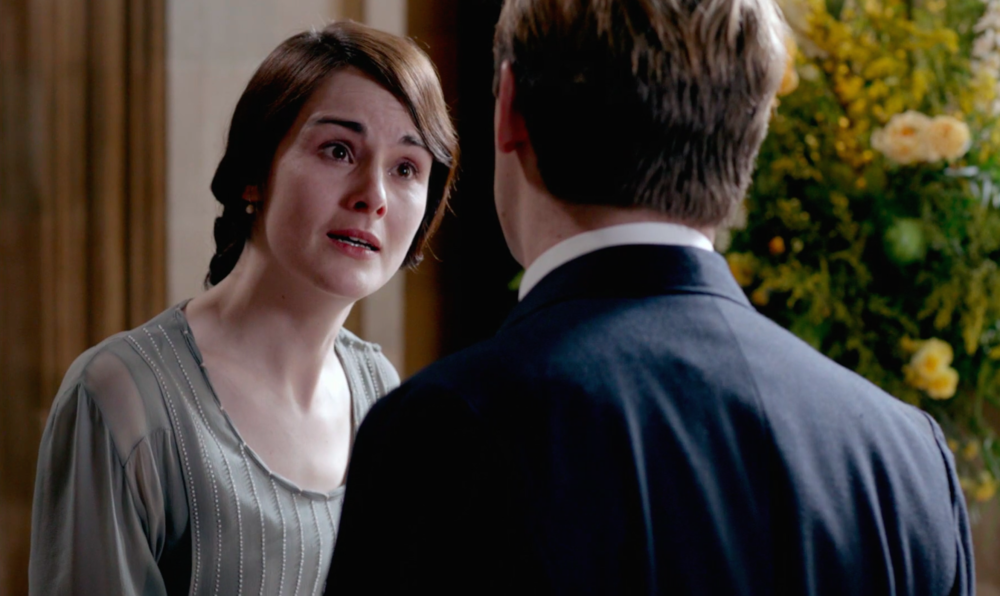 Robert learns early in the season three premiere that he’s lost the bulk of Cora’s fortune with a single bad investment. Cora takes it on the chin, but the news sends Mary and Violet into a tailspin trying to figure out how they’re going to save the estate. Meanwhile, Matthew hilariously inherits a great deal of money from Reggie Swire... or does he?

Yeah, he does. Unfortunately, Lavinia’s Curse (aka Matthew’s guilt) prevents him from accepting this miraculous windfall, in spite of the fact that his in-laws face financial ruin. Mary is not at all amused but eventually stuffs her rage into the place in her mind where she keeps rage and decides to work with Violet to razzle-dazzle their way into Martha Levinson’s deep American pockets. 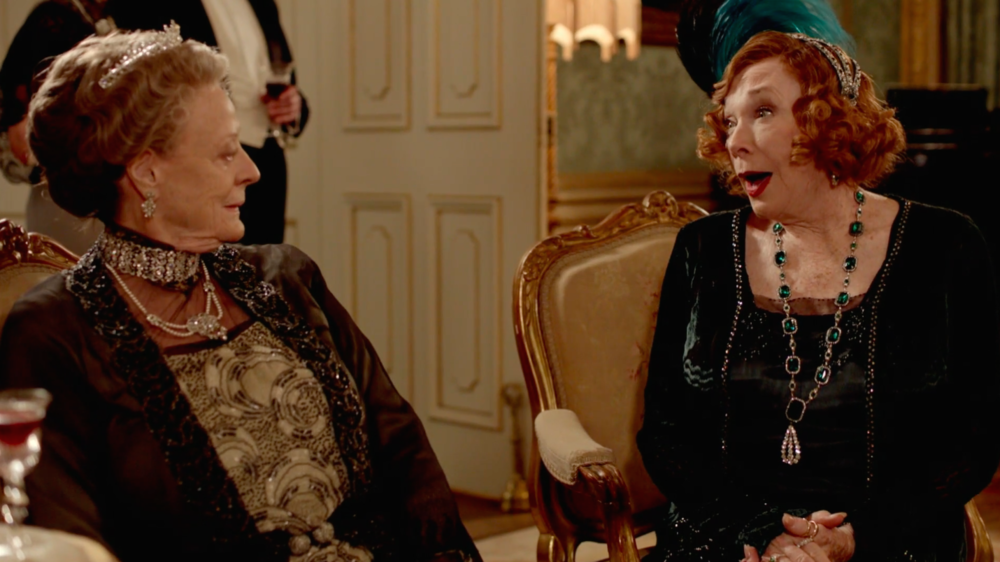 Thoroughly Modern Mee-maw is played brilliantly by legendary actress Shirley MacLaine and the scenes where she went head-to-head with Violet, rich lady-style, had me in stitches. I understood that Maggie Smith’s performance made her a sort-of-breakout star of the series (we commissioned a cake in her likeness), but this episode truly made me realize what an amazing performance she gave. What an absolute treasure.

Despite Robert’s reluctance to have them there, a pregnant Sybil and Tom turn up for the wedding, aided by Violet. Tom’s nervousness manifests itself as incredibly uncomfortable conversations about politics over dinner. The last incident, where things get truly spicy, turns out to have been caused by a salty ex of Sybil slipping him a mickey. In a touching display of solidarity, the entire family (including Sir Anthony) stands up for him, with Matthew even asking him to serve as the best man. Many of the things that have happened on the show, and in this episode, are attributed to the chaos of war upending the social order. I think the character shown in scenes like this disprove that some. 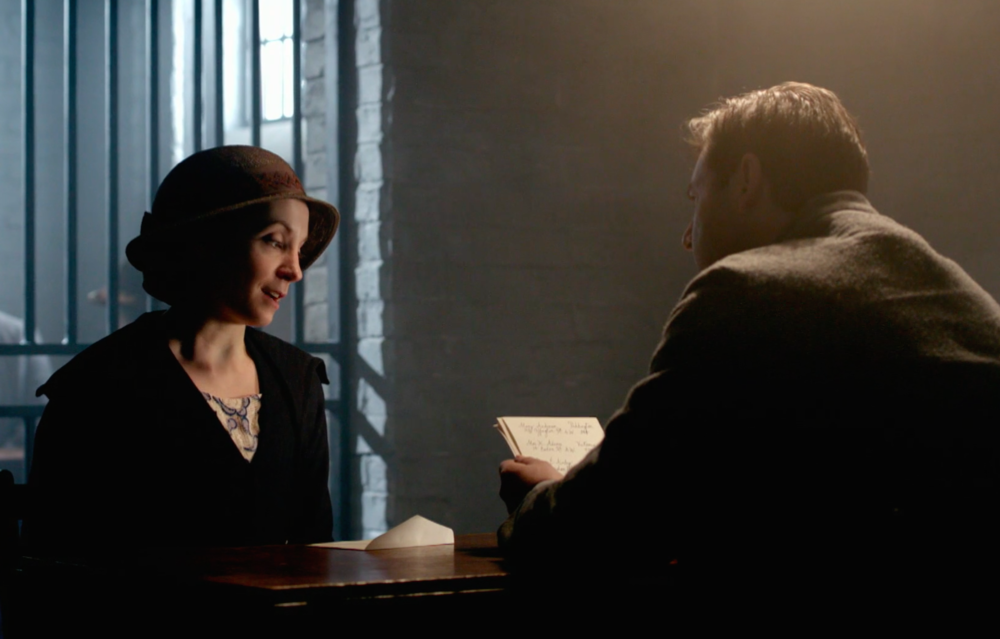 Anna is on the case.

Meanwhile, downstairs, Mrs. Hughes is supported through a truly terrifying health scare by Mrs. Patmore. Both are simultaneously trying to keep the house running smoothly as the coffers run dry and I know it would have been too sad for me to bear if she’d not had at least one person to confide in.

Elsewhere, Anna is paying frequent visits to her incarcerated husband and making serious inquiries into the circumstances surrounding Vera’s death to get him released. And I know that she will succeed and that they will be reunited because I truly believe Julian Fellowes would never break my heart that way, despite Rachel’s many ominous warnings. 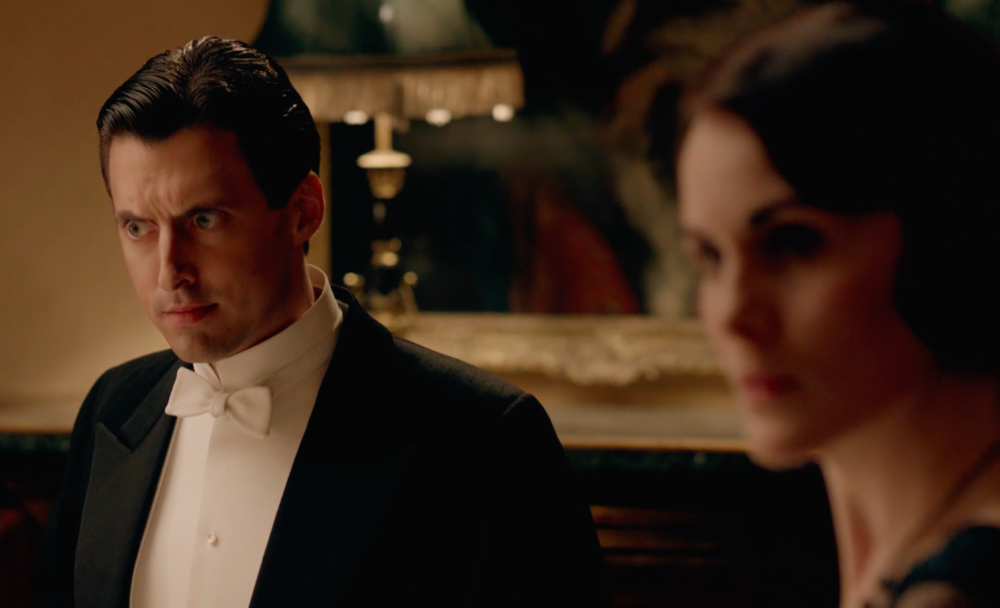 Highlights from this episode include the great shirt heist of 1920, every scene with Violet and Martha, and that one guy’s I-don't-know-anything-about-a-spiked-drink face. Tune in Friday at 7 p.m. as season three continues and stream all the Downton Abbey you can handle right now with GPB Passport.

END_OF_DOCUMENT_TOKEN_TO_BE_REPLACED 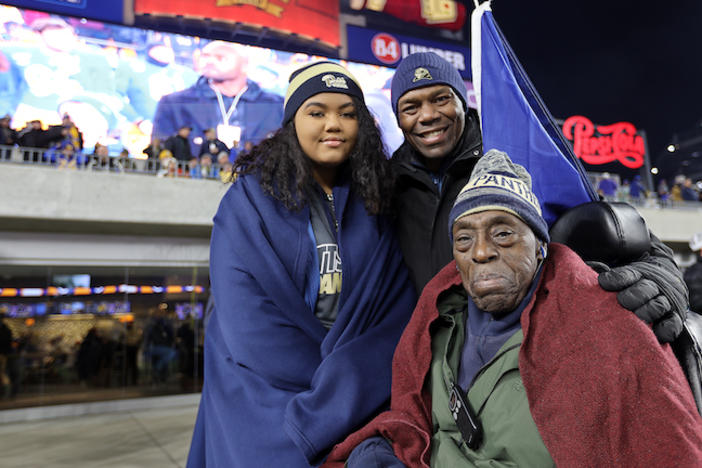