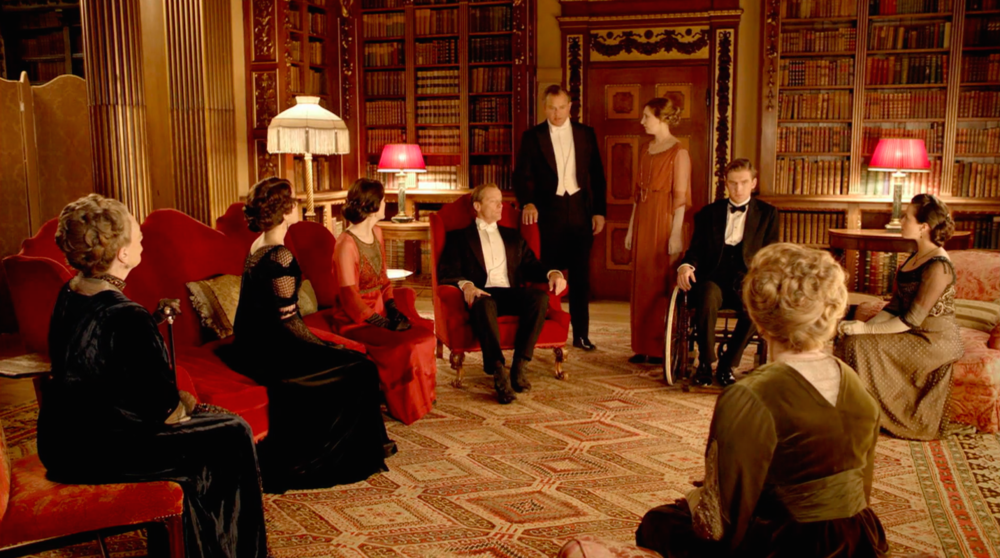 Lord Grantham and Edith break the news about Patrick to the family.

Do you ever wonder at which point when you started watching/becoming immersed in/making your life about Downton Abbey, it became not just a costume drama about a grand home in a quaint little town and more about yelling at your television and writing strongly worded letters to Julian Fellowes and Carnival about ruining your Sunday night/Christmas/week/month/year?

For me, that was midway through Season 3 when Fellowes began killing off my favorite characters, but rewatching the show I feel like I should’ve gotten more up in arms during Season 2 (WILLIAM. Why!? The kindest, sweetest soul on the show!). On the positive side, I think the show did well, and has always done well, showing the horrors of war and the real consequences that stem from it. On the negative side, I’ve never wanted to throttle both Matthew and Daisy as much as I did during these two episodes (and Matthew is/was one of my favorites!). 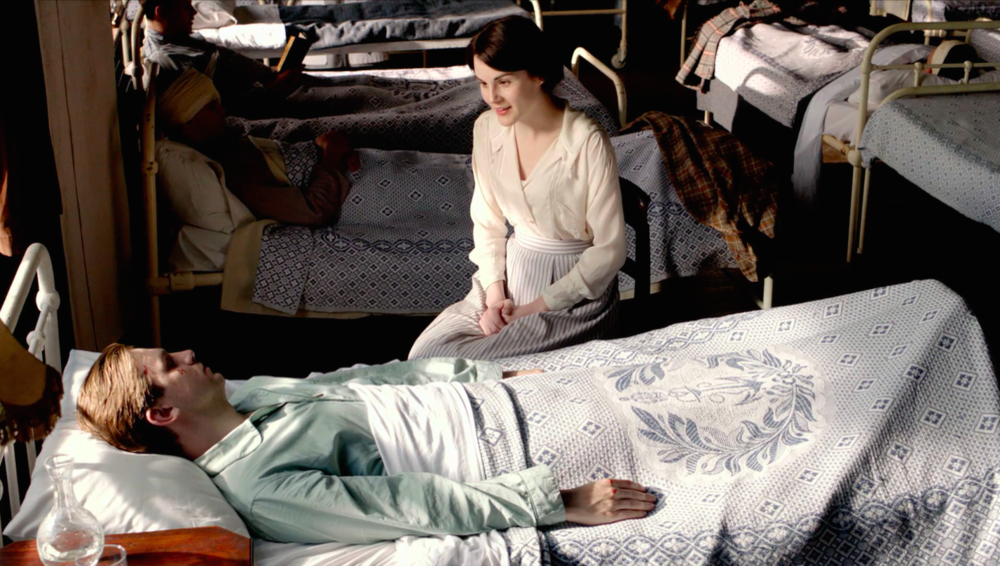 Mary tries to avoid breaking the news to Matthew.

For two people of very different backgrounds and social standings, both of them are suffering through some of the most horrific traumas of the war. But while I get the feeling that Matthew’s sense of pride is shot alongside his ability to use his legs, the fact he’s so resistant to Lavinia (or really, anyone)’s help besides Mary’s grates on my nerves now far more than it did when I first watched this show. I envy those who are watching the show for the first time, or can watch these episodes of Matthew and Mary’s interactions and only see the growing affections between them. But mostly, I just watch and want Matthew to accept help, and love, from everyone who wants to do so. Daisy gives me similar problems: she’s caught in what she perceives to be a moral dilemma of not being romantically in love with William, but everyone knows he’s going to die from his wounds and it’s better not to do it with a broken heart. But she marries him mostly only thinking of her own heart, complaining all the way until his final heartbreaking scene. If I felt she’d turned a corner by that point I’d be a little less annoyed by her behavior, but even after his death, she thinks she doesn’t deserve help, or a family in Mr. Mason.

Daisy, William is trying to help you, and his own family, in the long term. Do it for your friend, romance aside!

On the upside, I loved seeing Violet interfere with the hospital this episode, from insisting to Dr. Clarkson that William needed to be brought back to Downton to her scene with Edith and the telephone. Which, in 2021, still has me nodding and going “SAME.” when she asks if the phone is an instrument of communication or torture (texts and emails > phone calls. Especially spam phone calls!). Maybe this blog needs a running list of quotes just as applicable today as they were 100+ years ago?

But among the continued Anna and Bates drama (as expected, proclaiming their happiness jinxed it), Ethel’s burden (we all knew this was coming), and Mary’s blackmail from Carlisle (even before the blackmail, did anyone like him? Anyone?), the big question in this week’s episodes is the following: Was Patrick Gordon the real Patrick Crawley? 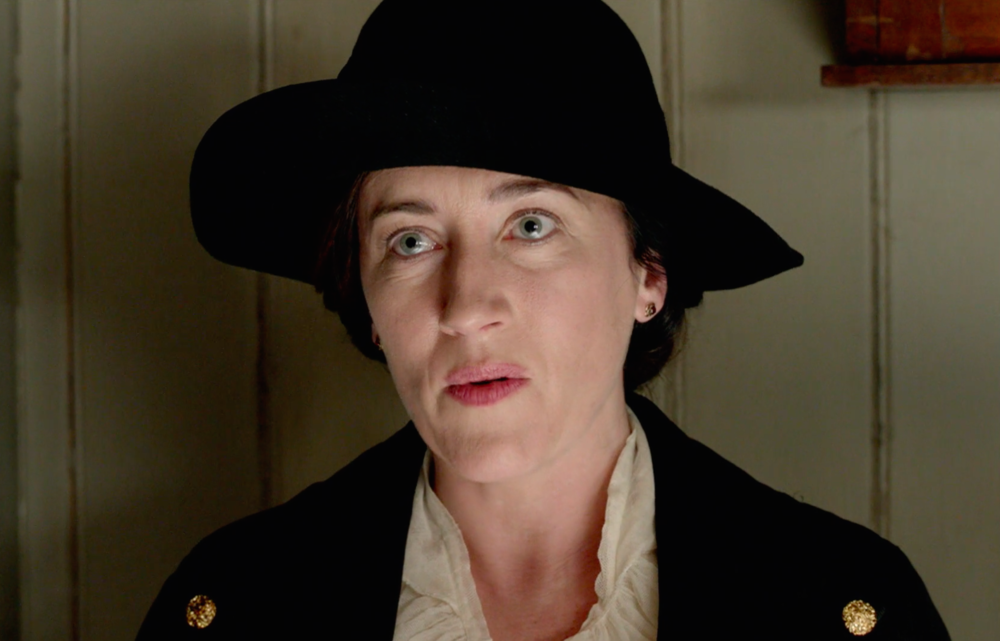 I remember when this episode originally aired and, beyond the death of Vera Bates, it was all anyone could talk about and opinions seemed to be fairly split: some viewers took the sentimental route and believed the soldier’s story while others were certain he was impersonating either a dead friend or someone he’d simply heard about in order to come into a large amount of money. Over the years, my personal opinion has changed from believing he was a Crawley to believing he was an imposter, but this time around I tried to pay attention to both his words and mannerisms in all of his interactions and I think I’ve come to a middle ground: While I don’t think he was truly Patrick Crawley, I do think he did grow to care for Edith in some way, or at least appreciate her kindness and confidence in him. 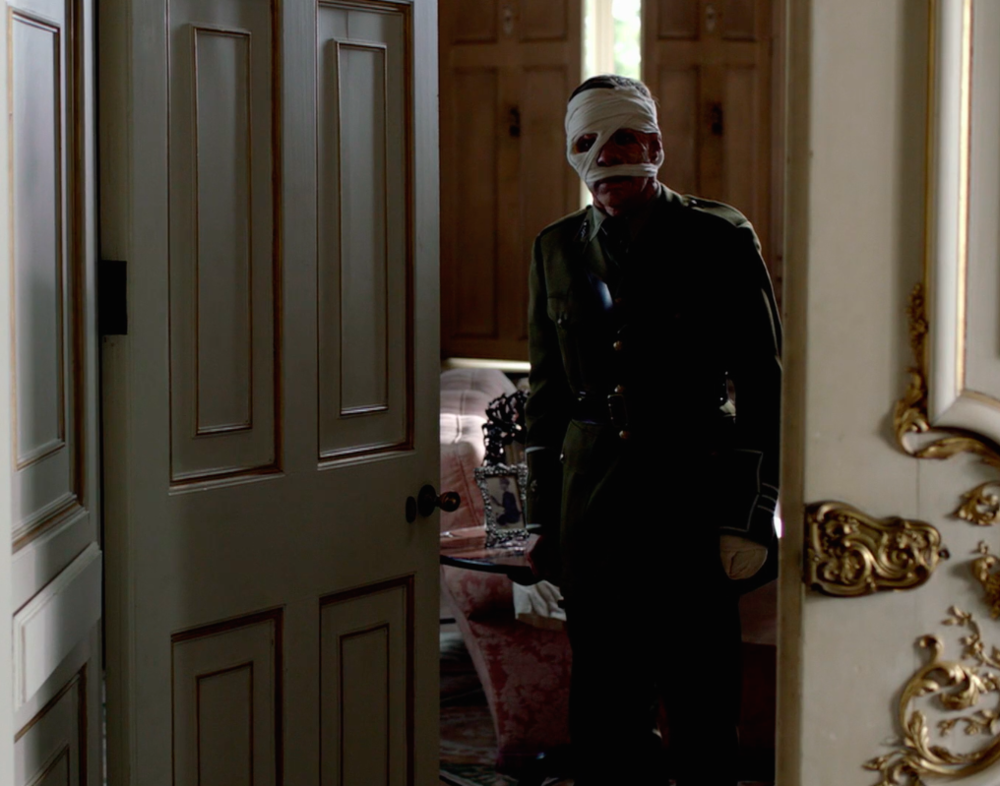 Edith opens the door for her Mystery Date.

Thinking of the show in a wider context, of course, there was no chance of someone new sweeping in to inherit Downton: since the show’s inception, it’s been building the Matthew, and subsequently, Matthew and Mary, storyline, and bringing Patrick back would have been a large pill to swallow and likely would have annoyed many fans (Fellowes took care of angering most of the fanbase in seasons 3 and 4 instead!). But what stands out to me in this episode is how angry Patrick Gordon/Crawley becomes when Edith breaks it to him that his ‘family’ would not recognize him. In my opinion, I feel like someone in that position would have been more disappointed rather than angered, unless they were intent on getting something out of the arrangement. Nevertheless, his inability to say goodbye to Edith properly, leaving her a letter instead, is cowardly but could also show complicated feelings towards her. Of course, it could also show how his plan had failed and he needed to make a swift exit.

Speaking of swift exits, I’m hoping none of them will happen in the newly announced sequel film, Downton Abbey 2! It was announced this week on The Today Show that Downton Abbey is getting a second film and new additions to the cast, including Hugh Dancy, Laura Haddock, Nathalie Baye, and Dominic West (whom you may recognize as Jean Valjean in Les Misérables on Masterpiece. The new movie is slated to come out Christmas 2021, and like all longtime Downton fans, I think we’re all happy to see our favorite home and characters again, and hoping Julian Fellowes does not ruin Christmas with another depressing Christmas special (I’m looking at you, Season 3).

Can’t wait to catch up on the rest of Season 2 so you can celebrate and cry right along with the cast? You can stream all of Downton Abbey right now on GPB Passport. 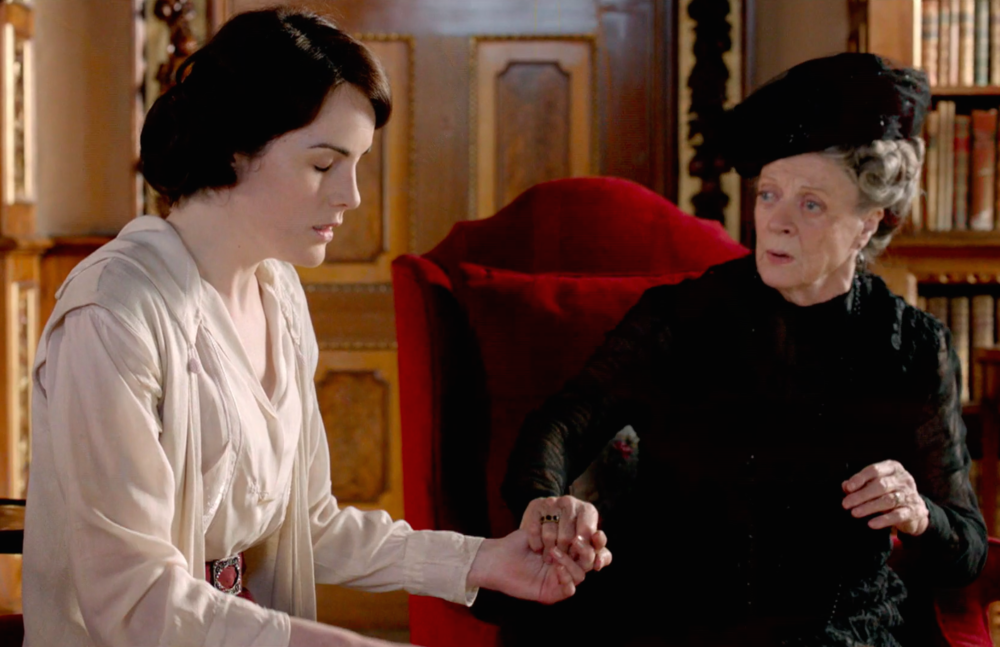 Mary senses a disturbance in the Force.

In the opening scenes of episode 204, we learn that Daisy and Mary possess the shining, at least to a great enough degree to sense both William and Matthew being very seriously injured. While there’s some confusion at first, Matthew is soon transferred to Hospital House, followed shortly by William (after some rich-people-wrangling by Violet). There is a lot to unpack and it is all relentlessly terrible.

Good news first; Matthew is not going to die! He is probably paralyzed, though, and will likely be unable to father any children. Hoping to spare his fiancée Lavinia the grim future he imagines for them, he breaks their engagement and sends her away. Sir Richard and Cora see Mary sliding into that gap and decide that, no, Matthew was just being dramatic, and bring Lavinia back to Downton. To be honest, Matthew's ultimate fate is about the one thing I remember from when Downton Abbey first aired and it's been difficult to know how to react to anything that happens to him or to Mary. 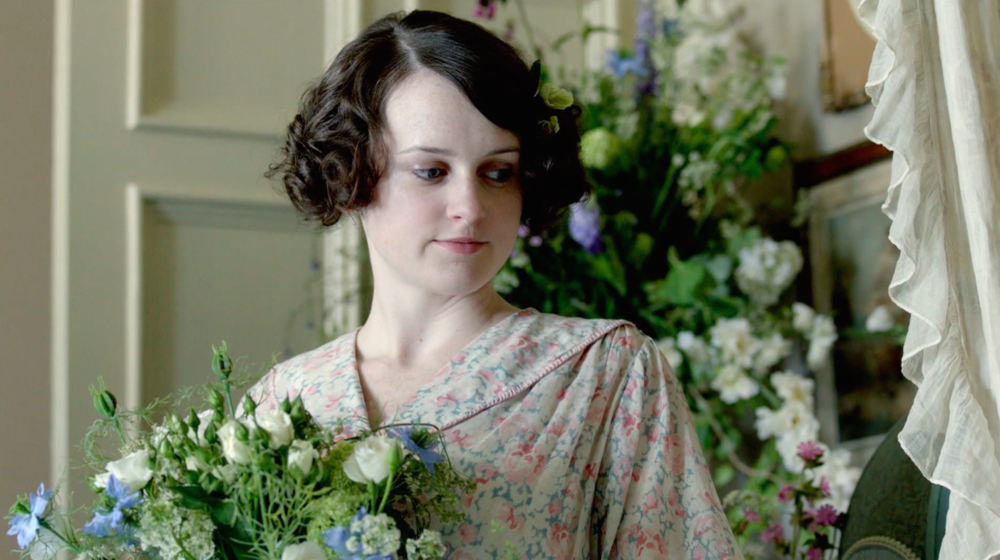 This is so sad Alexa play "How to Disappear Completely." (I resurrected this dead meme in honor of Cousin Patrick.)

William looks like a little bedridden angel but his lungs are destroyed and he is, in fact, dying and it is very confusing for everyone. He realizes this and wants Daisy to marry him immediately. She does not want to marry William but is strong-armed into it in the same way that she was strong-armed into their engagement and I truly did not understand how this spiraled so wildly out of control. At the end of the day, Daisy was never in control and I have been furious for her this entire season.

Speaking of rage, Vera is back. She's still evil. I don't know if they've established why yet but I'm sure it's coming. Wait... nope, I guess not. Anyhow, her reappearance causes Mary to spill the beans about the scandal Vera is holding over her family’s head to Sir Richard, hoping that he will be able to “catch and kill” the story before it ruins them. He does this, and quickly uses the scandal himself to issue some very succinct and terrifying pre-marital threats. Who could have seen this coming?

Meanwhile, Mrs. Hughes has her hands full with women and children. One absolutely massive child belongs to Ethel, who has predictably been abandoned by Major Bryant. She does her best to secure some kind of support for Ethel, but Bryant dies before the war ends and wanted nothing to do with Ethel or their giant baby. 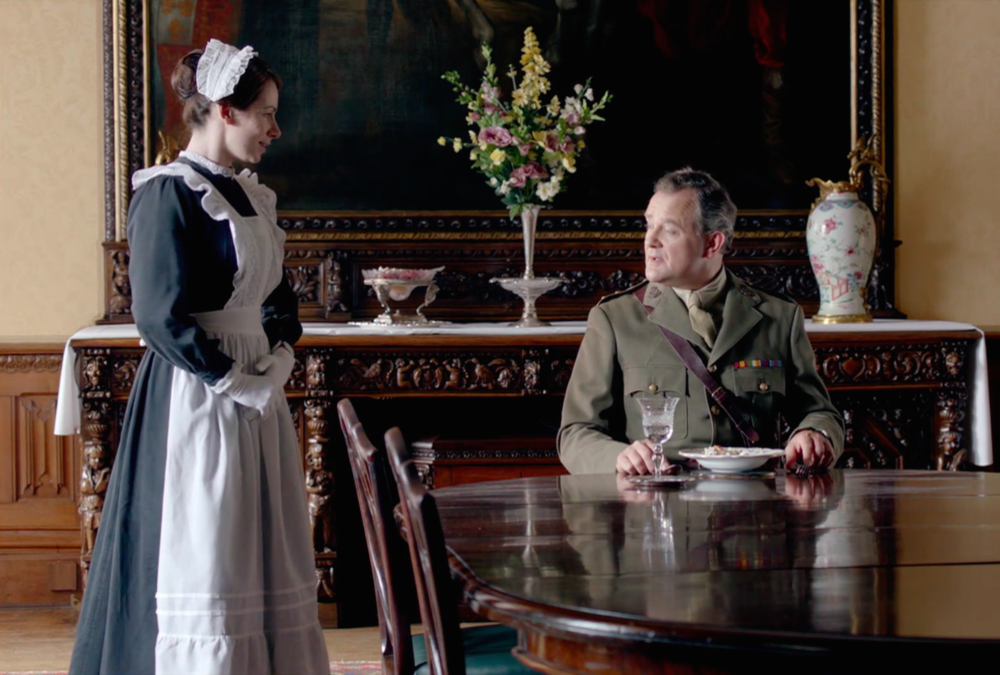 What's all this then?

Then there’s the widow Jane, hired to replace Ethel. After a lot of handwringing by Mrs. Hughes and Mr. Carson, she settles in at Downton and strikes up an unlikely friendship with Lord Grantham. The two make very obvious googly-eyes at each other from time to time and I fear there’s trouble on the horizon.

Lastly, I have to mention the very strange resurrection of Cousin Patrick... maybe. He appears at Hospital House as a former amnesiac Canadian major who has been terribly disfigured and has a Canadian accent and is very angry that no one recognizes him and that they don’t immediately hand him the keys to the estate. Edith, who was in love with Patrick before he died on the Titanic, is the only one who believes his story, but he vanishes. I can see Cousin Patrick popping up again somewhere down the line, I can also see this plot thread being neatly swept under a rug. I’ve decided not to think about it.

Highlights from episodes 204 and 205 include this quote and only this quote, spoken by Lord Grantham to his wife: “So you summon Lavinia? To be sacrificed like some later-day Iphigenia, doomed to push his chair through all eternity?” Tune in Friday at 7 p.m. and stream all the Downton Abbey your heart desires right now on GPB Passport.