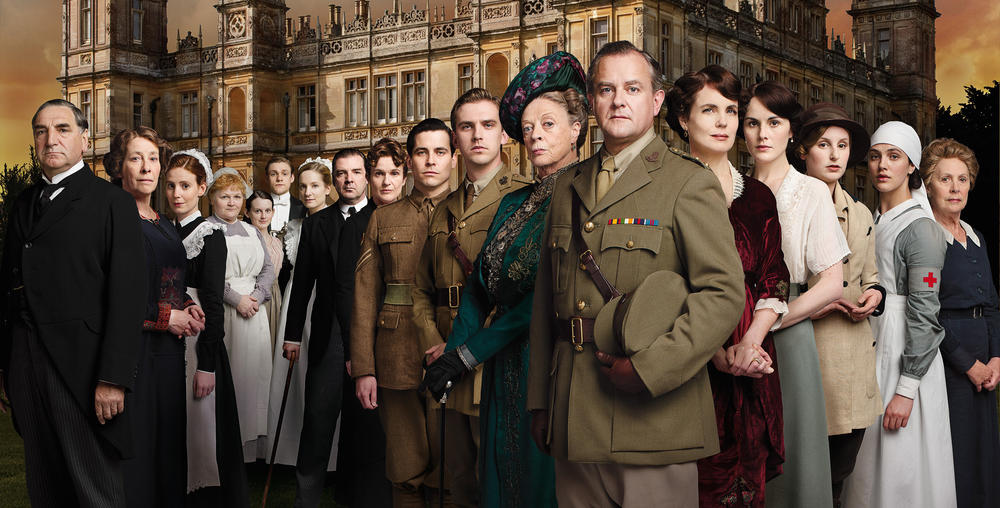 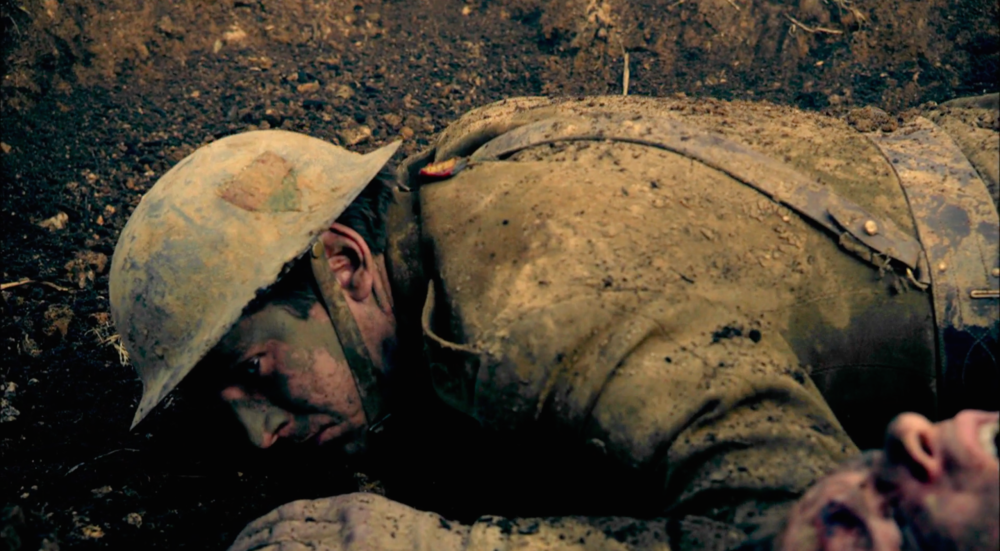 An explosive opening for season 2.

We’ve made it to Season 2 and it starts off with a bang! Quite literally, as we’re thrown into Matthew’s experience at the Battle of the Somme. Rewatching the show, it feels like out of all of the seasons, Season 2 expanded the world of Downton Abbey and all of its respective changes and developments more than ever. Of course, it’s easy to believe that an international war would allow that, but it’s such a stark change from Matthew bidding Mary farewell at a Downton garden party and reappearing in the midst of battle. He says it himself even before our favorite title credits: “When I think of my life at Downton, it seems like another world.”

But even Downton has started to transform into another world, a new normal as World War I’s influence is neither lost on the village nor the Abbey. And with it, it’s brought all the best things a new season of a British historical drama should offer: new faces, new loves, and new heartbreaks. Not even Mr. Carson is spared, as Mrs. Hughes famously predicts that unless he eases up a bit, he’ll give himself a heart attack. When I watched this scene and the resulting health scare play out the first few times, I remember it was far more stressful to watch and pray Mr. Carson made it through (both the heart attack and the later bout of Spanish Flu). But coming back to Downton Abbey as a comfort show in the time of COVID-19 quarantine has me laughing at Mrs. Hughes’ keen instincts instead: I know both of them will be okay and eventually find a future together, so instead of worrying about certain beloved characters, I find it easier to take solace in some of the humorous bits of this episode instead.

Plenty of which revolve around one of the new faces to the show: the new maid, Ethel, whose grand vision for her future earns the ire of most of the Downton staff. But it’s Miss O’Brien in her desire to manipulate and scheme who puts Ethel in her place (at least temporarily). It’s Ethel’s resistance to being content with her lot in life throughout this episode that always hinted for me that her future was yet to be decided, but would come at a difficult price.

But Ethel isn’t the only one hoping for something new: upstairs and downstairs alike, new loves in the form of romantic and professional interests. This episode introduces Edith’s interest in learning to drive, Sybil’s interest in learning to become a nurse, and Mary’s interest in trying to move on from Matthew. All three of them are successful, to a degree. Though where Mary’s concerned, she’s far less able to prosper in her ventures due to Matthew’s return to Downton, with his new fiancee Lavinia at his side. 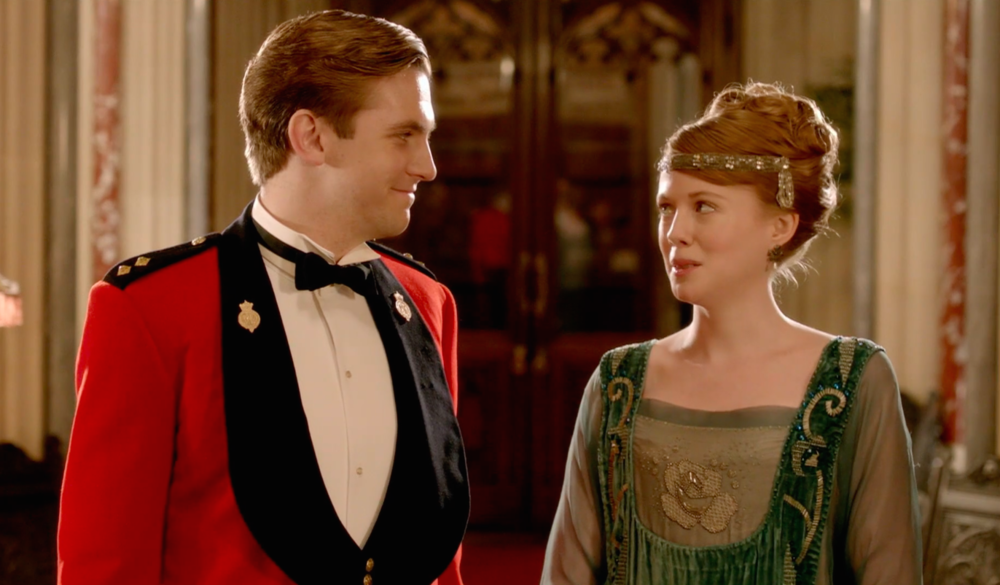 Matthew and Lavinia. She's fine. This is fine.

Naturally, we’re introduced to Lavinia with the Dowager Countess’ skepticism of the young, London-born-and-bred future Countess of Grantham: she’s not pretty enough, she’s not strong enough, but she’s kind, caring, and sweet. No matter how many times I watch Downton, I can’t ever bring myself to outright despise Lavinia Swire, even if she, alongside Matthew and Mary’s joint stubbornness and Sir Richard Carlisle, are the obstacles to the Mary/Matthew romance. I’m glad that Julian Fellowes and the Downton team made this decision: if Lavinia had been despicable (perhaps along the lines of Mrs. Bates?), I think it would have been far more tiresome to watch Mary and Matthew’s journey to find one another again unfold over the course of the season.

Though speaking of Mrs. Bates, there’s few characters on the show whom I despise more than Vera Bates. She’s fun to hate and a giant source of the heartbreaks in Season 2, even if her villainy can seem downright cartoonish each time I watch this season. But I wonder if Anna ends up jinxing herself and John when she insists how happy she is: a feeling that lasts for less than a quarter of the episode and disappears again, thus setting the course for the Anna/Bates romance: as soon as they’re happy, they’ll be miserable for the rest of the current or upcoming season. It is Downton law.

The heartbreaks continue with Sybil and Tom, as the latter confesses his feelings with nothing in reciprocation, William’s enlistment and its effect on the Downton household, Thomas’ inability to hide from the reality of war both at the front and in the Downton village hospital, and Lord Grantham’s disappointment when he isn’t brought into the army properly. It’s the heartbreaks that continue throughout the season and why we watch, for as Matthew puts it: “War has a way of distinguishing between the things that matter and the things that don’t.”

The cast continues to learn what that is for themselves this Friday, April 9 at 7 p.m. with episodes 2 and 3 of Downton Abbey Season 2. But if you’re eager to binge watch all of Downton’s stories as a convalescent home, the outbreak of Spanish Flu, and all of our favorite romances, friendships, and rivalries throughout, you can watch the entire series now on GPB Passport.

As much as I believed I understood the relationship between Bates and Lord Grantham during the war, seeing Matthew and his batman interacting at the beginning of the season 2 premiere was absurd in a way I hadn’t fully absorbed, and I was not ready. Matthew had been one of the show’s most relatable characters for me, as his you-people-really-live-like-this confusion in the first few episodes mirrored my own. I’ve got to be honest, seeing the ease with which he interacted with his... war butler (I guess... I don’t even know) felt a bit like a betrayal. I honestly do try to avoid criticizing the lifestyle of the British aristocracy in every single entry, truly. Alas, I am but a poor millennial and a human being at that.

The episode opens in a trench. World War 1 has begun, and Matthew is in the thick of it. The episode follows Downton’s residents as they try to adjust to the changes brought about by the war and try to find ways to contribute. Matthew is on the front line. And, just as I was getting used to a Thomas-free atmosphere, guess who shows up in the same trench as Matthew? Although, we do get a glimpse of the man behind the mask and genuine human kindness after he excuses himself briefly from tea with Matthew to get himself shot and is sent to the crowded village hospital. 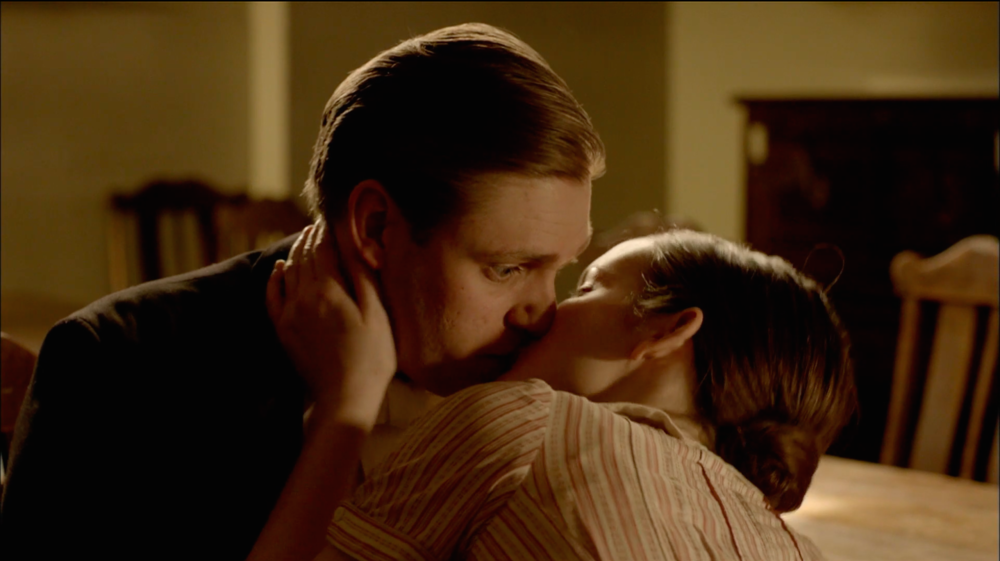 William gets a kiss from his "sweetheart" Daisy.

Back at Downton, Lord Grantham is desperate to fight but ends up seeing himself as some sort of honorary war clown after he’s given a ceremonial leadership position. Meanwhile, Isobel and Dr. Clarkson discover that Violet is behind William and Molesley receiving medical deferments. While William is eager to enlist, Molesley tells the doctor that he is a-okay not doing that, in fact, and that his lungs have seen better days.

While Mary is trying to deal with her heartache after meeting Matthew’s lovely new fiancée, her sisters are trying to “do their bit,” as Violet and Isobel surprisingly agree they should be allowed to do. Sybil gets poor Mrs. Patmore to teach her how to cook before she leaves to train as a nurse. She is useless, of course, but that is not her fault, and she is doing her best. Edith gets Branson to teach her how to drive and decides to help out on a farm, where she proceeds to get super inappropriate with another woman’s husband. Sometimes, when someone did or said something foolish, my father used to say that person “didn’t have the sense God gave a goat.” I think about that phrase a lot when watching Edith Edithing each week. Bless her heart. 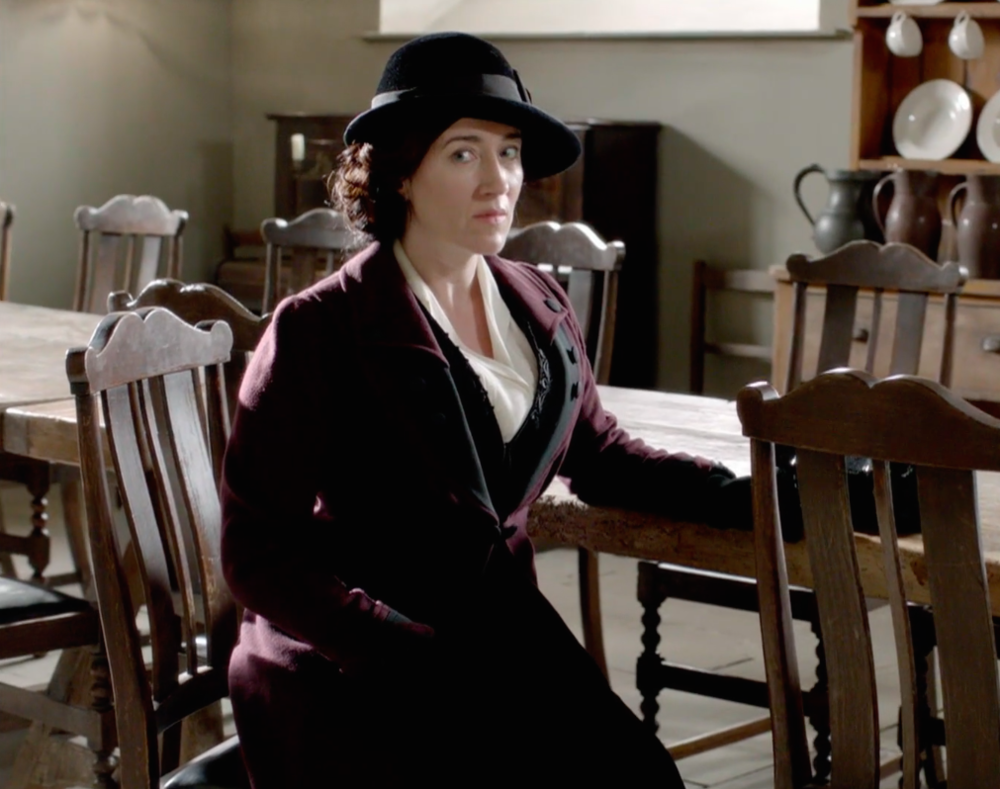 Speaking of complicated relationships, guess who turns up at Downton immediately after Bates proposes to Anna? His wife Vera! Who is a genuinely terrible person! She proceeds to blackmail Bates into leaving with her. After angrily accepting his resignation, Carson lets Lord Grantham know that Bates did not want to resign and did so to protect his family from scandal, but he has not returned by the end of the episode. I vaguely remember a storyline involving Bates being arrested and put on trial for murder and now I think I know who the victim is. I do hope he and Anna get their hotel and babies eventually.

Highlights for this week: They hire a replacement for Gwen who is more or less just Gwen with fewer scruples, down to the red hair. O’Brien puts her on vapor patrol. Molesley wastes no time moving in on Anna after Bates leaves, but she turns him down with the classic, “It’s not you, it’s my moon baby.” Branson confesses his love to Sybil, who replies, “Aww... that’s sweet.” Tune in Friday at 7 p.m. and stream all the Downton Abbey your heart desires on GPB Passport.