We may have met most of the primary cast members in the first episode, but this week was a meeting of character dynamics with long-lasting consequences. At least, this is what I thought of when I rewatched Season 1 Part 2, alongside a few questions regarding historical accuracy and “Wait, Julian Fellowes mentioned this information this early in the show and I’m only now just realizing it?”

For as much as he enjoyed pulling our heartstrings, I feel there’s nothing like Downton Abbey that brings back past references, events, and most importantly, misdeeds, to haunt the cast later on.

But let’s discuss the beginning of some very important character dynamics, starting off with Violet and Isobel. Part 1 gave us insight into what we expect will be a rocky relationship, but we aren’t shown just how tumultuous it is as two matriarchs attempt to verbally duel for the upper hand. It starts with the hospital and the introduction of Doctor Clarkson, and while Violet prefers her authority over the hospital in name only, we’re treated to Isobel getting right into wanting to help with a hands-on approach. Watching this for the first time, I remember cheering Isobel on, but upon the 10th or 12th rewatch? I’m questioning whether Isobel, despite her recommendation of treatment being effective, was acting appropriately when influencing Dr. Clarkson’s hand?

And more importantly: how accurate was dropsy portrayed on Downton, as well as the resulting pericardiocentesis (try repeating that five times fast? I had to look up the correct spelling of this and double-check it)? While Alastair Bruce was the historical advisor to the show (and a guest for one of GPB’s Downton Abbey galas), I was curious as to if the expertise consulted for the show not only extended to table settings and the right way to wear military decorations, but to historically-accurate medical procedures.

So I asked a surgeon (and family member) to watch the draining scene with me and share their commentary. According to them, most of the process is not only accurate to the time period but the same treatment is still being used today, more than 100 years later! They did add that, unlike what’s seen on the show, a full vial of adrenaline likely wouldn’t be needed or used. Dr. Clarkson would have likely only needed a little bit to get the patient’s heart started again. I’ve never really questioned the medical procedures on MASTERPIECE shows before, or at least not since Mercy Street, so this may be a new addition to my part of this blog as we continue the Downton rewatch.

But the second important character dynamic this episode? Mary, particularly with Edith, Matthew, Cora, and Anna. Because this week launched, to me, the plot that first made Downton so very memorable: the fiasco with Mr. Pamuk.

Which should begin with a shoutout to Theo James as Kamal Pamuk. Rewatching Downton with MASTERPIECE-loving family members had them going “Where have I seen the Turkish man before?” and I, like I’m guessing plenty of you, answered that question easily. After his final introduction and goodbye in this episode of Downton, James appears in the MASTERPIECE library again as Sidney Parker, the dashing hero of Sanditon many years later. And before any Sanditon fans ask: no, at this time we do not know if Season 2 will happen.

Part of the fun with MASTERPIECE shows, and British shows in general, is trying to remember where you’ve seen that 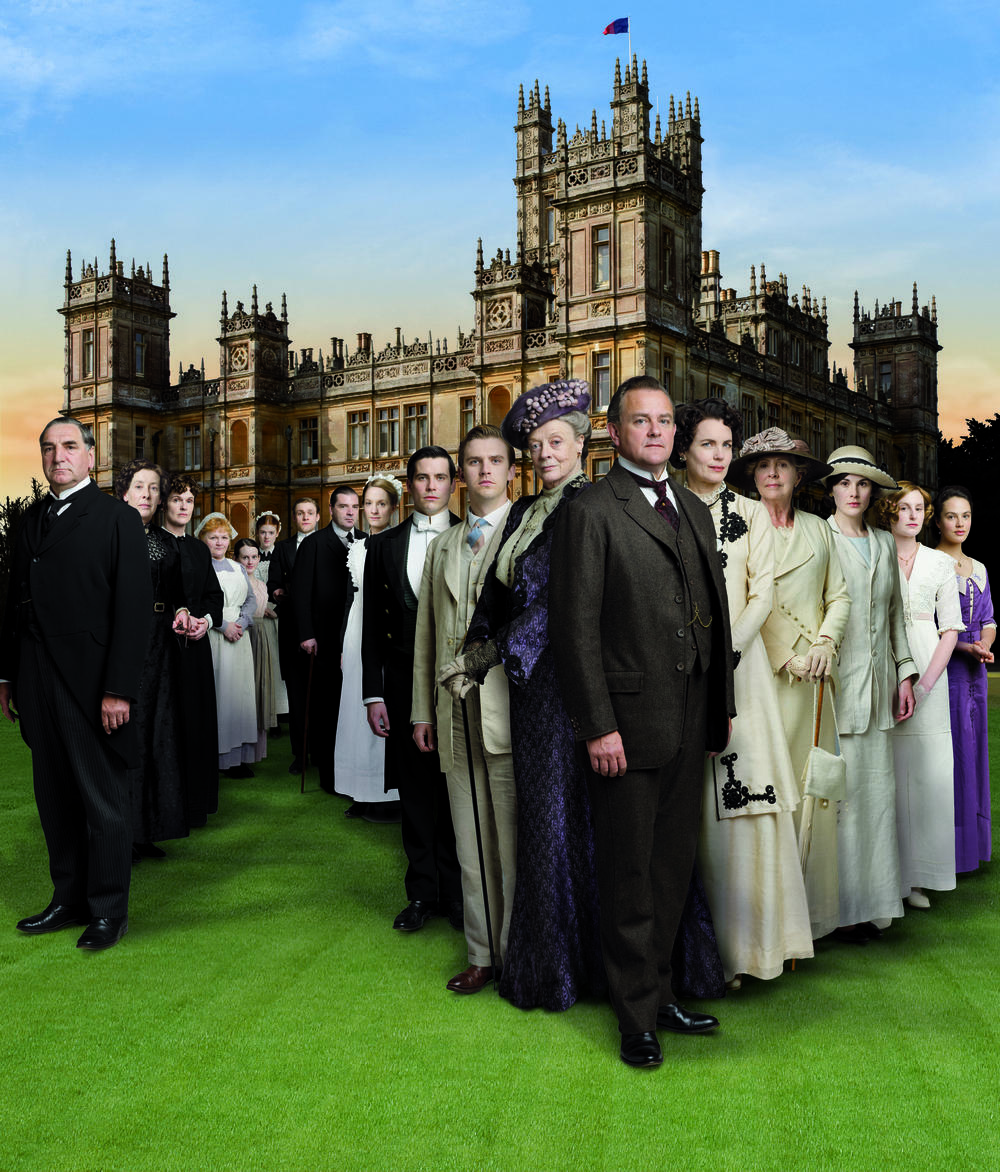 actor before. I feel it would make a lovely game of bingo, with spaces filled in with various shows and you can mark your card if you’ve recognized an actor from what you’re currently watching on one of the listed shows on the card. Or maybe I watch too much MASTERPIECE (don’t answer that unless it’s in the negative, because there’s no such thing)?

But I remember watching the death of Mr. Pamuk (and less importantly, the Perseus and sea monster conversation and how Evelyn Napier spends the entirety of the Downton series being instrumental to the plot and yet utterly forgettable at the same time. Sorry Evelyn), and being dumbfounded that 1. This series was actually going to go there with that level of scandal and 2. It wouldn’t be wrapped up in a tidy bow during the next episode. No, the episode with Mary’s faux-pas would continue not only through seasons 1 and 2, but be referenced even further down the line, such as in future Mary and Edith spats. But most surprisingly? It took this rewatch, which is about my 12th or so rewatch of the show, to recognize the following: the famed della Francesca actually makes its debut in this episode!

Downton fans know that this small painting creates a myriad of problems down the line for Robert and Cora (and the excellent scene of Robert punching his ‘rival,’ if he really ever was, in the face), but it’s also a factor into Mary’s own troubles as that’s what she and Mr. Pamuk are studying before the latter goes in for the scandalous kiss that inspires the even more scandalous rendez-vous in her bedroom. And frankly, I’ve always been too focused on the kiss and the resulting scenes that changed so many lives and impacted the storyline for so long that it’s easy to forget what the events were that led up to it.

In short, I’m pretty sure that painting is cursed and Robert should have gotten rid of it much earlier, despite how valuable it is.

Though in my (very) biased view, the most important part of this episode was the very end. The episode concluded with the introduction of my favorite character or at least my favorite character who spans all six seasons and the film. I’m talking about Tom Branson, of course. Watching his introduction is a happy reminder of how much he changes and develops over the course of Downton Abbey. We know he’ll struggle to find his place and what family truly means to him, but for now, we get Robert’s shocked expression when he finds out that Tom’s literary interests mostly revolve around politics (he was expecting something else far more innocuous, it seemed).

Robert, you have no idea what’s in store for you and your family with the addition of your new chauffeur.

This was certainly an exciting episode! First, I learned there was a pub in town called The Dog and Duck, which sounds like an adorable place to drink, Bates became a cyborg, and the guy from Sanditon made a special guest appearance as a corpse. It was a lot!

Mostly, like last week, I was left with a lot of questions. There is so much that I do not understand. And, knowing that most of these points amount to my just being astounded by the rigidity of the British class system before World War 2, I’m eager to see how the attitudes of the Crawleys and their staff evolve over the course of the series. Especially given that, from what I understand, the main conflict of the series isn’t between any individual characters, but between old and new. Between a group of people whose way of life may not survive the modern age and a future that they cannot prevent or delay.

The animosity between the Dowager Countess and Isobel makes sense. Not only is Isobel’s son set to inherit their home and wealth, but she is also meddling in her business at the hospital and going out of her way to help its patients. She also calls the Dowager Countess out one evening at dinner after she suggests servants should be forced by law to remain servants, “for the common good.” Violet’s disdain for Isobel is obviously inspired, in part, by jealousy. Isobel is on her way to becoming the People’s Choice.

The tension between Matthew and Mary is also understandable for the same reasons. Matthew finds her family’s lifestyle ridiculous, and he doesn’t do a very good job of hiding it. He’s flaunting his disinterest in their world while she is determined to keep it intact, and there doesn’t seem to be anything either of them can do about any of it.

So, while it makes sense that some very wealthy, jobless individuals want to maintain the status quo, the household staff left me scratching my head a few times. It’s O’Brien. It’s always going to be O’Brien, isn’t it?

What is her deal?

She talks about Matthew and his mother like they are absolute trash before she has even met them and seems insulted by the very idea of having to serve them. I don’t get it. Then, she snitches on Gwen for having a typewriter, that she paid for with her own money, and suggests she should be fired for learning how to type and wanting to find a job outside of domestic service. It’s baffling. What does she stand to gain from any of the horrible things she’s said and done?

Outside of people being mean for... reasons, there’s Bates, who bought what turned out to be a torture device from the world’s worst salesman after asking far, far too few questions. He asked two questions, and one of them was “how much?” Shockingly, that turned out to be a bad idea. I’m looking forward to this week’s shenanigans, Friday night at 7 p.m. If you can't wait until then, don't forget that the entire series is available for streaming right now with GPB Passport.