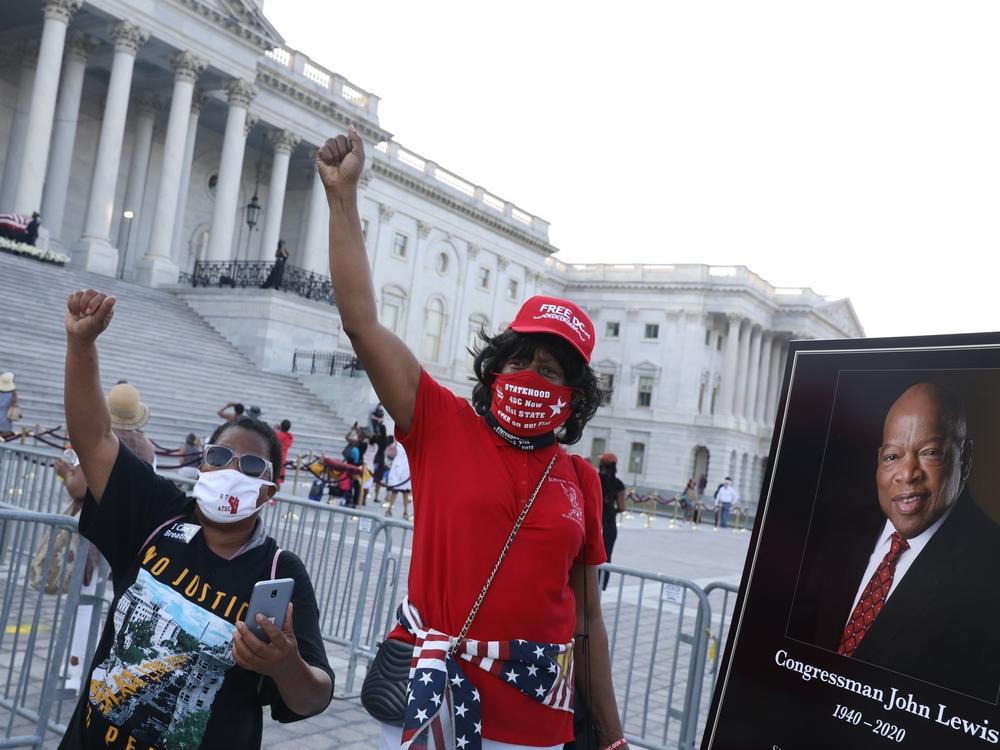 Caption
Members of the public wait in line to pay their respects to the flag-draped casket bearing the remains of Rep. John Lewis (D-GA) at the top of the East Front Steps of the U.S. Capitol.

John Lewis, the civil rights icon and late congressman from Georgia who represented Atlanta for more than three decades, is being honored during his final visit to the U.S. Capitol on Monday.

It's part of a two-day farewell for Lewis, the last surviving speaker from the 1963 March on Washington who would later become revered as "the conscience of the Congress." Lewis died July 17 after battling pancreatic cancer. He was 80. 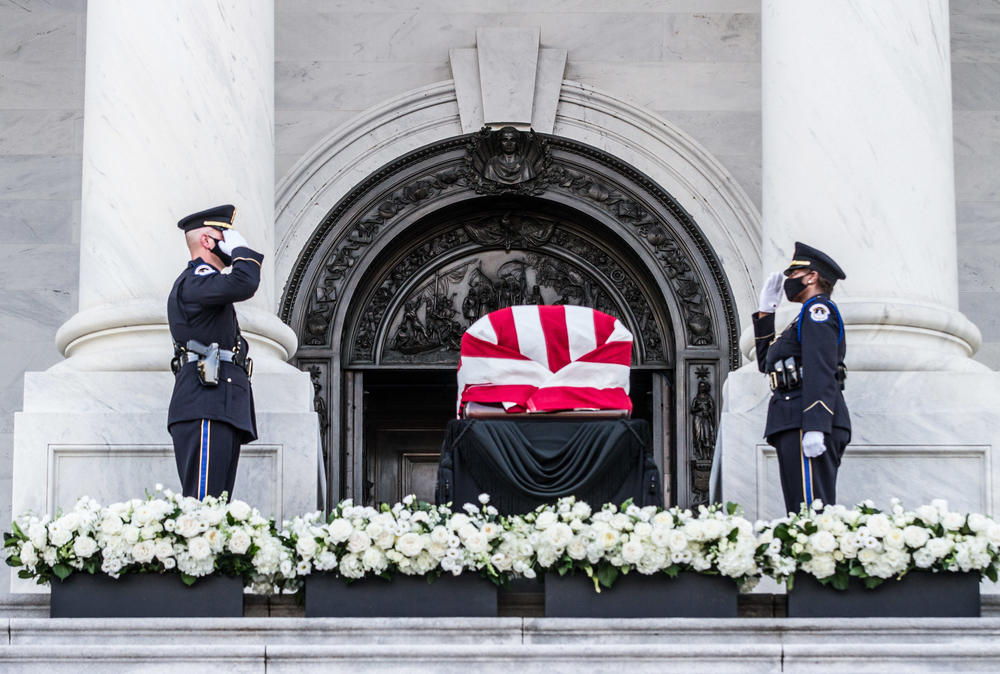 Caption
Rep. John Lewis (D-GA) remains are bought out for the public viewing. 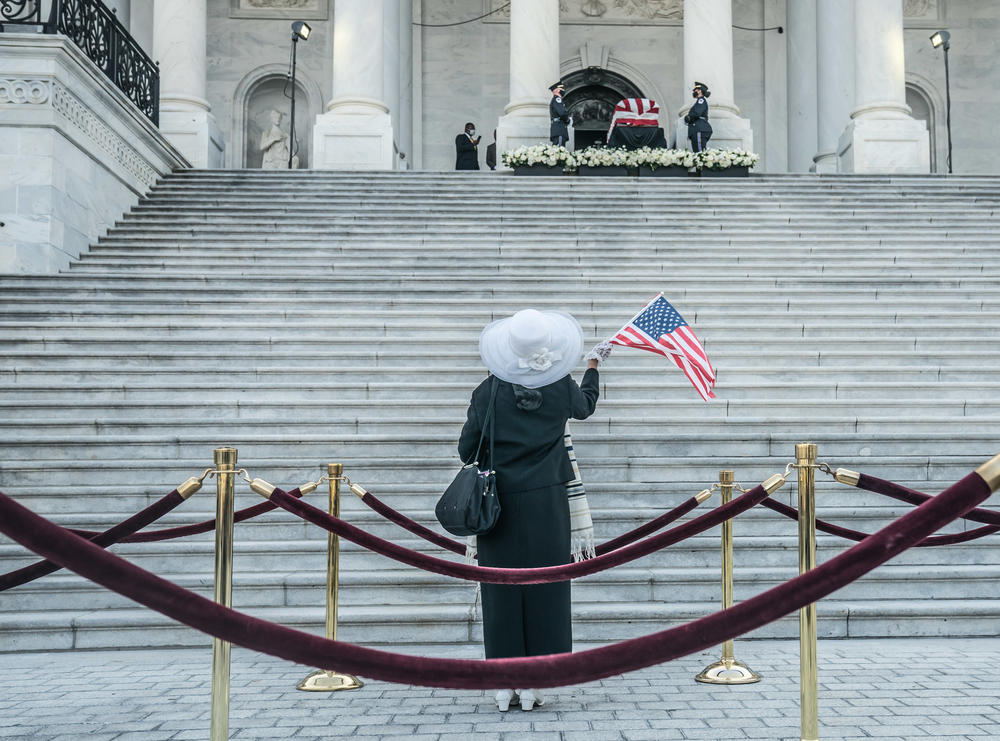 Caption
A mourner waves a flag as Rep. John Lewis (D-GA) remains are bought out for the public viewing. 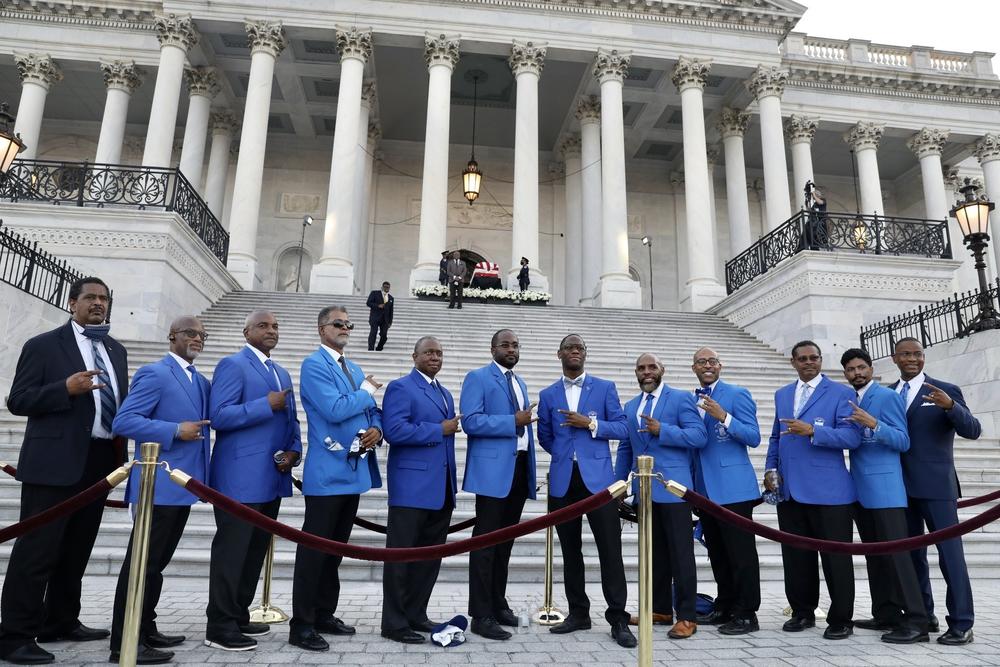 Caption
Members of Phi Beta Sigma, Rep Lewis' fraternity, hold hands and prepare to sing their fraternity's song. The members of the fraternity were from Fairfax, Va. and Montgomery County, Md.

Several lawmakers, virtually all wearing face coverings as a precaution amid the ongoing coronavirus pandemic, attended a private ceremony at the Capitol. Some wore masks that read "Good Trouble" — a mantra Lewis repeated often to encourage others to speak up and take action against oppression.

The moment was not lost on House Speaker Nancy Pelosi, who referred to Lewis as "a titan of the civil rights movement."

"Under the dome of the U.S. Capitol, we have bid farewell to some of the greatest Americans in our history," Pelosi said. "It is fitting that John Lewis joins this pantheon of patriots, resting upon the same catafalque of President Abraham Lincoln." 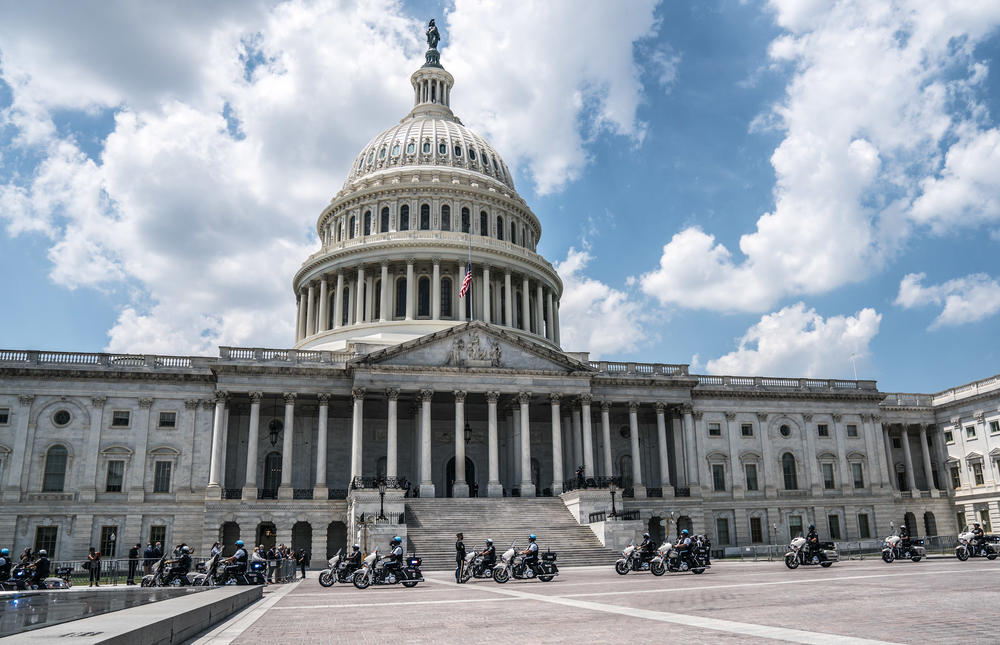 Caption
The police motorcade for Lewis arrives at the Capitol. 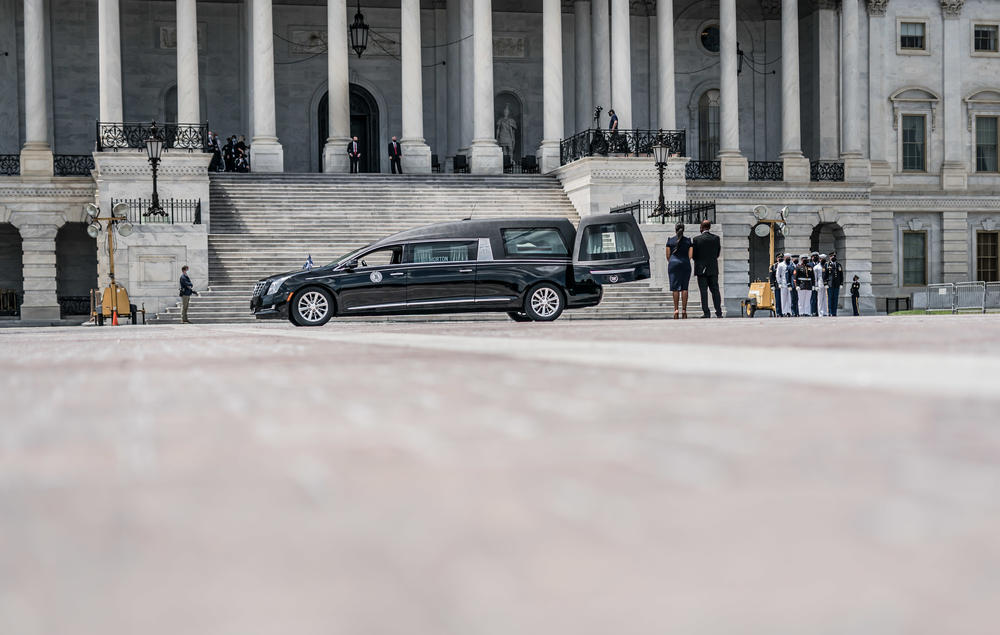 Caption
The remains of Lewis arrive at the Capitol as everyone stands for a moment of silence. 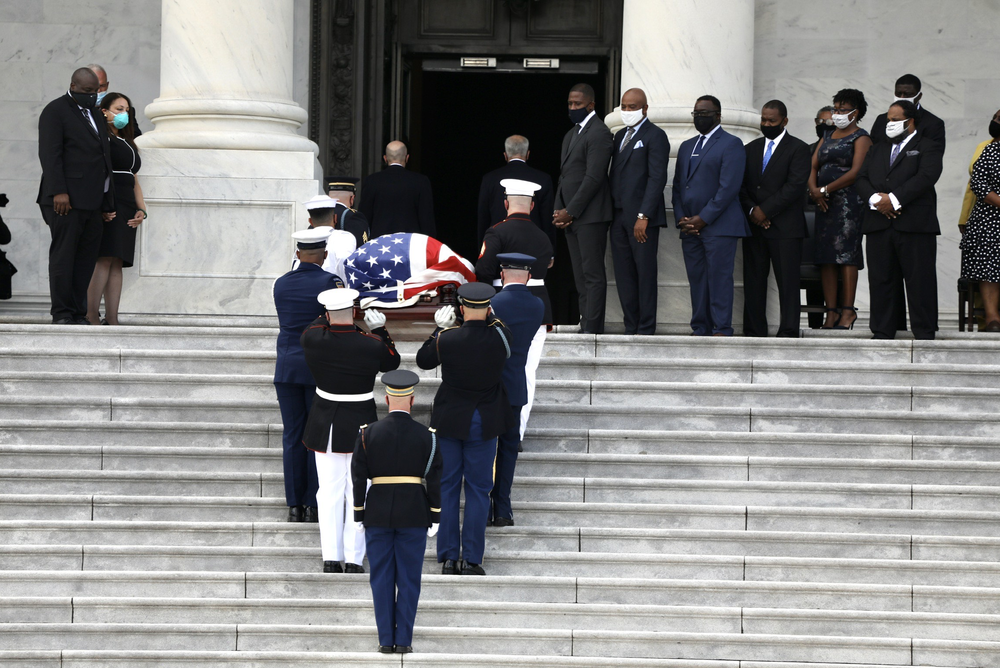 Caption
Family members watch as the American flag-draped casket of the late Rep. John Lewis, D-Ga., is carried by a joint services military honor guard outside the U.S. Capitol before a ceremony Monday in Washington, D.C. 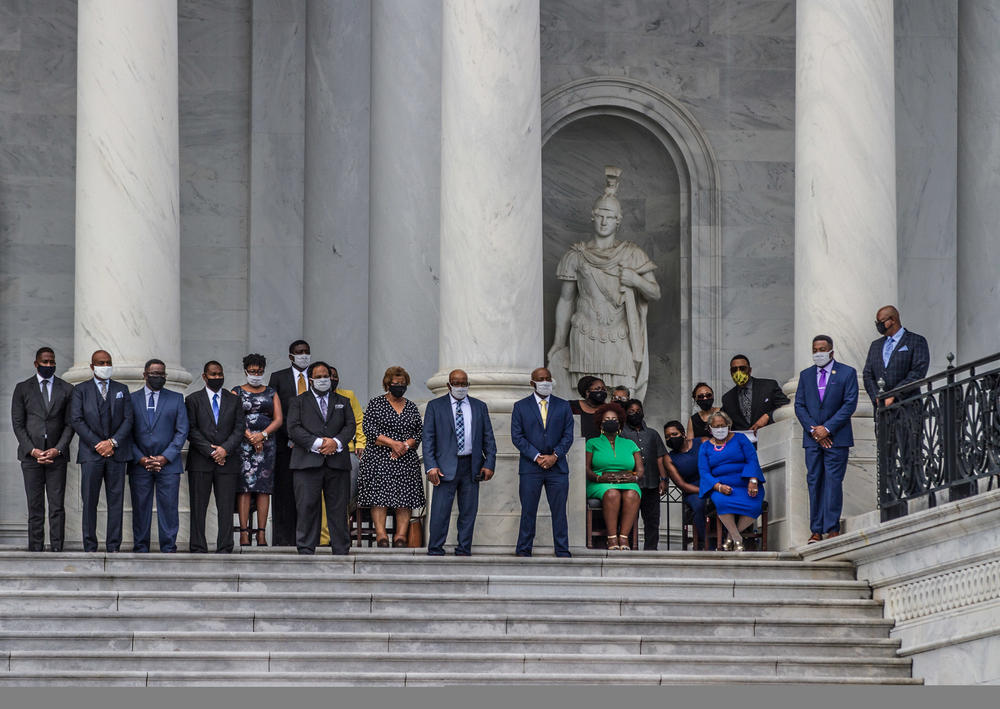 Caption
Friends and family members of Lewis watch as the honor guards brings the congressman's remains inside the Capitol.

Pelosi said Lewis was beloved by colleagues in both chambers of Congress and on both sides of the aisle.

"We knew he always worked on the side of angels, and now we know that he is with them," Pelosi said.

Senate Majority Leader Mitch McConnell echoed that sentiment. He recalled being on the National Mall during the March on Washington when Lewis' voice "echoed across the Mall."

"I wonder how many dared imagine that young man would come to walk the halls of the Congress," he said. 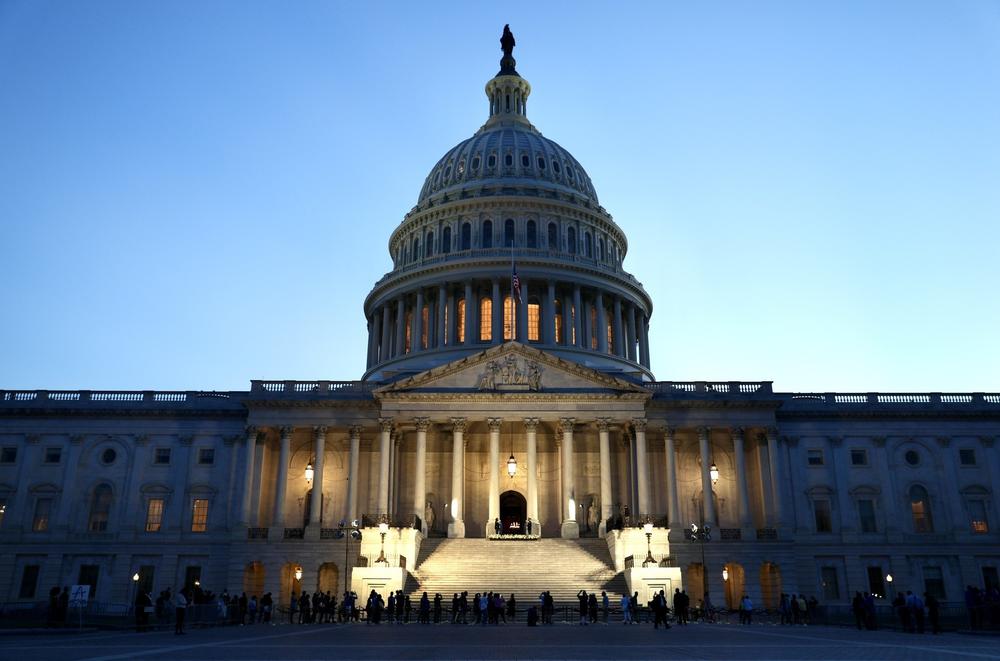 Caption
Members of the public view the flag-draped casket bearing the remains of Rep. John Lewis (D-GA) at the East Front Steps of the U.S. Capitol.

The top Republican in the Senate also highlighted Lewis' work fighting injustices before his arrival in Congress. Lewis was arrested during demonstrations against segregation at lunch counters in Nashville, Tenn., McConnell noted, and harassed in states such as South Carolina and Alabama.

"John Lewis lived and worked with urgency because the task was urgent," McConnell said. "But even though the world around him gave him every cause for bitterness, he stubbornly treated everyone with respect."

A public viewing is being held outside, at the top of the East Front steps of the Capitol following the service. A second public viewing will take place from 8 a.m. to 10 p.m. Tuesday. Both public events are requiring social distancing protocols be followed by those in attendance. 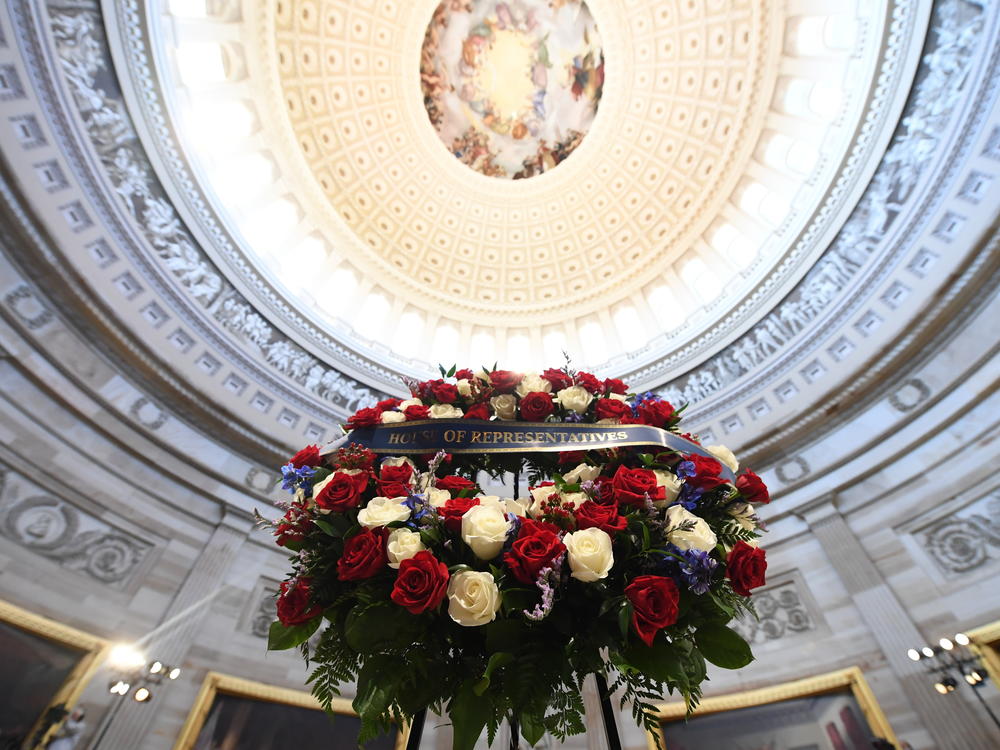 Caption
A wreath is shown before the start of a memorial service Monday for Lewis in the Capitol Rotunda.

Lewis' body will lie in state at the Georgia state Capitol Rotunda for a ceremony Wednesday. A funeral service is set for Thursday at Atlanta's Ebenezer Baptist Church, where the Rev. Martin Luther King Jr. was once co-pastor.

The events in Washington follow days of tributes for Lewis in Alabama. On Sunday, a horse-drawn carriage carried his casket on a final trip across the Edmund Pettus Bridge in Selma, Ala. 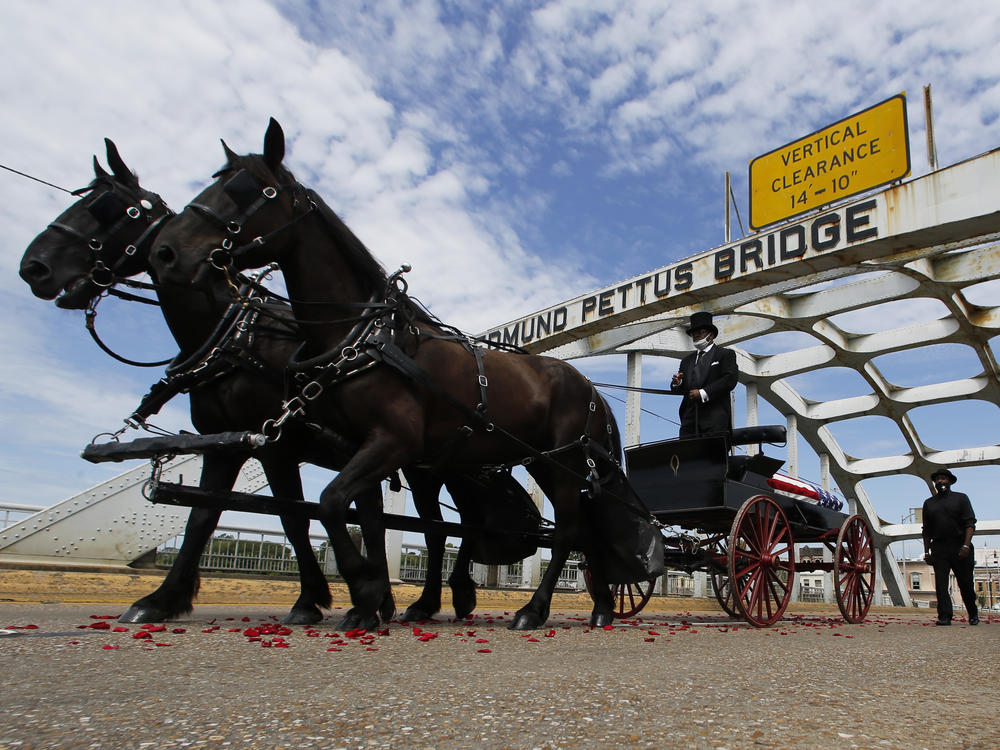 Caption
Lewis' casket crosses the Edmund Pettus Bridge via horse-drawn carriage during a ceremony Sunday in Selma, Ala.

Alabama state troopers saluted Lewis as his casket made its way across the bridge, led by a trail of red rose petals.

It was as stark contrast to the way Lewis and hundreds of other marchers were met when they crossed the bridge in 1965 demanding that Black residents be given the right to vote.

Lewis and others were violently beaten by law enforcement on the bridge in a day that came to be known as Bloody Sunday. 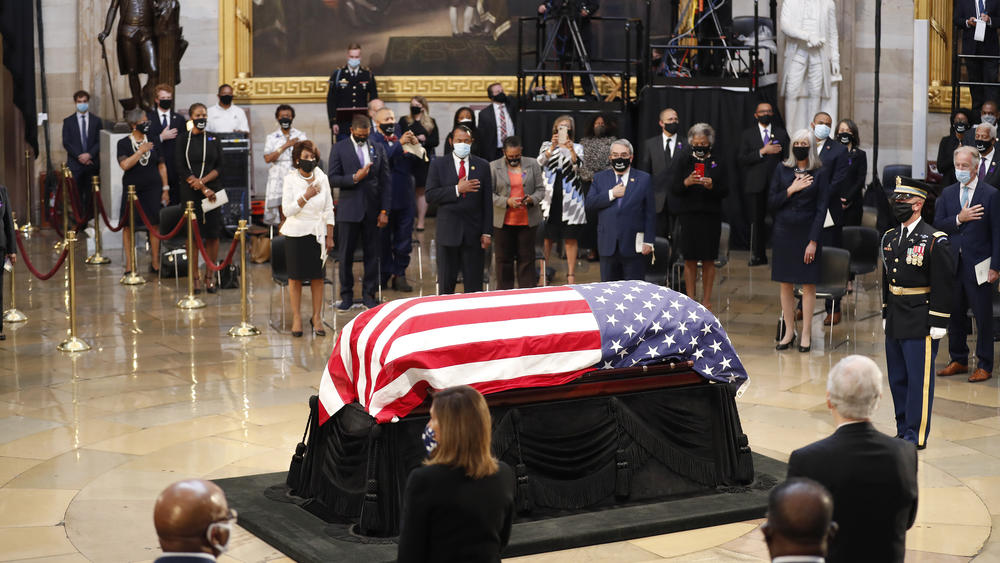 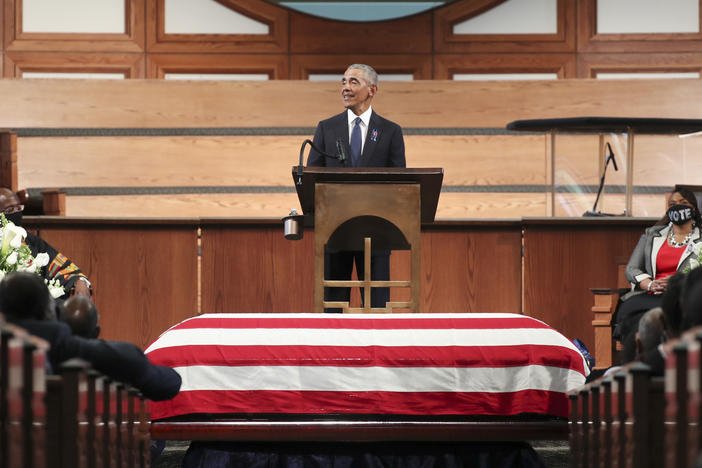 "He, as much as anyone in our history, brought this country a little bit closer to our highest ideals," former President Barack Obama said of the longtime congressman and civil rights legend. 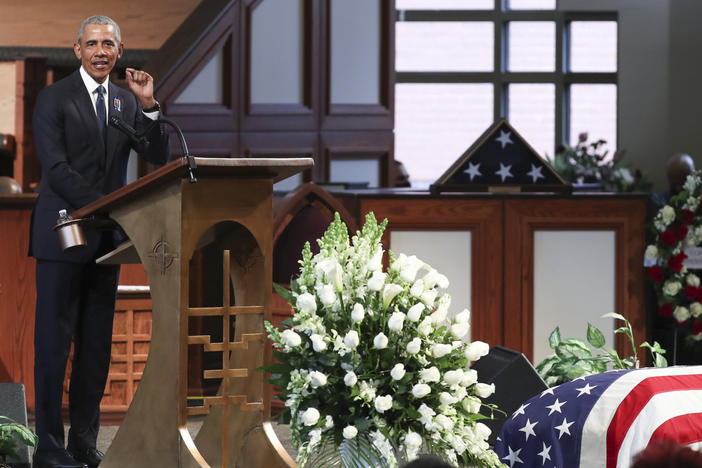 "Naming it the John Lewis Voting Rights Act — that is a fine tribute," former President Barack Obama said. "But John wouldn't want us to stop there."