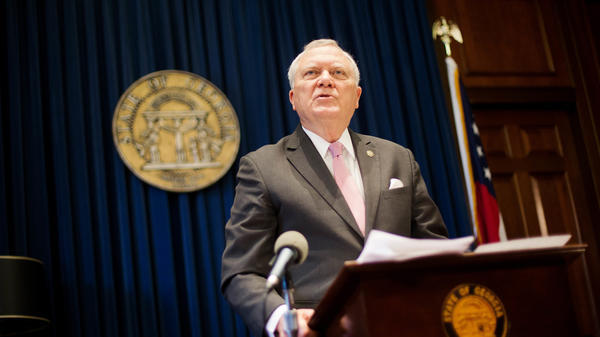 Caption
Gov. Nathan Deal at a press conference in March.

Governor Nathan Deal continues to defend his school takeover plan despite recent opposition from districts around the state.

At a meeting of educators in Atlanta on Thursday, Deal said local districts aren’t responsive enough to the parents of children in poorly performing schools.

Deal asked, “How many of those parents who have children in chronically failing schools would be put on the agenda to speak and complain at a local school board meeting? If you think there are many of those, you have more confidence in the system than I do.”

About half a dozen districts, from Chatham County to Cherokee County, have balked at the idea. They say that local districts are best able to serve their schools’ parents and students.

Deal’s proposal would allow the state to take control of schools that have low marks on Georgia’s College and Career Ready Performance Index and put them in a so-called Opportunity School District run by a state superintendent.

An amendment to the state’s constitution still stands in the way of putting the plan in motion. Voters will decide whether to approve the amendment November 8.

At the meeting Thursday, Deal also questioned whether districts could be trusted to properly allocate money for things like teacher pay raises

Georgia’s fiscal year 2017 budget included $300 million for school districts to cover personnel costs, which lawmakers said should go to eliminate furlough days and increase teacher pay. But districts were given the ultimate say on how to spend the funds, and the Atlanta Journal-Constitution received reports that many teachers never saw raises.

Deal used those reports as ammo against local districts.

“The general assembly and I have lost our patience on trusting local boards of education and superintendents to do what we give them the flexibility to do when they don’t follow through,” he said.

He warned future budgets that included money for raises would have that money specifically earmarked for that purpose.