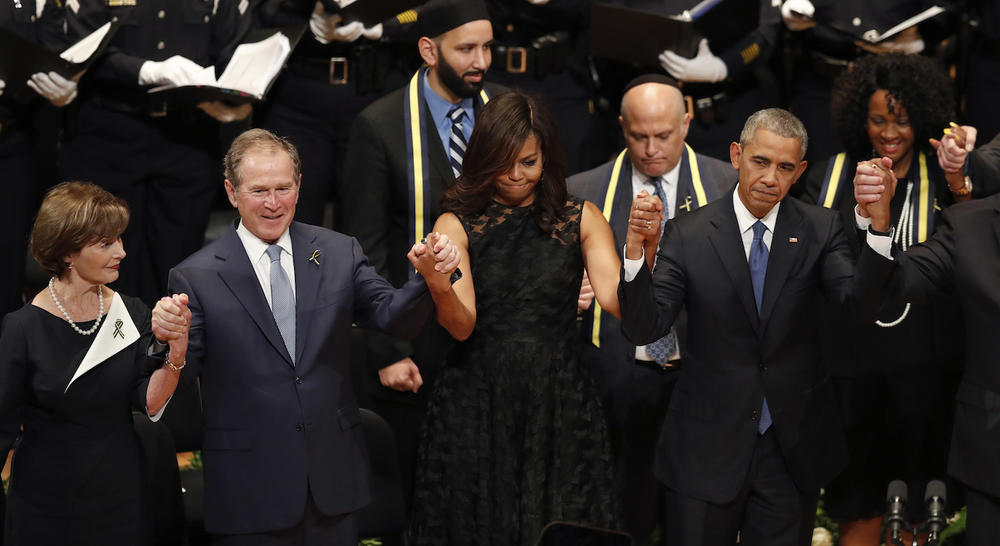 We begin by discussing the impassioned calls for unity that came from Tuesday's Dallas memorial service. Will the remarks given by President Obama and former President Bush greatly affect the rhetoric of the current presidential campaigns? Have Trump or Clinton shown the same kind of leadership in their responses to the Dallas shootings?

The GOP platform has moved to the far right, arguing for no women in combat roles, conversion therapy for parents who think their kids may be gay, and the further endorsement of traditional marriage. Trump’s influence is felt throughout. AJC Political Writer Jim Galloway joins us by phone from Cleveland with an update on the GOP platform committee and rules committee dealings.

In presidential campaign news, Trump made a public appearance with Mike Pence on Wednesday, further fueling speculation over who will be his running mate.

In response to more of his platform being adopted by the Democratic Party and the Clinton campaign, Bernie Sanders formally endorsed Clinton on Tuesday, saying that he will do everything he can to make sure she is elected in the fall.

Finally, we welcome Rev. Gerald Durley to our show as we comment on the plight of racial tensions in Atlanta. Durley has been an active go-between in dealing with police, government officials, and protestors in the Black Lives Matter demonstrations in Atlanta. He provides insight on the level of engagement Mayor Reed and Governor Deal have shown with the protestors, and how for Deal, in particular, his relative silence could impact the longevity of citizen unrest.