GPB Game of the Week: Roswell at Collins Hill 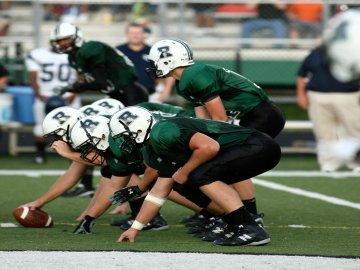 Familiar foes will meet again on Friday night when the Hornets travel east to face the Eagles. Collins Hill is planning a "Black Out" for the fans and the team will be wearing black jerseys to add to the excitement.

These two teams met last year in the first round of the playoffs when Roswell ended Collins Hill's season with a 30-27 win. Despite falling behind 21-6 in the fourth quarter the Rams stormed back and forced overtime, as quarterback Taylor Heinecke threw two touchdown passes during the rally.

The two schools are on opposite ends of the tradition spectrum, as Roswell has won two state titles in several decades of competition, while Collins Hill first began to compete in 1994 and has yet to make the finals. However, the Eagles have been a staple in the postseason since their inception.

Some players to keep an eye on are Heinecke and WR Jeffrey Glover of Collins Hill while Roswell will feature LB Julian Boyd and OL Joseph Turner. Heinecke and Turner just so happen to be members of the metro Score 44.

Fletcher Proctor will be joined by Bob Houghton on the call.