Hidden History: Winecoff Hotel Fire and What Rose From Its Ashes 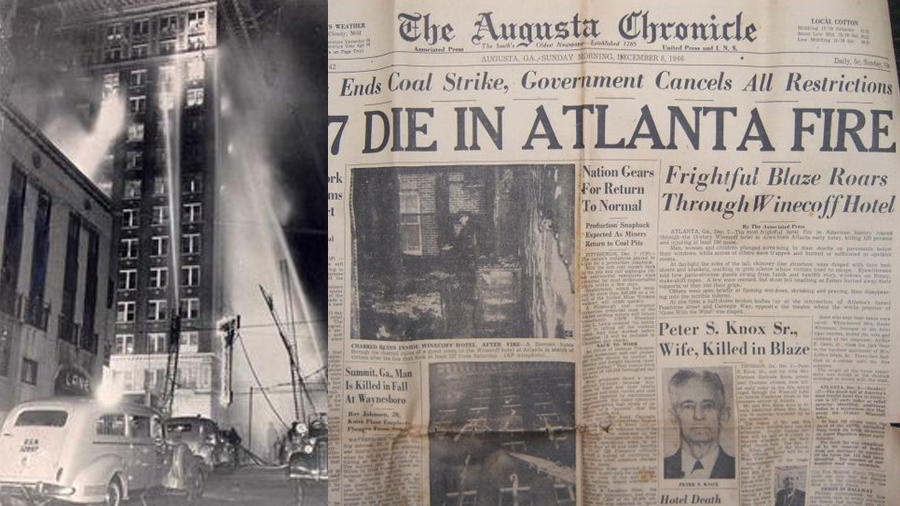 It’s high tourist season in Savannah and our many hotels are bustling. Stan Deaton, senior historian for the Georgia Historical Society, says that one key safety innovation for hotels rose from the ashes of a hotel tragedy right here in Georgia.

“The Winecoff Hotel fire happened 70 years ago that people of a certain generation will remember,” Deaton said. “It is the deadliest hotel fire in U.S. history. There were not modern building codes, so it was a 15-story hotel that had a single stairway – only one means of egress. And early morning of December 7th a fire broke out on the 3rd floor so basically everybody from the 3rd floor up was trapped in that building.”

Firefighters answered the alarm. “And they noticed people were already panicking,” Deaton continued, “Beginning to either try to tie sheets together or jump out of the building from upper floors. It was really a tragedy in the making because many of the fire ladders would only reach up to the 9th floor.”

“There were 304 guests checked into the hotel that night and 119 of them died,” Deaton recalled. 30 of the victims were top high school students in Georgia who were attending a YMCA event in Atlanta. The tragedy made news in Georgia and around the country.

“So President Truman, shocked by this event, called for a gathering of fire safety code authorities to look at and revise the way buildings were built,” he said. “So the great thing that came out of this tragedy was that this would never happen again. There were sprinklers that were put into hotels, fire escapes, fireproof doors that would close.”

Hear more about the Winecoff Hotel Fire in the audio link below. Learn more about Georgia Historical Society at GeorgiaHistory.com.