The Science and Business of Charles Herty and Georgia's Pine Trees 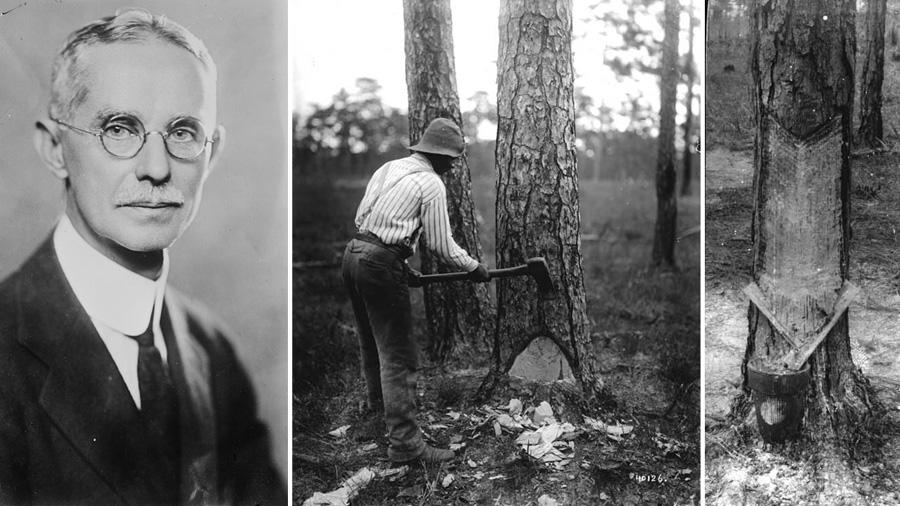 No matter where you travel in Georgia, you’ll see pine trees. Sophia Sineath, education coordinator for Georgia Historical Society, says one Georgia entrepreneur, Charles Herty, spent his life working to make the most of this natural resource.

“He was born in Milledgeville, Georgia, in 1867 – so not long after the civil war," Sineath said. "He grew up in Milledgeville and then he went on to study chemistry at the University of Georgia and Johns Hopkins (University).”

“He then went on to save the naval store industry in Georgia by inventing what we today call the Herty Cup," she continued. "It was a humble ceramic pot – it looks like a pot you would garden with, with a hole in it. And it was used to collect resin from pine trees.” That resin was then turned into turpentine, which was used heavily during World Wars I and II. “What’s amazing about this simple design is that it was able to extract the resin without completely killing the trees, unlike the boxing system that was used before which caused a lot of damage," she explained. "So he kept our state from deforestation at a time when it was on the verge of deforestation, and helped resurrect the naval stores industry with that small innovation.”

“Later, in Savannah, he opened the Herty Foundation Laboratory because everyone told him it is impossible to make white paper or newsprint paper out of pine trees," Sineath continued. "You can only do it out of hardwoods from the north.  He defied them. He got funding, he cobbled it together, opened up an experimental lab here and proved that you could make newsprint paper out of young pine trees.”

Hear more of our conversation with Sophia Sineath, including how Charles Herty influenced UGA football, in the audio link below. Learn more about Charles Herty and his innovations when you visit Georgia Historical Society online.