Hidden History: Sequoyah and His Invention of the Cherokee Syllabary 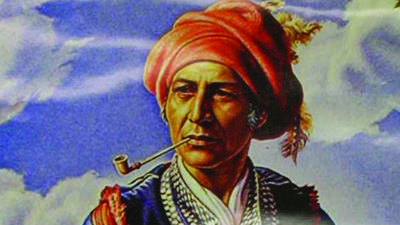 “Sequoyah was born in 1770 in present day east Tennessee,” said Ms. Sineath. “He was the son of a Cherokee mother and had a white father. He never was taught to read or speak English. He spoke Cherokee but at the time the Cherokee language was purely an oral tradition.

“His interactions with English speakers,” Ms. Sineath continued, “especially in the Creek war, made him curious about their ability to share ideas over a distance. And despite never having learned any written language before he invented eighty-six characters to represent the different sounds in the Cherokee language and taught that writing system to his daughter. He was able to use his daughter and show how quickly she learned it. He was able to send her messages over writing to teach others in his community about the power that they could have if they had a written language.

“There were a lot of other members of the Cherokee community who were against it,” explained Ms. Sineath. “They did not want to change their tradition or adapt a writing system but that only seemed to drive Sequoyah further to make it happen. But in 1821 the tribal council approved his syllabary. And it wasn’t much later, in 1828, that the very first newspaper printed in that language that Sequoyah had invented just years before was printed right here in Georgia at New Echota. It’s now a state park where you can visit and learn about that story of the Cherokee Phoenix being printed there and the legacy of Sequoyah and his invention of a writing system.”

Listen to more of our conversation here.

The music that underscored this piece is “Cherokee Morning Song 1” by the traditional Cherokee group, Walela, from their self-titled album.

Learn more about Sequoyah and his Cherokee Syllabary when you visit New Echota State Park.

And learn more about Georgia Innovators and the Georgia History Festival when you visit Georgia Historical Society online at http://www.GeorgiaHistory.com.